REAL WORLD GARDENER Wed. 5pm 2RRR 88.5fm Sydney, streaming live at www.2rrr.org.au and Across Australia on the Community Radio Network. www.realworldgardener.com
Real World Gardener is funded by CBF, Community Broadcasting Foundation.
REALWORLD GARDENER NOW ON FACEBOOK
The complete CRN edition of RWG is available on http://www.cpod.org.au/ , just click on 2RRR to find this week’s edition.
The new theme is sung by Harry Hughes from his album Songs of the Garden. You can hear samples of the album from the website www.songsofthegarden.com 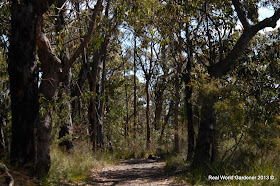 You look after your garden right but what about the natural bushland in your area? Who looks after that? Are there plenty of weeds in the bush around your area or is there  a distinct lack of bush or native vegetation.


Is your area a gateway to your heaven? A comment on our facebook page lists Eden as the gateway to their heaven. Eden to Bombala up Mt Darrugh Rd through beautiful Cool Temperate Rainforest-spectacular. But nothing...I mean nothing... can compare to the absolutely vast and awesome beauty of the alpine snowy mountain ranges between Bombala and Cooma. At last peace and solitutude.
Does that sound like your surrounding countryside?
If your place needs some TLC, you can change all that by being involved in Bush Regeneration or landcare? Let’s find out more….

Podcast Powered By Podbean
You can find out more about joining groups at www.aabr.org.au or at www.landcarevic.net.au and www.landcarensw.org.au  and www.landcare.org.au for Queensland.
We’d love to your bush regeneration stories, just send them in to. realworldgardener@gmail.com or write in to 2RRR P.O. Box 644 Gladesville NSW 1675,  or post them on Real World Gardeners facebook page, and I’ll post a CD in return.

Well it’s TIME FOR VEGETABLE HERO -  Endive-the bitter version of lettuce or is it?
Cichorium endivia is a leaf vegetable belonging to the daisy or Asteraceae family.
That means that should your Endive bolt to seed, or you let a few go to flower, you’ll attract beneficial insects to your garden that’ll control your pest population.
Endive is a green leafy plant that looks a lot like frizzy and crinkly lettuce with a slightly bitter taste. If you don’t like bitter notes in your food I’ll tell you how you can grow it without turning bitter a little later.
Did you know that Endive is a cool weather green, because like hearting lettuce, it bolts to seed in warm weather?
Now is the perfect temperature to sow the seeds of Endive.
Traditionally lettuce is eaten raw but Endive can be cooked or used raw in salads.
Belgian endive was first produced in 1830, by accident. The story goes that a Brussels farmer, stored chicory roots in his cellar, intending to dry and roast them for coffee (a common practice in 19th century Europe). But when he returned to his farm after serving in the Belgian War of Independence, he found that the roots, had sprouted small, white leaves. He took a taste and found the leaves to be quite tasty and crunchy.
The market stalls of the capital began to display this new vegetable in 1846, and it quickly became known as Brussels endive.
There are three main varieties of cultivated endive:
(i)Frisée or Curly endive, (var crispum) and Escarole or broad leaved endive. (var latifolia.) 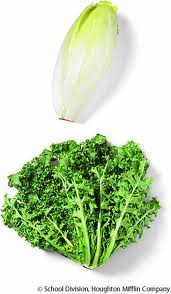 Curly Endive has narrow, curly outer twisted leaves that are firm and bitter to taste. The outside leaves are dark green, while the core can be yellow or white.
(ii)  Escarole, or broad-leaved endive (var latifolia) has broad, pale green leaves and is less bitter than the other varieties. Broad-leaf Endive consists of a bunch of thick broad leaves that are coarse and slightly tough in texture.
This type of Endive is eaten like other greens, sauteed, chopped into soups and stews, or as part of a green salad.
(iii)Belgian Endive or Witloof is really quite different to the other types of endive, with a narrow, lightly packed pointed head that looks like a spearhead.
Witloof as I’ve seen it called ranges in colour from pale yellowish-green to white.
But whatever type of Endive you grow, you’ll find that’s it’s dead easy, like a lot of lettuce type vegetables.
If you grow Endive yourself you’ll save money because it tends to be the more expensive of the greens in the supermarket or greengrocer.
Are you asking when shall I put in the seeds of Endive ?
For Tropical, sub-tropical and Arid areas, sow your endive seeds from April to July,

In temperate zones, March until May, then again in early Spring, and in cool temperate districts you had March, possibly still try in April, but unless you have a greenhouse of some sort, wait until September, October.

Endive is best planted at soil temperatures between 15°C and 25°C. and should be ready to pick in 10-11 weeks.
Endive seeds are very fine but try and spread the seeds as thinly as possible directly into the garden.
Cover the seeds with a very fine layer of sieved composted or seed raising mix.
Water lightly, and keep soil moist. Thin plants to 15cm apart, in rows 45cm apart.
Tip: Some people sprinkle the seeds on top of a fine soil, and just water them in.
You can start endive in punnets or trays just as you would for heading lettuce and transplant later if you want.
If you’re doing the punnet thing, spray them daily with a fine mist of water until the seeds germinate, transplanting them about 20 - 30 cm apart
Like other greens, endive tastes best when it grows fast.
to do this, make sure it gets enough water and fertilizer.

Don't want Bitter?
The slightly bitter taste can add zing to a salad bowl but if you’re not into bitter tasting lettuce, you can take out the bitterness by blanching.
Not in boiling water, but out in the garden.
Blanching is a technique used in vegetable growing.
Young shoots of a plant are covered to exclude light, so that they don’t produce as much chlorophyll, or the green stuff in leaves.
The result is leaves that are paler in colour.
Blanch by tying the leaves together or cover with a large pot for about 3 weeks.
Tip: An easy way to blanch your endive is to cut off the top and bottom of a milk carton and pop it over your Endive plant 1-3 weeks before they are ready. That should be about 7 weeks after you sowed the seeds, so put a note in your diary.
That way, the stems will be whitish and not so bitter.
Why is it good for you?
Endive is rich in many vitamins and minerals, especially in folate and vitamins A and K, and is high in fibre. Endive is low in saturated fat and cholesterol, a great addition to your weight loss program.
HAPPY, WATERING, FERTILISING, MULCHING AND ULTIMATELY HAPPY SNIPPING WITH YOUR SUCCESS IN GROWING ENDIVE. AND THAT WAS OUR VEGETABLE HEROE If you have any questions about growing beets or chicory or any other vegetable, realworldgardener@gmail.com 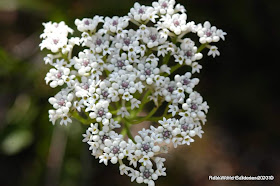 with Landscape Designer Louise McDaid
This month, Design elements is still fixing your garden design problems that are based on soil conditions in your garden.
You might have light coloured sandy soil, or red or black coloured heavy clay type soil, or maybe your soil is limey and quite alkaline.
You could have a mix of a few types of soil profiles depending on your site.Each one of these soil profiles has advantages and disadvantages.
Today we’re discussing sandy soil.Let’s find out how to garden with this particular soil profile in garden? 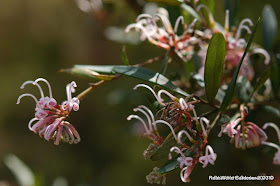 Sandy soil might be easy to dig but also dries out very quickly and is usually a lot poorer in nutrients that heavier types of soils.
Adding sand to clay soils doesn’t improve clay soils, it just makes sandy clay, and that’s just a bad combination.

There’s quite a few things you can do to improve sandy soil profiles, but remember if you try and do it all at once it’ll overwhelm you and you’ll feel like giving up. Be like the tortoise, easy does it, and a bit at a time. Over time, you’ll manage the conditions and have a fabulous garden, guaranteed/

Beautiful Buddlejas, with their large colourful, perfumed flowers, have been a staple in gardens in Australia for  many generations.
Some gardeners gave up on them because they grew quite big and if left unpruned became rangy and straggly.

You had to know when to prune them, and often a really hard prune was essential for new growth and more flowers.
Then when the flowers finished, the bush looked nothing special for a while before until it put on new growth and flowered again.

Some of us kept on hankering after Buddlejas because of the perfumed flowers that attracted a range of butterflies and bees., and kept on growing them. 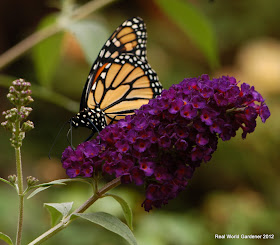 My fave is still Buddleja ‘Black Knight”  with it's deep purple flowers you see in the photograph with the Monarch butterfly. Yes, taken in my garden.
It’s hanging in there for about 5-7 years.
As a cut flower they last in the vase no more than a few days, but I like the fragrance and the butterflies it attracts.
Besides, the really dark rich purple colour, the perfume is heavenly! But I'm not overly fussed about the constant pruning to get the flowers. 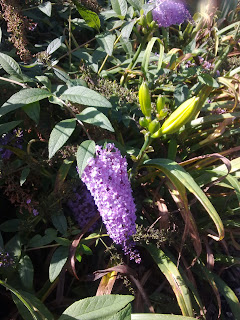 The plant breeders selected the best types that had been collected in China. They were looking for dwarf varieties, with good flower colour and lots of them.
Why dwarf? The trend for smaller gardens and the clamour for more flowers!

These Buddlejas like the same conditions as the older types, that is, full sun or part shade, but are true dwarf Buddlejas that can be kept under 1 metre with little pruning.
Buddlejas grow in most types of soil, but will do better if you add some compost to sandy soil.
You also need to keep Budlejas well mulched and water during dry periods, because they definitely will wilt, and possibly die under prolonged dry conditions.

In winter temperatures to 5°C are tolerated but heavy frosts will cut them back. 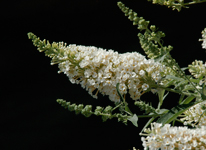 If you want to grow them in Canberra, grow them in containers on your patio or veranda.
For the new type of Buddlejas, all you need to do during the yearx is trim back the older growth when flowers are showing signs of slowing off and getting smaller.
Fertilise in spring after the main pruning to encourage new faster growth.
While older Buddleja varieties grow 2-4 metres tall, BUZZ® varieties stay between 1-1.2 metres tall and can be pruned to shape.
The best thing is although  the plants are a third the size of old varieties, the flowers remain the size of the standard types.
So now plant lovers with small gardens can enjoy the showy and scented flowers in garden beds, in large pots or as cut flowers.
These new varieties are BUZZ® Sky Blue Cool sky-blue flowers, BUZZ® Ivory Creamy-white flower spikes and BUZZ® Purple Luscious deep-purple flower spikes.