REAL WORLD GARDENER Wed. 5pm 2RRR 88.5fm Sydney, streaming live at www.2rrr.org.au and Across Australia on the Community Radio Network. www.realworldgardener.com
REALWORLD GARDENER NOW ON FACEBOOK
The complete CRN edition of RWG is available on http://www.cpod.org.au/ , just click on 2RRR to find this week’s edition. The new theme is sung by Harry Hughes from his album Songs of the Garden. You can hear samples of the album from the website www.songsofthegarden.com

with Margaret Mossakowska from  Vivid Edible Gardens
How does your garden cope over summer? What about you the gardener?
Are you too exhausted to go out there and tend to those veggies and flowering plants?
Every now and then, I ask someone like Margaret from a permaculture background to give us gardeners a different slant on what we should be doing.
Let’s find out more about summer gardening

As you finish picking vegetables planted in late winter and early spring, you'll be thinking about what to plant for summer.
This is the time for unusual heat lovers like okra, rosella ( if your climate allows), snake beans and eggplant or the regular well known sweetcorn, capsicums, chillies, pumpkins and melons. Be sure to select heat-tolerant varieties of other vegetables such as lettuce and tomatoes if you decide to keep growing.
You might want to put up some shade cloth to protect more sensitive veggies in the sunniest parts of the day or maybe an umbrella or two.

Another idea is to plant up large pots or tubs in a part shade position to keep some salad ingredients going over the summer.
Margaret also mentioned protecting your fruit from fruit fly with exclusion bags, exclusion netting and pheromone traps. The pheromone traps only target the pest and not the good bugs like lacewings and ladybirds.
If you have any questions about your veggie garden or a photo, send it in to realworldgardener@gmail.com or write in to 2RRR P.O. Box 644 Gladesville NSW 1675.

Believe it or not, I’ve never devoted this segment to growing melons so I’m going to correct that.

Did you know that the first melons were only the size of an orange, way back in 2400 BC in Egypt? 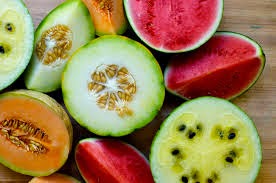 Just like pumpkins, melon vines have separate male and female flowers that are pollinated by honey bees.
Did you know that the watermelon is 92% water?
You might know of something called lycopene which tomatoes are supposed to have a lot of.
Lycopene is an antioxidant compound that gives tomatoes and certain other fruits and vegetables their colour.
But, did you know that Watermelons have now been declared the fruit or veg with the highest amount of lycopene?
Just 1 ½ cups of ripe, red watermelon contains 9 to 13 milligrams of lycopene, which is approx 40 percent more than raw tomatoes.
Lycopene has been linked to reduced risk of heart attack and certain cancers. 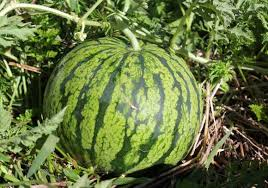 Have you ever wonder how seedless watermelons are grown?
Seedless watermelons were developed over 50 years ago, and they have few or no seeds.
It’s all in the chromosomes and in commercial nurseries they cross particular plants to get a fruit without seeds.
Technically they cross a diploid plant (one with two sets of chromosomes) with a tetraploid plant (having four sets of chromosomes) giving a fruit that produces a triploid seed (with three sets of chromosomes). This triploid seed  produces seedless watermelons.
Pretty involved isn’t it but it’s crossing plants and not genetic modification, and can occur in nature.
The male flower on the seedless watermelons are sterile, so pollinator plants (ie watermelons plants that will grow seeds) are interspersed with the crop so it’ll get pollinated and set fruit.
In a field growing seedless melons roughly 25% of the plants are seeded varieties and 75% are seedless varieties (grown from triploid seeds).
Hives of bees are brought into the fields to cross-pollinate.  Without this cross-pollination, the seedless watermelon plants would not produce fruit.
When to grow
In sub-tropical climates from August to January, in temperate climates from September until December, in cool temperate zones from October until early January, and in arid zones, from September through to March.
And as seems to be the usual over the last few weeks, tropical climates must plant melons in the dry season-that is over winter.
Growing melons
Melon vines need a fair bit of space with each one covering an area that is about 1m x 1m.
This could even be in the back corner of the garden, providing there is direct sunlight.
If space is an issue, a trellis or frame can be built which the vine will climb.
When planting out your seeds, do the same as you did for squash by using the mound method to deposit several seeds.


. The mounds by the way are about 1m wide and 20cm high.
Melons have a poor germination rate so this is good insurance.
Melons generally are less tolerant of acidic soils than other vegetables and the pH should be 6 or higher.
Melons need high levels of nutrient in the soil – composted manure or complete organic fertiliser, and good air circulation.
Chook poo is the best for melons and should be mixed through the soil before planting.
All melons have reputedly poor fruit set so you need to have them in an area where there are lots of bees (for pollination), and full sun.
It’s important to get your melon plants growing as much as possible in the early stages, and then to keep them growing when the plants begin to flower.
Your regime should be regular watering and weekly liquid feeding at this time –by follow up feeding with liquid fish emulsion or seaweed products you give those plants a kick along.
Once the plant is producing both male and female flowers and beginning to set fruit, pinch out the ends of the long running shoots.
Here’s a tip from a commercial grower-thin the fruits to a maximum of four fruits per plant when fruits are about 2.5cm in diameter.
Keep your melons shaded-watermelons especially are prone to sun scald.
When is your melon ready to pick?
Do you tap  on the melon to see if it’s got a hollow sound, sniff the end or what?
In fact Rockmelons should be quite fragrant when ripe.
With both Rockmelons and Watermelons the blossom end of the melon (the opposite end to where the stem attaches to the plant) will become soft.
Keep an eye out for the stem which attaches the melon to the plant –this will dry out when the melon is ready.
Watermelons also have a whitish green patch on the fruit where it is in contact with the ground, when this patch turns pale yellow, the fruit should be ready
Melons take about three months to be ready.
Why are they good for you?
Watermelons have no fat or cholesterol and are an excellent source of vitamins A, B6 and C and contain fibre and potassium
Because of the high water content of watermelons they’re a great diuretic-that means they  stimulate kidney  into action to start the process of eliminating toxins.
They are low in fibre with a virtually non  existent fat content. Watermelons also contain the carotenoids lutein and lycopene. Lycopene, the responsible pigment for the red colour in certain fruits, has de-oxidizing properties that help reduce the risk of cardiovascular disease.
As for rockmelons, just one (100g) serve of rockmelon contains a day’s allowance of Vitamin C, and they are a good source of beta carotene.
Honeydew melons are also high in Vitamin C, B6 an folate as well as having some potassium.
TIP:
All melons don’t  ripen after harvest, so they should be ripe when you pick them or when you buy them.

with landscape designer Christopher Owen
Series on Show Gardens-part 1
What’s the purpose of show gardens?
You might think they’re designed to impress but not that practical, but are they?
In this series on show gardens, I talk to Chris Owen who won silver in the Australian Garden Show this year.
﻿

Let’s kick of the series on show gardens.

If you’ve never been to the Chelsea Flower show that’s held in London in May, you might be wondering what show gardens actually are.
Firstly, the Chelsea flower show is the bees knees of show gardens because, everything is perfect.
Everything that can be in flower, is in flower, not a leaf is out of place and designers come from all over the world to display their show garden.
Australia won gold at last year’s Chelsea flower show.
Show gardens at Chelsea are meant to inspire and show what can be done, often with new release plants.
But if you can’t go, you can get a DVD and have a look to see what the fuss is about.
We’ve just heard about one show garden, and over the next couple of weeks, Chris will describe the pitfalls and the benefits to you of visiting show gardens.

with Karen Smith Hort Journal magazine editor www.hortjournal.com.au
The NSW Christmas bush is popular with florists at this time of year because of the bright bracts that cover the bush-just right for this time of the year.
-let’s find out about this plant.

The dwarf species of Christmas bush was discovered some forty years ago growing on a bluff along the NSW coastline.
Apparently the story goes, this stand of Christmas bush looked like they had been there since before European settlement.
Luckily the chance discovery by a horticulturalist meant that several cuttings were collected.
Fast forward many years to a Central Coast nursery where they were being sold or just grown for the owner's pleasure-I'm not sure which. 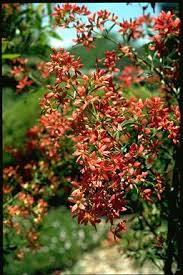 However, a member of the Australian Plant Society chanced on these plants when the nursery was closing down and got those specimens.
Still more years passed before the idea of propagating and selling them came to fruition.
As it happens Ramm Botanicals now propagate Johannas Christmas which is sold to retail nurseries throughout Australia.
The species NSW Christmas bush can grow quite big and isn’t everyone’s favourite plant when it’s not showing the red bracts.
Having a small compact version  like Ceratopetalum gummiferum Johannas Christmas, is ideal and more versatile in many gardens than the bigger parent plant.
From the Ramm Botanicals website:

Johannas Christmas only grows to a metre and likes most soil types but prefers free draining soil.
If planting in a tub,most general purpose potting mixes will suit. 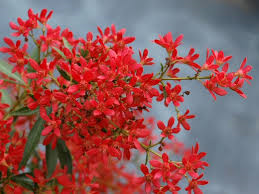 Feed with a controlled-release fertiliser in early spring and perhaps supplement with a liquid feed after flowering.
Johanna’s Christmas likes a full sun position and is not a particularly thirsty plant. In fact, avoid water-logging as the plant can be susceptible to root rot.
If you want to shape the plant, prune in autumn before flower initiation.
Keep plants mulched and protect from heavy frost and harsh afternoon sun

Posted by Real World Gardener at 18:41