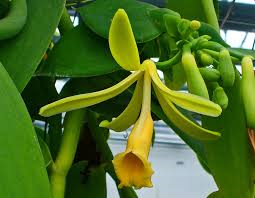 Vanilla Bean Orchid Vanilla planifolia
The plant that this next spice comes from originates in the highland forests of Mexico, so that gives you some idea of where it grows best.
Somewhere warm and humid.
But hey, don’t let that stop you from trying to grow it, after all it’s an orchid.
Let’s find out what’s great about this spice.
I'm talking with spice expert and owner of www.herbies.com.au Ian Hemphill
If you buy imitation vanilla essence then you’re buying a mixture made from synthetic substances which imitate the vanilla smell and flavour.
This often contains propylene glycol which is also found in automotive antifreeze!
It’s mass produced and relatively cheap but, of course, not in the same class as true vanilla extract.

Growing Vanilla planifolia
If you want to try to grow this orchid, you must be sure to get Vanilla planifolia-used to be called Vanilla fragrans.
The flowers are like a skinny Cattleya (that’s an orchid) flower and they’re yellow.
The plant usually doesn’t flower until it’s at least 3 metres tall and it can reach a size of 20 metres and more.
A friend of mine has the variegated one growing in his laundry that faces north.
Seems to be doing pretty well. 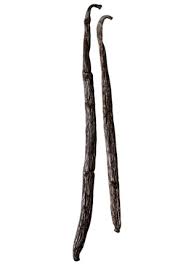 If you're in an area where you can grow this orchid and have it flower, then you'll have to pollinate it yourself to get the vanilla bean.
The only natural pollinator is the Melipone Bee which is native to Mexico and thought to be extinct.
Should your vanilla bean orchid produce a green bean, luck you, but this will have no vanilla flavour.
It takes many weeks of drying and sweating before the pod is ready to be used in cooking.
If you have any questions about growing Vanilla orchids, drop us a line to realworldgardener@gmail.com or write in to 2RRR P.O. Box 644 Gladesville NSW 1675.

Native to Paraguay and other tropical areas of the Americas, the stevia plant (Stevia rebaudiana) has leaves packed with super-sweet compounds that remain stable even after the leaves have been dried.

Stevia is a member of the chrysanthemum family and the Stevia leaves have been used to sweeten teas and other drinks throughout South America for centuries.

So why are Stevia leaves’ so sweet? Because the leaves contain something called steviol glycosides.
Steviol glycosoides are high intensity natural sweeteners, 200-300 times sweeter than sugar.
The leaves of the stevia plant contain many different steviol glycosides and each one varies in sweetness and aftertaste. 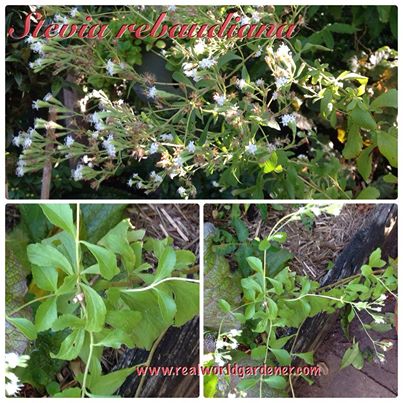 Stevia is a small perennial shrub with lime green leaves that do best in a rich, loamy soil — the same kind that most of your plants in the garden like.

Stevia is evergreen in temperate, sub-tropical and tropical climates, but in cold and arid districts, it’ll lose its leaves in Autumn.
Stevia is native to semi-humid, sub-tropical climates where temperatures typically range from -6°C to 43°C.
Stevia tolerates mild frost, but heavy frosts will kill the roots of the plant.
Since the feeder roots tend to be quite near the surface add compost for extra nutrients if the soil in your area is sandy.

By the way, I’ve grow my stevia plant in a pot for several years now without any problems and it’s survived several bouts of dry hot summers and lack of watering during spells with a house sitter.
But, it really isn’t drought tolerant like a succulent or a cactus and won’t tolerate long term neglect.
During warm weather don’t forget to water it and if you’re going away for a few weeks put in a dripper system, otherwise you’ll lose your Stevia plant.

Stevia plants do best with fertilizers with a lower nitrogen content than the phosphorus or potassium content.
Which means the artificial fertiliser aren’t your best bet, but most organic fertilizers are because they release nitrogen slowly.


HINT: Stevia leaves have the most sweetness in autumn when temperatures are cooler and the days shorter.
Definitely the best time to pick those stevia leaves.
If your district is prone to frosts in Autumn, make sure you cover the Stevia plant for another few weeks’ growth and more sweetness.
How do you store Stevia leaves? If you Stevia plant is big enough, the easiest technique is to cut the branches off with secauteurs before stripping the leaves.
TIP:As an extra bonus, you might also want to clip off the stem tips and add them to your harvest, because they have as much stevio-side as do the leaves.
If you live in a mostly frost-free climate, your plants will probably cope with winter outside, as long as you don’t cut the branches too short (leaving about 10cms of stem at the base during pruning).
These plants do last a few years in temperate and warmer climates.
In cool temperate districts, it might be a good idea to take cuttings that you’ll use for next year’s crop.
Cuttings need to be rooted before planting, using either commercial rooting hormones or a natural base like honey.
Stevia seed is apparently very tricky to germinate, and the cutting method is your best option.

SO HOW DO YOU USE YOUR STEVIA LEAVES?
I should mention that the stevioside content is only 12% in the leaves you grow compared with the 80-90% that commercially extracted stevia has.
It’s still had a decent amount of sweetness all the same.

So you’ve picked the leaves now you need to dry them.
As with drying all herbs you can hang your bunch of leaves upside down in a warm dry place.
Otherwise, on a moderately warm day, your stevia crop can be quick dried in the full sun in about 12 hours. (Drying times longer than that will lower the stevioside content of the final product.)

If you have a home dehydrator use that instead.
Finally crush the leaves either by hand, in a coffee grinder or mortar and pestle that you use for spices and herbs.
The dried leaves last indefinitely! 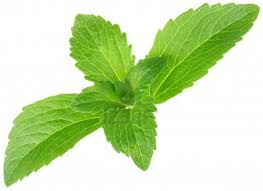 If you add two or three leaves added whole or powdered, that’s enough to sweeten a cup of tea or coffee.
HOT TIP: Another way is to make your own liquid stevia extract by adding a cup of warm water to 1/4 cup of fresh, finely-crushed stevia leaves. This mixture should set for 24 hours and then be refrigerated.

Why are they good for you?
Stevia is a natural sweetener that has zero calories and isn't metabolised by the body.
Stevia isn’t suitable for everything in cooking but you can use it to sweeten drinks, fruits, salad dressings, stewed fruit, yogurt and most creamy desserts.
The processed Stevia that you buy in the shops has been stripped of all the natural goodness that Stevia contains, so it’s better to grow your own Stevia.

AND THAT WAS OUR VEGETABLE HERO SEGMENT FOR TODAY!

Most people would be wary of various species of Eucalypt trees, which can drop limbs without any warning.
But what about other trees that drop limbs?
When the Summer’s are long and hot without much rainfall, trees are stressed.
How can you tell then if a tree is so stressed that a big branch is about to fall off?
I'm talking with Glenice Buck, Consulting Arborist and Landscape Designer of www.glenicebuckdesigns.com.au

Glenice noticed plenty of fallen branches in paddocks near where she lives in Young.
Unfortunately the answer to the question how can you tell when a tree is going to drop a healthy limb, and that is, you can’t tell at all if a tree limb is going to fall.
Perfectly good branches just seem to break off.
The trees are perfectly fine [on the outside] and the inside, they seem to be structurally sound - a lot of the trees that have dropped limbs, you could not pick that they were going to fall.
You would expect that trees that are structurally unsound, are more likely to drop limbs, but as a rule, the normal eucalypts that drop limbs like the red gums and a lot of our box trees, have been dropping limbs with no sign of structural damage at all.

If you have any questions about trees for Glenice, why not write in or ask for a fact sheet.

What Went Wrong with My Worm Farm?

So you’ve now got a worm farm but you open the lid one morning and there’s a mass of short fat white wriggling things?

Too awful to contemplate so I'm not posting a picture of the maggots.
Instead, here's a photo of the nice worms that you should have in your worm farm.] 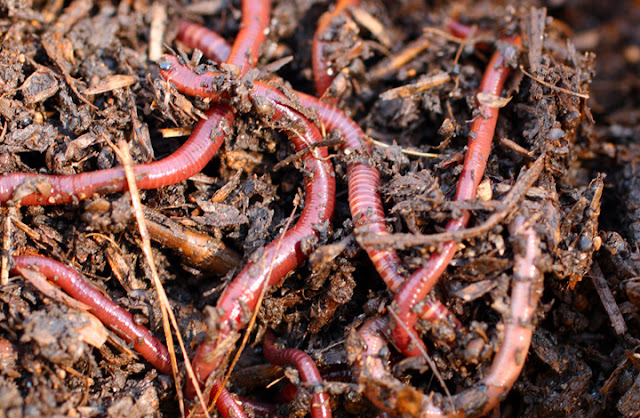 You’re of course horrified and think “How did they get there and why? "
So now let’s find out. '
I'm talking with Sophie Goulding, environment project officer with a local council.


You need to get rid of those wriggling things because they’re maggots and they're there because probably you put that dairy or meat product into the worm farm.
Perhaps you did it on purpose knowing that your chooks will really appreciate a feast of protein that those white maggoty things have plenty of.
But if you didn’t, you’re best bet is to remove the maggots and put them into a small bucket.
Leave them to fry in the sun before adding them back to the compost.
If you don't get rid of them they'll get rid of your worms and there goes your worm farm.
Posted by Real World Gardener at 06:00