Mind Your Beeswax, Rhubarb and Wattle

Join host Marianne and guest Margaret Mossakowska to find out about using beeswax in the Good Earth Segment, growing crowns in Vegetable Heroes. Touching base with a local community garden and a national emblem in Talking Flowers.

Household Uses of Beeswax
Honey isn’t just the only thing that beekeepers produce.


Did you know that beeswax is an important ingredient in moustache wax and hair pomades that make hair look sleek and shiny?
Well, we’re not going into that so how else can we use beeswax around the home other than for making beeswax candles?

I'm talking with Markaret Mossakowska of www.mosshouse.com.au
Let’s find out

Did you know that you can also coat things with beeswax, like hand tools, cast iron pieces and shovels to prevent them from rusting out.
You can even rub beeswax on the wooden handle of your shovel to help protect against wear and tear.
NSW amateur beekeepers associations https://www.beekeepers.asn.au/
The ABA currently has 20 clubs/branches around NSW.
There are also a number of areas where new clubs are being started.
If you need any help finding a club near you, please contact the ABA Secretary.
For listeners outside NSW there’s also a national body, http://www.honeybee.com.au/beeinfo/assn.html
If you have any questions either for me or for Margaret you can email us Realworldgardener@gmail.com or write in to 2rrr, PO Box 644 Gladesville NSW 1675.

Rhubarb  or botanically Rheum x hybridum.
Do you think of Rhubarb as a fruit?


So what is Rhubarb?
Rhubarb-the vegetable used as a fruits, is an herbaceous perennial.
Herbaceous because it dies down in winter except in warm climates, perennial because it regrows  from year to year.
Rhubarb has short, thick Rhizomes –the underground horizontal stem part of the plant.
The leaves are sort of triangular shaped and crinkly with small greenish flowers.
What we all like to eat is the long, thick (and tasty) petioles or stalks.
How do you prefer to eat your Rhubarb?
In sauces or pies, you can actually eat the stems raw in a salad or stewed.
Perhaps Rhubarb and ginger muffins or for something savory, how about rhubarb with pork or chicken with baked rhubarb?
WHEN’S THE BEST TIME TO PLANT RHUBARB?
Rhubarb crowns can be bought and planted in September if you live in, sub Tropical areas,
Temperate zones; July to September-October .
Cool temperate districts August to November in and for once, arid zones have hit the jackpot and can plant Rhubarb from July right through to February. Can’t get much better than that.
In temperate and cool climates the above ground parts of the plant completely withers away during the colder months, so don’t be alarmed, your plant hasn’t died it’s just dormant.
Unless of course the winter has been warmer than usual and you’re growing it in a pot.
It’s probably still got leaves and is flowering now.
But apart from that,you can buy the dormant crowns now and plant them right now.
Rhubarb can be grown in pots as long as the pot is large enough, say 30 cm wide.
In fact there’s a variety called Ruby Red Dwarf that’s perfect for potted gardening because it has short thick stems that are bright red.
IMPORTANT TIP: In case you think you can also eat the leaves-DON’T.
The leaves contain oxalic acid and are toxic.
There’s no safe method of using them in cooking at all.
A few vegetables have oxalic acid but in this case the concentrations of oxalic acid is way too high and it’s an organic poison and corrosive.
Other toxins may also exist.
Rhubarb is usually propagated by planting pieces or divisions of 'crowns' formed from the previous season.
Dividing Rhubarb for re-Planting
If you have a friend that grows rhubarb, ask them to make divisions by cutting down through the crown between the buds or 'eyes' leaving a piece of storage root material with each separate bud.
This is a good way to share your plant with friends. 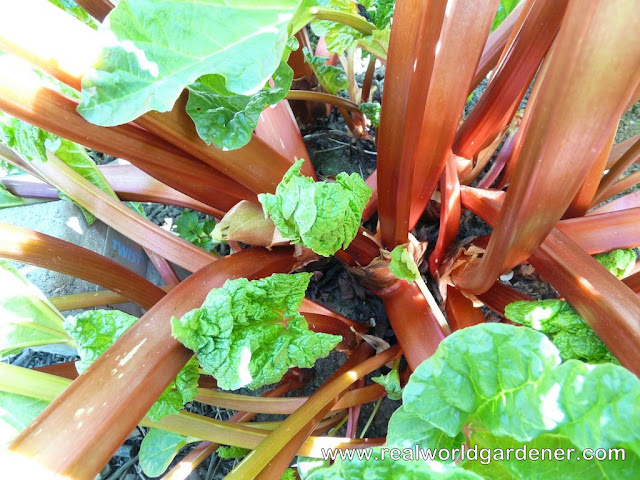 Tip:Use only aged manures, not something fresh from the paddock, or you will get fertiliser toxicity which will stop the plant from thriving and you might even risk losing your rhubarb plant.


You don’t have to dig up your rhubarb plant, as it’ll last for 10-15 years. So plant it in a place that’s permanent, otherwise choose the pot alternative. 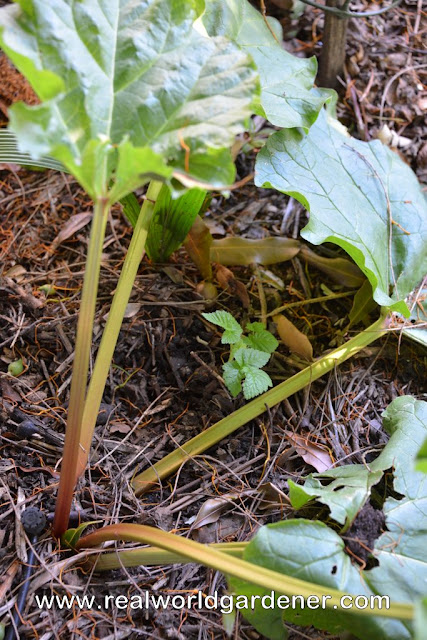 If you really want red stems, and I don’t advocate adding red food colouring to the cooking, either look out for a friend or neighbour with rhubarb that has red stems, and ask for a piece or order some red ones now.

You don’t have to be online, there’s nothing wrong with the post and all companies will be happy to post a catalogue to you free of charge.
There isn’t much that goes wrong with Rhubarb …although some districts may get mites in the leaves or borers in the stem.
Unless you are growing plants in really heavy clay, you won’t get crown rot either.
Some varieties for you to try-and I’ll bet you can’t decide which one-I’m still thinking.
Rhubarb-Big Boy and Mount Tamborine-originally from Queensland and almost never seen in the supermarket-they reckon that the large stems are too big for the shelves.
Rhubarb Cherry Red and Winter Wonder-grown by market gardeners in the Mornington Peninsula hinterland. Sometimes seen at farmers markets.
Why is Rhubarb a vegetable Hero?
The good news is that rhubarb is low in Saturated Fat and Sodium, and very low in Cholesterol.
It’s also a good source of Magnesium, and a very good source of Dietary Fibre, Vitamin C, Vitamin K, Calcium, Potassium and Manganese.
So Apple and Rhubarb Crumble for you then?
THAT WAS OUR VEGETABLE HERO SEGMENT FOR TODAY!

When a community garden sets up in your district are you excited or non-plussed?
What things do they get up to anyway? 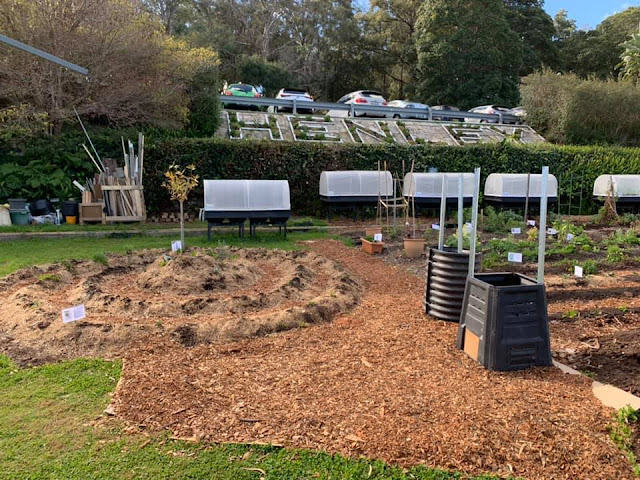 Let’s find out. I'm talking with Nicole Miranda from the Happy Hens Community garden in Henley.
If you are interested in joining the community garden at Henley you need to first register your interest by filling in a form from their website www.happyhens.org.au

Wattles:Acacia species.
Family: Mimosaceae, 1, 000 species out of 1350 worldwide originate originate in Australia.
Australia's Acacias have a huge range of flower and leaf shape. Some have fern like foliage, others have leaves like they should belong on a gum tree.
Flower colour is mainly yellow, followed by cream, but one outstanding cultivar has red flowers.
Acacia leprosa "Scarlet Blaze." 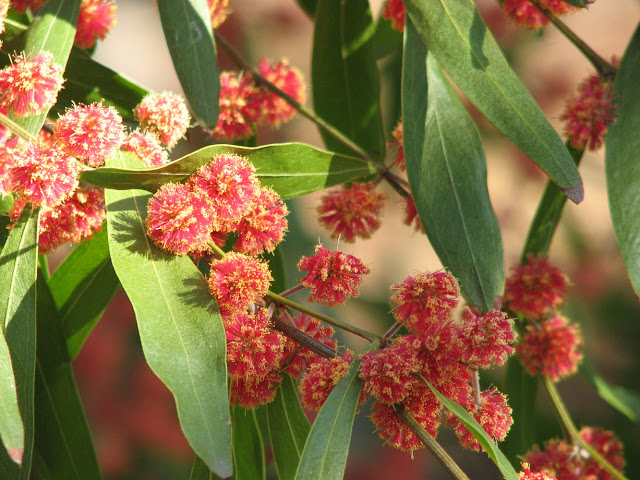 Most of the species flower during the end of winter or the beginning of spring. The most common Acacia, the Golden Wattle (Arcacias pycnantha) is found in the South Eastern parts of Australia, and the hotter and drier climates.