with ecologist Sue Stevens.
Gardens aren’t complete without our wildlife visitors popping in for a snack or a drink. Sometimes we just like the look of them, or it’s their musical song that has us hooked. Yet, there you are toiling away in the garden and all you’re getting is the Common Minor or Indian Myna birds that shoo all the more desirable birds away.If that’s the case, you need to rethink your planting, and here’s some tips…

Podcast Powered By Podbean
If you have nice wildlife visitors in your garden, drop the RWG team a line about who they are and what in your garden they’re attracted to? Or, send in a photo, because we’d love to hear from you. realworldgardener@gmail.com or write in to 2RRR po Box 644 Gladesville NSW 1675


Podcast Powered By Podbean
You look out your kitchen window and you see swathes of green as far as the eye can see. Does that sound like your garden?
Perhaps you could inject a bit of colour that says wow, that’s just gorgeous! In fact plum gorgeous all year round.
We're focussing on the burgundy coloured Loropetalum.

There is L. chinense var Rubrum and L. chinense var Burgundy.
Both have deep burgundy oval shaped leaves all year round and it’s hard to pick the difference between the two.
Flowers are a hot pink, fringy affair that look like a sort of like a fuchsia flower  and scientifically they’re described as this:each flower has four strip-like twisted oblong petals, in umbellate clusters of 6 to 9 flowers in the upper leaf axils. Flowering from late winter to mid Spring.
Make a great fuchsia alternative to cool temperate districts that can’t grow Fuchsias.
Grow to 2­½ metres, are very hardy, and can be pruned any way you like.
They like most soil as well as dry soil and are terrifically heat tolerant once established.
They will grow in all parts of Australia including those that receive light frosts.
Not overly fond of clay soils so add in a wheelbarrow load of humus or home made compost to the garden bed before planting.
Grows in full sun or part shade, but will colour better in full sun, giving a rich, deep burgundy leaf that makes a perfect foil in the garden.
I have dry sandy soil, that is extremely well drained and have no problem at all. I rarely give the hedge any additional watering during dry weather.
Loropetalums have a loose form and look best when pruned or as a tall plant at the back of the border.
NEW L. chinense Plum Gorgeous. 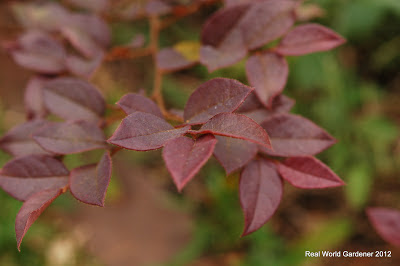 Great for adding colour and depth to the garden. The deep plum coloured foliage is maintained right throughout the year providing an extended season of interest.'Plum Plum Gorgeous has a compact form, graceful habit and maintains its naturally dense shape.
In spring, and again in autumn, you will be rewarded with bright magenta tassled flowers.
Tip prune young plants to promote a bushy habit. Prune as a hedge if you like.

Fertiliser requirements: any general purpose organic fertiliser will do after flowering right through to the end of summer. Follow the manufacturer’s directions of course.
They aren’t overly fussed about being fertilised that much once mature.
Easy to grow and requires minimal maintenance. No major insect problems.
Propagate from semi-hardwood cuttings in Autumn, but don’t have a very good strike rate.

Posted by Real World Gardener at 20:00