Dream Time in the Garden

Don’t flog out logs, the conversation slogan to save the habitat of the Bush Stone curlew.
Bush Stone-curlews are birds whose colouring makes them hard to see in bushland, especially in the dusky shadows and evenings, when they are most active.
Then there’s that call…really eerie…
Let’s find out more..with ecologist Sue Stevens. 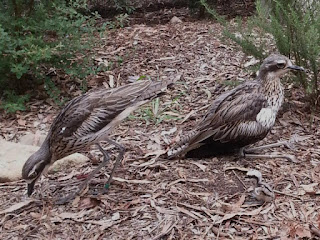 Bush Stone-curlews are birds standing 50–60 centimetres high, with long gangly legs, large yellow eyes, and grey-streaked upper parts. The Bush Stone curlew’s range has declined drastically in southeastern Australia. It’s now extinct in many former spots south of the Great Dividing Range. While its Victorian and New South Wales stronghold is along the border region.
It’s only sparsely distributed and continues to decline. http://www.environment.gov.au/biodiversity/threatened/publications/pubs/tsd05bush-stone-curlew.pdf
If you spot one in your district send us a photo, we’d love to see it. Either via email or post, but more importantly, leave those fallen branches or logs lying around so this bird can nest near.

We’d love to see photos of any small birds you have visiting your garden just send it in to. realworldgardener@gmail.com or write in to 2RRR P.O. Box 644 Gladesville NSW 1675 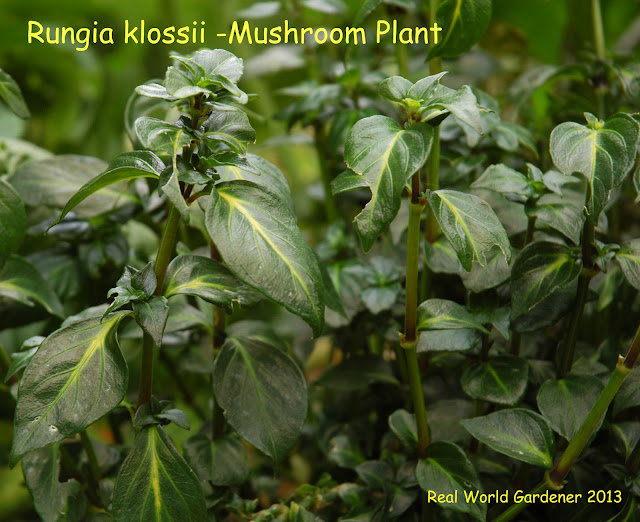 Have you ever heard of a mushroom plant?I bet you’ve never heard of a it?
Rungia klossii  or Mushroom plant is from the Acanthaceae family, that has quite a lot of ornamental plants with names like, Acanthus mollis or Oyster plant, Justicia sp, you might’ve heard of the shrimp plant, or even grow it yourself.
Why are these plants in the same family? For one thing, these plants have sympetalous corollas-that means the petals are fused into a tube and  they also have four stamens (sometimes reduced further to two).
Members of this family that grow in Australia or New Guinea (Australia was part of New Guinea in Gondwana time.) are usually small herbs or shrubs.They usually have quite dark green leaves.
Where do you get it?
Well local markets are a good thing, and it’s at one of these market plant stalls that I found such a plant. At first I didn’t really believe the stall holder so she made me try a leaf. It wasn’t until I was chewing on the second leaf that the real mushroom flavour came through.
You can also buy it now from online shops, or ring them and they’ll send you a catalogue, or your local garden centre might even carry it.
The mushroom plant is a perennial-that means it flowers and sets seed over a number of years, growing to about 60cm high.
It originates from the highlands of Papua New Guinea, so it’s a tropical plant or sub-tropical plant, but seems to grow alright in cooler areas that only get a light frost.
Don’t despair, if you want to try this plant, I’ve been growing mine for years in a pot, and even though there’s not that much frost where I live, it seems to survive quite well.
In cooler areas, the plant will die down in winter but comes back up in spring.
Mushroom plants have dark green, glossy succulent leaves and stems with a yellow central mid-vein.
The leaf is crinkly, about 2 cm long with a sharp point.
The leaves are arranged on a stem in opposite pairs at right angles to those above and below, this is what’s known as decussate.
In fact you if you bite on the leaf, it’s quite crunchy, and very tasty.
Mine has never flowered but it’s supposed to have blue flowers in spring.
It probably flowers in more tropical areas.
The flowering doesn’t matter really because you’re growing it for the leaves to put into your cooking, sandwiches and salads.
There isn’t much information about growing this plant in books or on the web, but I’ve found that it grows well in ordinary potting mix, and I’ve also put a plant in the edge of my veggie bed.
I have heard that it doesn’t like being waterlogged so for those people who have clay soils, you need to grow it in a raised bed or pot of any size.
You could say it copes in most soils, but it must be well-drained and kept fairly moist.
Mushroom plants can be grown in a position that gets morning sun or semi-shade.
If your district experiences temperatures in the mid-30’s for stretches at a time, I would say that you should only try this plant in a semi-shaded spot.
In cool temperate climates you could grow the mushroom plant in a full sun position.
This year I hedged my bets, I put one in the veggie bed in full sun, although it’s next to a taller Angelica plant and I kept another one in a pot in semi-shade.
The full sun plant is more bushy but shorter  than the potted plant.
This plant certainly won’t cope with any frost in winter. So if you want to grow it in, grow it in a pot and move it to a sunny spot when it gets really cold or under the verandah or patio.
Picking the leaves often means the plant gets more bushy-a bit like pruning most plants, the new growth that comes after is better.
In colder climates it becomes dormant in winter, may even die right down, but in tropical and sub-tropical areas it doesn't always lose its leaves.
The plant will grow from cuttings or from root division.
Spring is the best time, and it can be slow to strike.
Although once you get it going it can grow quite quickly.
If you plant it in the ground it’ll spread by suckering and will form a large clump over time.
It reminds me a little and in a good way, of Tradescantia, a weed that used to be called Wandering Jew, but that's not PC anymore.
You can eat the leaves in salads, they have a nice crunch to them, or chop them up and put them into scrambled eggs. They won’t go that grey colour.
Add them to soups, stews and stir-fries towards the end of cooking time. Heat enhances that mushroom flavour.
Why is it good for you?
The leaves are extremely rich in chlorophyll, making them, valuable for blood cleansing and building. Mushroom plant leaves have 3% protein (higher in protein than mushrooms).
What I don’t get is that have a few calories, in fact they have 33 calories per 100 grams of leaves.
But the good part is calcium content is the highest in any plant!
Other plant foods with high sources of calcium are: kale,  almonds, parsley, spinach
The plant is also a rich source of vitamin C, beta-carotene, iron and other vitamins and minerals.
It’s a very tasty herb and there should be more of it around.
The mushroom taste gets stronger with cooking.
Go to your local markets, larger nursery or garden centre and buy one today. 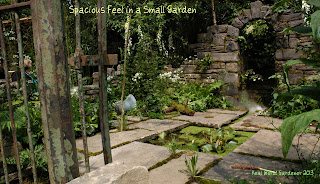 Over the coming weeks, landscape Designer, Louise McDaid will be giving you expert solutions to some of the most common problems that home-owners are faced with. Are you thinking my garden doesn’t need anything done to it ? Or I just maintain my garden and it doesn’t really need anything else. So I’ll ask you what if you heard something that might make your garden that more special? What if you heard something that might make you use your garden more than just toiling away to keep it neat and tidy?
Louise has some really great design tips that might hold the key to changing how you see your garden and inspire to create your special garden of eden.
Let’s start with today’s garden design problem…


Podcast Powered By Podbean
Perhaps next time you buy some plants, choose them to see how colours that recede and don’t recede work.
Plant out a bed of annuals in a pale colour then add some strong coloured taller plants in the background. Stand back and see what happens.Doesn’t that sound exciting? Why not try it out? There’s a lot of information in that design element so you may need to listen to it again a few times!!

Echinacea purpurea and cultivars.
Did you know that Purple coneflowers are the main ingredient used in herbal teas that help the immune system?
Today there are more than 200 medicines derived from Echinacea purpurea extract.
Echinacea is derived from Greek echino meaning hedgehog.
Echinacea purpurea, also known as the “purple coneflower” is a hardy, drought resistant plant originally from eastern and central North America, where it is found growing in moist to dry prairies and open wooded areas..
Echinacea’s are easy to grow, with a mid-sized leaf and about 70cm tall. Purple Coneflowers have large daisy-like, purple flowers and prominent browny-orange cones in the centre that are hard to the touch.
The flowers in the Asteraceae of daisy family is realyy an inflorescence or flower head; a densely packed cluster of many small, individual flowers, usually called florets.
The outer petals are called'ray florets' surrounding central 'disc florets.'  These florets make up the whole flower.
The flowers are long lasting are also attractive to butterflies.
Coneflowers will tolerate some shade but really do best in full sun.
Cone flowers need a well-drained soil is an absolute must.
Echinacea plants will fail almost immediately if planted in wet clay soil so if that's your soil type, grow them in pots or raised beds only.
Apart from heavy wet clay, they're not too fussy with soil type.
Growing from seed is pretty easy too as long as the seed is fresh.-ie not past its use by date.
Don't overwater your cone-flowers or they'll get root rot.
Coneflowers are very drought tolerant but they will need some help with water after being transplanted.
Water newly planted coneflowers just enough to keep the soil moist for at least two weeks after you plant them.
Keep an eye on through out the first year and water during extended dry spells.
After the first year they should have developed a strong enough root system to make it on their own.
The purple flowered varieties are a receding colour whereas the white makes the flower appear closer. Try growing both varieties in different parts of the garden for effect.
New coneflowers for free?
Devision is the easiest and by far the best way to get new plants of coneflowers.
If you live in the cool temperate districts where your growing season is short and winters are cold you should divide coneflower plants in late summer or spring. If you live in a warmer climate division should be done in autumn.
New and old colours and varieties
Purpurea - rosy purple flowers.
Purpure alba-white flowers
Bright Star - rosy to lavender pink flower.
Magnus - dark carmine flower.
Ruby Star - deep magenta-red flowers.
All cone flowers are frost hardy and prefer full sun
Tip:Remove spent flowers -you'll get more flowers that way.
Prune foliage hard each winter. When new growth appears in spring fertilise.

Posted by Real World Gardener at 13:20