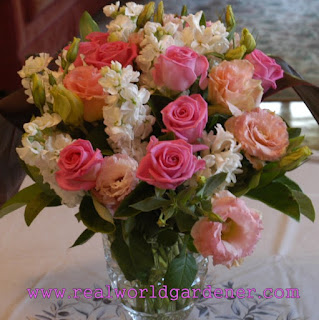 Who doesn’t love receiving a bunch of roses?
It certainly puts a smile on your face especially if they’re the fragrant type.
Perhaps we don’t receive them as much as we would like and if that’s the case, you need to grow some roses of your own.
Pruning can seem complicated if you read blogs on the web or books on roses and their care.
If you’re not that familiar with looking after roses, this next segment has simplified some of the things you have to do to roses in winter in order to have plenty of flowers.

The more you know about your rose the easier the task will be.
For example:
Is your rose once-flowering or remontant (repeat flowering)?
What is its normal growth habit - climber, tall, medium or short bush? 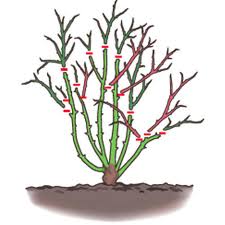 Do you get frosts in your area? This is very important for the timing of pruning.
Of course the later you leave the pruning, the easier it’ll be to find a bud as they begin to swell. 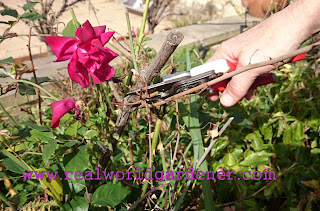 The first thing to do of course is to prune of dead and diseased wood. 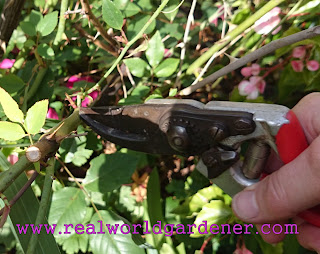 Pruning cuts are always 1-2 cm above these buds.

Just a few major steps first for beginners.
Prune two-thirds of the bush if it's a vigorous hybrid tea, (most commonly grown) otherwise if it's weaker growing than just half to a third.
Floribundas or shrub roses aren't pruned as heavily, but the same principle applies.
Climbers are different, don't prune those long whippy stems but tie them to a support and prune the stems that come off this main branch to about 2-3 buds.

If you have any questions about winter rose care or roses in general, why not email realworldgardener@gmail.com or write in to 2RRR P.O. Box 644 Gladesville NSW 1675. 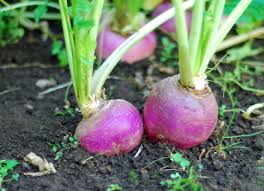 It’s funny that some vegetables have received a bad rap through no real reason other than not looking all that appealing.
One thinks of Turnips as some bland vegetable that’s used to flavour soups and stews.
But you wouldn’t eat it as a stand alone veggie would you?
Swedes, Parsnips maybe, but not the regular or even mini turnip.
I can’t say exactly why that is because I’ve been enjoying eating mini turnips for the last few weeks. Delicious!
Perhaps it’s the name-Turnip, just like Kohlrabi, the name and sight of the actual thing isn’t that appealing until you actually taste it.
Then you’ll be thinking, why didn’t I try this before because it tastes so good?
Did you know that the Romans used to throw turnips at unpopular people?
Maybe that’s why turnips got such a bad reputation?
But back the UK in the early 1700’s a bloke called Charles Townsend made turnips popular in England.
He did this by discovering that animals could be fed and fattened by eating turnips because they grew in cold and damp climates.
That meant that farmers were able to keep their livestock instead of having to kill them all for winter because there was nothing to feed them on.
You’ll be glad to know that the large woody turnips of old have mainly been replaced with smaller mainly white varieties that are delicious grated raw into a salad or as a side dish, leaving the swedes to take over in the stew department!
Why are Turnips Good to Grow Again?
Turnips are a very versatile vegetable - they can be harvested when mature or when they’re still quite small, cooked or eaten raw and the young tops can be used like spring greens.
Not only that, they’re quick to mature and easy to grow. 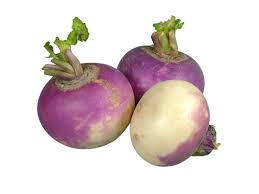 What does the Turnip look like?
Just in case you’re mixing up turnips and Swedes and Parsnips, the turnip is round, sits in the ground with just the top exposed to the light as it grows, and is actually the swelling at the base of the stem of the plant.
The Turnips that I’m going to talk about have mainly a white flesh and skin with a rosette of green feathery leaves that can also be eaten.
How do they grow?
Turnips can grow in full sun and partial shade, but like a well-drained soil.
Whatever you do when you plant turnips, don’t let them dry out.
When to plant your turnips?
Well I’m afraid it’s a bit of a mixed bag around Australia, so here goes.
From September until May in temperate districts and also cool temperate districts.
From August until May in sub-tropical areas.
For arid areas, you’ll have to wait until February then you have until August and Tropical areas, have even less of a chance, only between April and June.
Before you sow your turnip seeds, give the veggie bed some chook poo-about a handful per square metre.
Sow the turnip seeds no more than 1 cm deep.
It’ll be a bit tricky to get the right distance apart so keep thinning them out until they’re about 15cm apart.
If you thin them before 8 weeks, both the root and leaves are good to eat at this stage.
The leafy tops of these early pickings are great in salads.
Even though you’re getting an early start on your turnips, if you have some unseasonal warm weather, look after them by not letting them dry out, otherwise they’ll be small and woody.
Mulching with sugar cane, pea straw or something like that will help with keeping the soil moist.
Turnips take about 2-3 months to grow, so add a handful of chicken manure every 4 weeks.
You can pull them out when they’re the size of a golf ball when they’re at their sweetest, or wait until they’re the size of a tennis ball.
There are quite a few new varieties out there so why not try 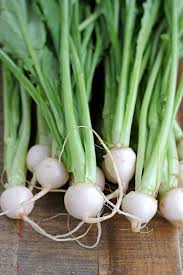 Turnip White Mini-Tender round white roots, stores well. Crisp, beautiful well shaped rounds, ideal for the turnip lover. Harvest in only 7 weeks.
Turnip ‘Snowball’ is a very popular first-class, globe variety with solid white flesh and a juicy, sweet, mild flavour. Snowball’s an heirloom turnip that was introduced before 1885.
Snowball is best harvested when no larger than a tennis ball and can also be enjoyed when much smaller. Snowball takes between 5-8 weeks to be ready.
Turnip 'Golden Globe'  Also known locally as 'Butter Turnips' locally. Were introduced before 1888, this a heritage turnip with a beautiful golden skin, amber yellow flesh and delicate flavour. Stores well.
Why are the good for you?
Turnip roots are high in dietary fibre, vitamin C and B6, folate, calcium, potassium, and copper.
The greens are an excellent source of vitamins A and C, as well as a good source of calcium, iron, and riboflavin
AND THAT WAS YOUR VEGETABLE HERO SEGMENT FOR TODAY! 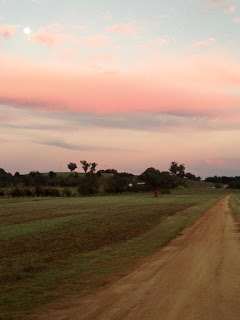 Over the last few weeks a series about designing a garden on a rural property a couple of hours south of Sydney has been the topic.
We talked about where to locate the garden, should it be where the bones of the old garden was, should it be somewhere else but not where farm machinery needed to trek through it?
Then was soil needing to be improved? Of course it was.
Now comes the most exciting part of the process.
What plants what materials are going in, not to mention how many?
Let’s find out ….
PLAY: Re-working  A Garden part 4_5th August_2015
Some of the plantings are outlined below.
Shade was needed for the back of the house from the western sun but at the same time the trees couldn't be too large so that they would block the views.

The back section of the garden included an avenue of Manchurian Pear trees. 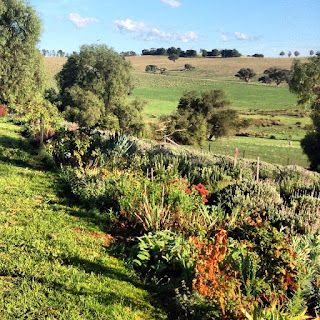 Not everything is transcribed from the segment, so if you’re looking for something in particular, email or write to me and I can give you more details. realworldgardener@gmail.com

Talking with Karen Smith from www.hortjournal and Jeremy Critchley www.thegreengallery.com.au
Australia has a diverse range of plants that many wouldn’t recognise as being native other than the usual suspects of Eucalypts, Grevilleas, Bottlebrushes and Banksias. 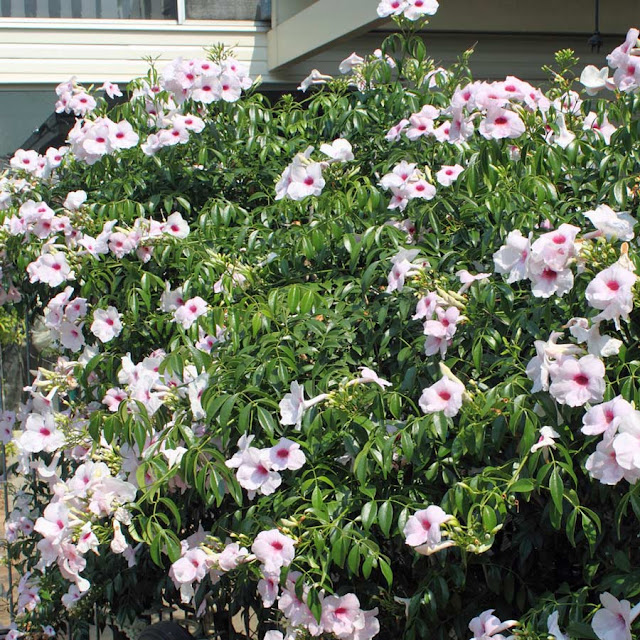 In steps a climbing vine that is so lush you’d think it came from the rainforests of Madagascar or Sumatra.
Pandorea jasminoides or Bower of Beauty or Bower Vine.
But it turns out to be truly a native plant with dark green glossy leaves and lightly scented flowers that measure around 5cm across.
What is this plant? Let’s find out …


Even though Bower vine comes from tropical and sub-tropical rainforests, it’ll grow well in southern states if you give it plenty of moisture and protect it from frosts when it’s a young plant.
The newer varieties are Jazzy Bellz-white with deep maroon throats, Ritzy Bellz-pure white petals and throat, Sassy Bellz-medium pink with crimson throat and Flirty Bellz-soft pink with ruffled edges and a dark pink throat.
Same as the original but the distance between the internodes is shorter so appears even more lush, if that was possible.
Large white trumpet flowers with golden centres and is often seen growing all over Australia.
It can be easily trained over fences and trellises forming a dense screen.
I also have a white one with a yellow “throat.”
So, what’s the difference.
Well the original climb to 3 metres high and 5 metres wide. That’s big. I have it climbing over a large arch but it’s not that wide so a trim during the growing season with hedge clippers is need a couple of times.
﻿ Why grow one at all? Bird attracting- Suitable for hedge- - Fast growing
So attractive, I had a birds nest in it for the last two years.
Flowers mainly in Spring and Summer, then you get the long seed pods filled with winged seeds that germinate easily given the right conditions.
I’ve given away quite a few plants that have been grown from seed.
Well there are more varieties out now under the hybrid name “Auzzie Bellz”…with an unusual spelling.
The varieties Jazzyy Bells masses of clean white flowers with ruffled edges and a deep crimson and Sassy Bellz-a darker pink with a crimson throat.
Both only grow to 40 cm
That makes them suitable for pots being more compact, growing to only 40 cm
Use on trellis and pots or on a frame.
There’s also two more varieties that grow as big as the original Pandorea jasminoides but with a deep red flower called Ruby Bellz and a yellow flower with a whi

Posted by Real World Gardener at 18:40