Lalage Leucomela Among the Bells of Ireland and Rock Samphire

Not tra la la but trill trill trill in the Wildlife in Focus segment: a most unusual fennel in Vegetable Heroes plus the series old fashioned plants continues in Design Elements, today it’s warm temperate coastal and Bells of Ireland in Talking flowers.

Today it’s a pretty looking bird that is Australian but with a French sounding scientific name.
Varied Triller's have a wide-ranging diet, about anything from fruits, to nectar, and insects.
Don’t be alarmed though, they go for the fruits of native figs and not your fruit trees in you backyard or orchard.
Let’s find out more.

The varied triller is a small to medium, about the size of a noisy miner and weigh around 35grams.

The male is black on top, with white eyebrows and grey barring on the chest. The Females are similar to the males, but with a little bit more brown in their feathers.

Their call is a softish churring sound. Rather pleasant to listen to.
The Varied Triller builds a beautiful cup shaped nest held together with spider’s web and placed in the fork of a tree.
Sorry Tassie and Victoria, you miss out, but maybe when you’re travelling to other parts of Australia, you can listen out for them.

If you have any questions either for me or for Holly, drop us a line to realworldgardener@gmail.com or write in to 2RRR PO Box 644 Gladesville NSW 1675

Sea Fennel: Crithmum maritimum
It was Shakespeare, in the Tragedy of King Lear. London. (Act IV, scene VI,) who referred to the collecting of this herb “Half-way down, Hangs one that gathers samphire; dreadful trade!" Meaning that people often lost their lives trying to collect Rock Samphire halfway down cliff faces.

Being a rare herb I was originally not going to mention this however, of late, these herbs are making a resurgence in various retail outlets, from seed, to dried herbs and pickles.
In fact an Australia seed company on the Mornington peninsula in Victoria does sell seeds of Sea Fennel, although they call it Rock Samphire in their catalogue. www.diggers.com.au
What's In A Name?
Where It Grows in The Wild

Sea Fennel is still common round the coasts of Southern Europe and South and South-West England, Wales and Southern Ireland, but less common in the North and rare in Scotland.
How to Eat It? 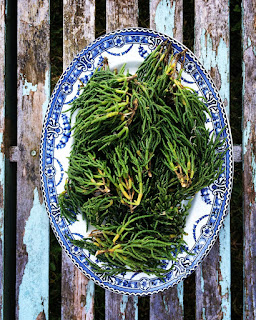 Sea Fennel or Rock Samphire has been used in different ways for centuries, from the time of Greeks and Romans, as a food - raw, steamed, boiled or pickled, but it was also used as an medicament due to it's therapeutics and aromatic contents. Even today it is widely used in modern cosmetics perfumery and medicine.
Where It Grows
What It looks like

Rock Samphire is a muted blue or pale aqua- green edible plant which also grows on tidal marshes.
Rock Samphire or Sea Fennel is a succulent, smooth or glabrous, multi-branched herb, and woody at the base, naturally growing on rocks on the sea-shore and wettened by the salt spray.
You can assume that it likes to grow on sea cliffs, rocks, or sandy well drained soil.
You could say that stems of Sea Fennel are long, fleshy, -green, shining leaflets (being a succulent they’re full of aromatic juice) and lots of clusters or umbels of tiny, yellowish-green flowers, although the flowers aren’t a real feature.
Being a succulent, if you have success with growing Aloe vera, than good, Rock Samphire likes the same growing conditions.

Plants of Rock Samphire, will last you for many years in a pot or in the ground.
Grow it in full sun in a warm sheltered position.
When you buy the seeds of Rock Samphire and grow it, you can divide in up into more plants next spring or save the seed and grow more plants that way, to share amongst your friends or gardening group. 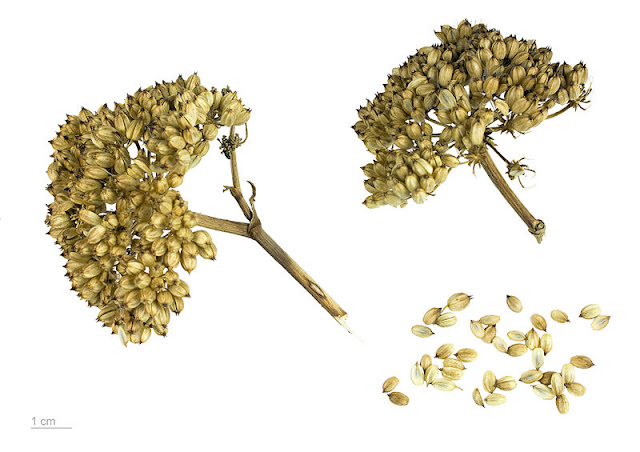 In the 19th century, samphire was being shipped in casks of seawater from the Isle of Wight to market in London at the end of May each year.
Sea Fennel or Rock samphire used to be cried in London streets as "Crest Marine".

Where do you get it? The Royal Botanic gardens nursery have started propagating this plant-where I got mine from. You can also buy it online and I’ll put on link to that nursery on my website. www.diggerseeds.com.au

By the way, you can also buy it on that auction site ebay in Australia and they promise to express ship the plant to you. 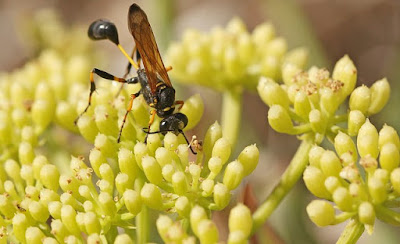 Why is it good for you?
It has soothing and anti-inflammatory properties.

Pickled Sea Fennel (Rock Samphire, Motar...)
Pick the young and green rock samphire beginning of March (in Australia) before it flowers. Break into 2 in. lengths, lay on a dish and sprinkle with dry salt. Leave for 24 hours. Drain, then cook gently until tender in enough vinegar to just cover it, but don't allow it to get soft. :
Plain vinegar is best for this as the samphire has its own spicy flavour.
Seal down securely in hot jars
Hand pick sea Fennel before it flowers. Pick of the small leaves and use them in a salad.
Wash the stems.
Cook it in mixture of water and vinegar (70:30) for 15 min until tender.
Leave it to cool and store it in jars filled with diluted vinegar (half water, half vinegar).
You can use it for seasoning salads, or as a cold relish to round meat or fish dish!
Experiment with it and you will discover wonderful ways to enjoy this extraordinary plant!
THAT WAS YOUR VEGETABLE HERO FOR TODAY

DESIGN ELEMENTS
Old Fashioned Shrubs: Warm Temperate Coastal and Inland Mediterranean zones.
This includes Adelaide, even Melbourne, and Alice Springs with temps in the 40’s in the Summer and rain in the winter.
What is on offer for the hot dry sub-tropics. Let’s find out.
I'm talking with Peter Nixon, garden Designer & project Manager from Paradisus Garden design.

Temperate coastal and inland mediterranean are zones that would suit many a location around
Australia as long
Peter mentioned these plants
Shrubs and small trees:

Perennials & sub-shrubs: that are easy in that climate

Bells of Ireland: Molucella laevis:
Native to Syria and Turkey and not as Carol Linnaeus thought, native to the Molucca Islands of Indonesia. 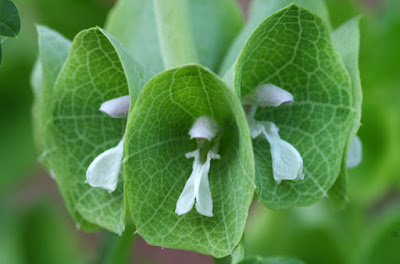 Not actually a flower, but instead are amplified calyxes that grow into a flowering plant. Calyxes (or bells) are leaves or sepals that develop into a protective house for the quite small and slightly fragrant, white or pink flowers.
The prominent part is actually the calyx.
Best grown in light sandy soil, the molucella plant also requires a good, openly sunny spot. Flower right through spring, summer and into autumn, Bells of Ireland offer interest.
Can grow to 1 metre tall.

How to cold stratify

You can expose them to cold by sowing them outdoors in the Autumn, or by refrigerating them for a week before starting them indoors.
I'm talking with floral therapist, Mercedes Sarmini, of www.floralgossip.com.au

This video was recorded live during the broadcast of Real World Gardener radio show on 2RRR 88.5 fm in Sydney.