Why Trees Fail and Celery

When a large, mature falls in your garden, it can be very disheartening, especially if it’s a special or favourite tree.
You may be left wondering what happened to cause it to fail after 20 or 30 years.
Sometimes it’s obvious why a tree may fall in your garden, but what are the underlying factors?
I'm talking with Glenice Buck, consulting arborist and landscape designer. 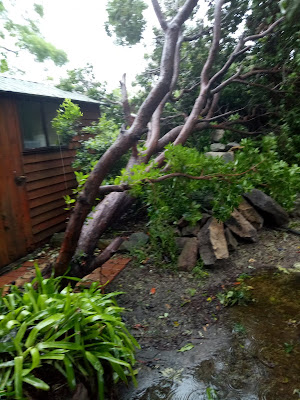 There are many reasons why trees fail or fall.

Trees will also fail or fall over in extreme weather events if they're susceptible.
Heavy rain inundation together with strong winds undermine the soil that the tree is growing in, particularly if the soil is shallow.
Glenice talks about the force of the wind, where the canopy of the tree acts like a lever, causing it to topple.
Sometimes the tree can be rescued by giving it a hard prune and winching it up, but that is the exception rather than the rule.

If you want to know more or if you have any questions about why trees, fail, next week’s episode is about assessing trees for failure with Glenice.

If you have any questions of course, why not email realworldgardener@gmail.com or write in to 2RRR P.O. Box 644 Gladesville NSW 1675.


If you’ve ever let your celery self seed you would’ve noticed that the leaves become a bit feather and the flowers look like those of carrots.
History of Celery
Did you know that celery leaves and inflorescences or flowers were part of the garlands found in the tomb of pharaoh Tutankhamun (died 1323 BC),?
Another interesting bit of trivia is the romans used celery seed in pills for relieving pain (as described by Aulus Cornelius Celsus) around 30 AD.
The Greeks believed celery to be a holy plant and so it's not surprising they wore necklaces of it at their version of Olympic Games.
For the ancients there was not much difference between celery and parsley. In fact the name for parsley actually means rock-celery.
Celery has had that reputation of being a difficult crop to grow, mainly because traditional varieties need a lot of work and attention - they have to be planted in deep trenches and require layers of soil added regularly to blanch the green stems.
Otherwise the celery tastes too strong and bitter.
I know of one gardener who uses sheets of corrugated iron against his celery patch to blanch them.
Must love his celery!
When to Grow
In sub-tropical districts you can plant them from April until November, Tropical districts only from March until July.
In temperate zones-August until December.
For Arid areas-May until August.
Finally cool temperate districts-I’m afraid you’ll have to wait until September, then you’ll have until the end of December
What Celery likes:
Celery is a biennial plant (which means that they flower, fruit, then die in the second year) but are generally grown as an annual.
Soil preparation
Dig the soil (in the spring before planting), removing big stones, weeds and incorporating plenty of garden compost or well-rotted manure.
A week or so before planting, rake a general purpose organic fertiliser (90g per square metre) into the surface layer of the bed.
How to sow seeds


For perfect plants with lots of well-branched sticks, plant celery seedlings about 27cm  or a ruler width apart making sure that the crown of the plant is at ground level.
Plants will grow better if they're arranged in a grid pattern, rather than planted in long rows.
TIP: The secret to fresh crisp stalks is plenty of manure and water, don't let the soil dry out as it has shallow roots.
Keep celery well-watered and the area around them free from weeds.
Plants can be given a boost by feeding with a balanced liquid fertiliser about a month after planting.
Harvesting
Celery will be ready for picking in about 3 ½ to5 months, depending on the variety you grow.
When picking your celery just lift plants using a hand fork, taking care not to damage neighbouring plants.


TIP: For best flavour and longer storage, water celery plants the day before harvest.
Best Varieties
A variety called Celery Dorata D' Asti Apium graveolens var. Dulce is available from a one www.diggers.com.au and Stringless American that is normal to use unblanched.
I'll be getting my seeds from them rather than buying celery seedlings and having to try and blanch (unsuccessfully) then ending up with bitter tasting celery.
The Dorata  variety is easier to grow than other varieties, remaining crisp and juicy without the need for blanching. The lime-green stems can be snapped off from summer through to autumn and winter.
Although plants can be grown from seed sown in early spring, it's far easier to buy ready-grown seedlings, which can be planted out in August onwards, depending on what zone in Australia you live..
A third NSW seed company has Golden self Blanching variety, which by all accounts, tastes the best.
Why is it good for you?
On top of the above celery health benefits, celery is known to be a negative calories vegetable.
Which means that the body uses more energy to digest than absorb calories from it!
Add the fact that Celery's high water content and fibrous nature mean that it is great for those who like to snack without gaining weight
A medium stalk of celery contains around 10 calories, 2g of carbohydrates, 1g of protein, zero fats and cholesterol!
Celery leaves can also be eaten or used in soups or used to make celery
AND THAT WAS OUR VEGETABLE HERO SEGMENT FOR TODAY
Posted by Real World Gardener at 16:37