Ollas Save Water in the Garden and Grow Green Tomatoes 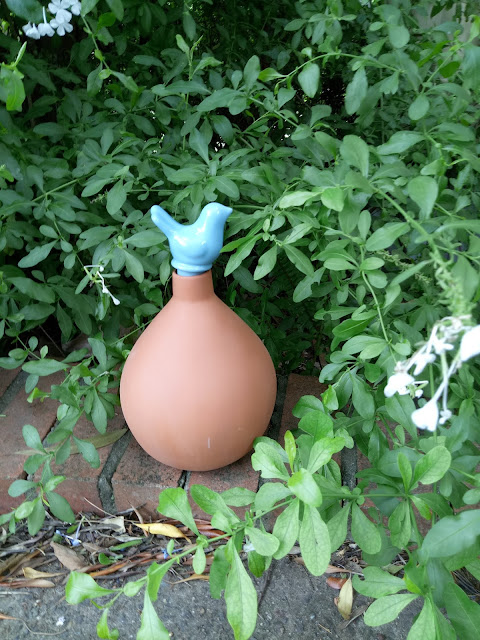 The whole idea is to make water last longer in your garden, whether it is from rain or using garden hoses.
Tip: Make sure your soil can absorb a lot water.
Check if it is water repellant (hydrophobic).
Add a lot of organic matter to improve the water holding capacity.
If you're using dripper hoses, cover them with mulch so the eater doesn't evaporate rapidly.
But did you know that ollas have been used to irrigate gardens for thousands of years?
You might be now thinking what are ollas exactly?
Let’s find out.
I’ve amtalking with Margaret Mossakowska sustainability educator at moss house of
www.mosshouse.com.au
Ollas reduce the amount of water lost to evaporation, especially in hot dry climates.
The tip is, ollas are buried in the soil before you do your planting.
When planning your garden, know that water leaving the olla is approximately equal to the radius of the olla.
If you have a particularly large garden, you will need a larger olla or several small ollas spaced evenly.
If you have questions or have information to share, drop us a line to realworldgardener@gmail.com or write to 2rrr PO Box 644 Gladesville NSW 1675

Green Tomatoes even when ripe
This segment won’t be complete without mentioning tomatoes at least once every year, because there’s always so much to be said about them.
In Australia, tomatoes are one of the most popular vegetables, with potatoes being no.1
A Bit of History
The tomato is native to South and Central America, and the first tomato was thought to bear a yellow fruit and grown by the Aztecs.

In the mid 20th century breeders discovered a tomato that ripened evenly.
So it was  then cross-bred  with just about every tomato variety, to produce attractive red fruit without the typical green ring surrounding the stem on uncross-bred varieties.
Before this hybridisation, tomatoes were able to produce more sugar during the process of ripening and were sweeter and tastier.
Usually, tomatoes turn red when ripe, but some varieties stay green.
These are the ones that we will concentrate on.

But how do you tell when green tomatoes are ripe?

The colour green will change from a very bright green to a greeny-yellow tinge. 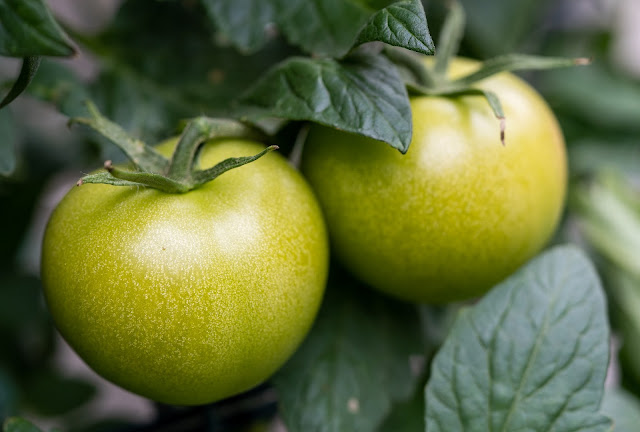 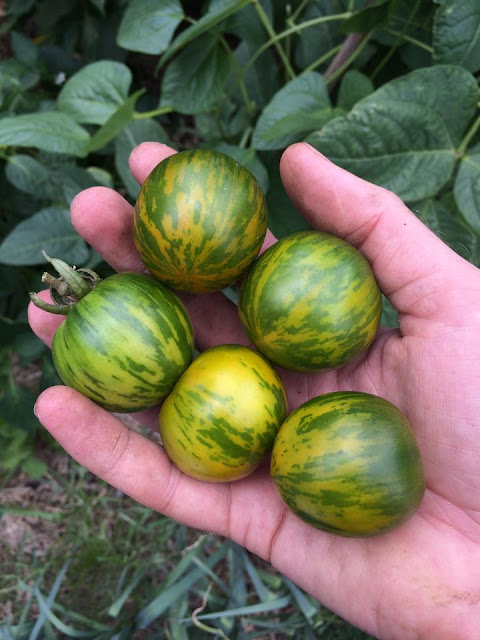 Some varieties for you to try are Green Zebra. Here's a photo of these being held by my friend Steve.
Green Zebra produces lots of tomatoes, about 5 cm’s round that ripen to a beautiful amber gold with dark green zebra-like stripes over the amber background.
Inside, the flesh is a beautiful, sparkling green.
When those stripes appear, then you know the tomato is ripe.
Aunty Ruby’s Green, is a luscious green big  sweet beefsteak type.
Great for slicing.
A gorgeous green-when-ripe colour, and is said to be the very best tasting green.
For the novice gardener this one you might need to tell by feel if it’s ripe though. 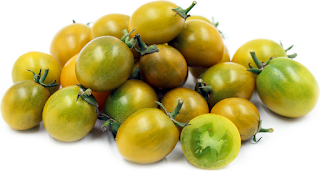 Another favourite is Green Grape.
This one has an olive green skin, but is very sweet with a hint of lemon zest.
It even won the tomato taste test at the Botanic Gardens in Sydney. A very compact plant ready to eat fruit in 10 – 12 weeks.
When to Grow Tomatoes?
There’s a tomato for every type of climatic condition and generally they’re a warm season fruit even though we call them vegetables.
In temperate climates you can plant them until December, hopefully some of you started them in early September to get the jump on fruit flies.
In sub-tropical and tropical areas, this week it’s your turn to win, and yes, you can plant tomatoes all year round.
In cool temperate districts you have from October until December, and in Arid areas from August until March, so nearly all year.

TIP:When you plant your seedling, this is about the only plant I know that you pile the soil higher than it was in the pot-that way, it grows extra roots to support the plant. 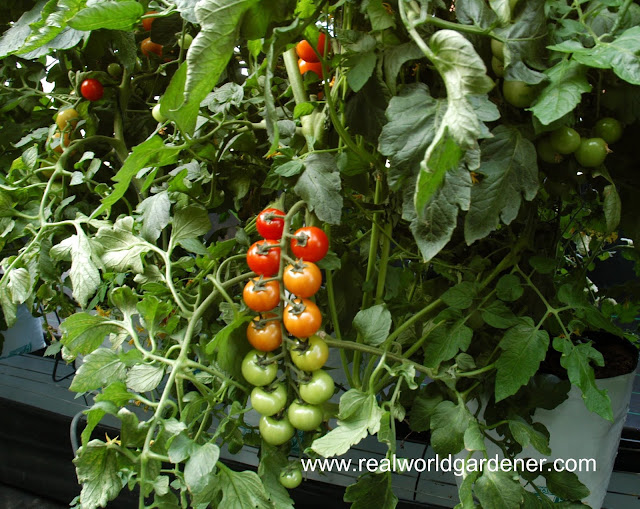 ANOTHER  good tip is to put some hydrated or fluffed up water crystals in the bottom of the planting hole, especially if in your district it’s very hot during the day, that it’s sometimes hard to keep the water up to them.
They actually need lots of water to prevent this problem (“blossom end” rot), when they get a black bottom. Which also means a lack of Calcium. 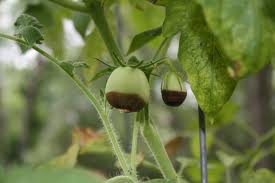 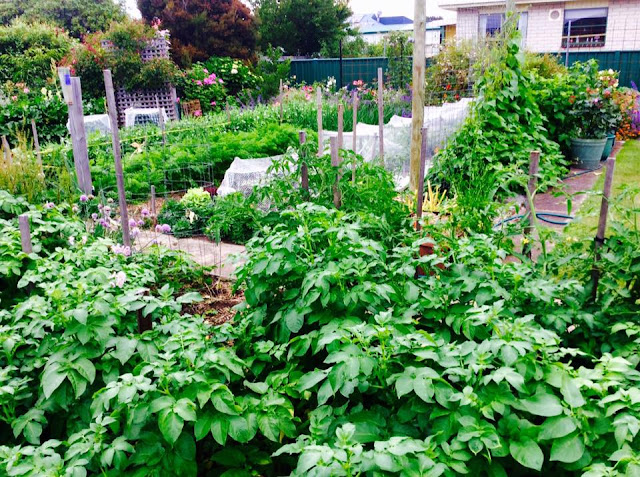 HINT: tomato plants will only set fruit if the temperatures don’t drop below 210C.
VERY IMPORTANT:
Prune off the lower leaves to allow more light, improve air-circulation and prevent the build-up of diseases.
For some listeners, fruit fly will be a problem.
There are lures and preventative organic sprays that contain Spinosad.
I intend to trail fruit fly exclusion bags. As soon as the fruits appear, on they go.
WHY ARE THEY GOOD FOR YOU?
First the good news, there have been studies done which show that eating tomatoes lowers the risk of some cancers. Possibly because of the chemical lycopene that is found in tomatoes and makes them red.
Cooked tomatoes are even better because the cell walls get broken down releasing something called carotinoids. Eating tomatoes with a small amount of fat, like some olive oil in a salad, allows the lycopene part to absorb better.
Tomatoes are highly nutritious and sweet because of natural sugars – sucrose and fructose.
If you ate only one tomato a day, you would get 40% of you daily requirements of Vitamin C and 20% of Vitamin A.
Now the bad news….there is anecdotal evidence that something called glykoalkaloids contribute to arthritis symptoms.
THAT WAS YOUR VEGETABLE HERO FOR TODAY

Posted by Real World Gardener at 13:01