All Things Green and Beautiful

Growing produce in shady gardens.
Are you finding that as your trees and shrubs have matured, the garden has become more shady?
There’s a few things that you can do, one is to renovate your garden, either by calling in professionals to remove or judiciously prune some branches to let in more light, and the other to grow shade tolerant plants underneath.
But what about veggies? Don’t they need full sun? Let’s find out about growing produce in shady gardens. 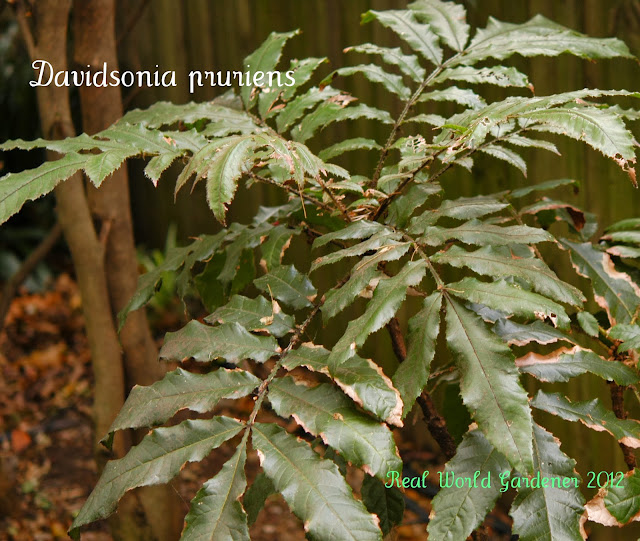 You don’t have to convert to permaculture to grow vegetables in the shade.
Anyone can do that. It’s just knowing what can tolerate shade and what doesn’t.
Borrowing a few principles from permaculture makes for a good gardener because you’re embracing new ways to do things.
If you're interested in permaculture workshops to find out more visit www.permaculturenorth.org.au
If you have any questions or tips about what grows in shady produce gardens drop us a line to realworldgardener@gmail.com or by post to 2RRR P.O. Box 644 Gladesville NSW 1675

ZUCCHINI or Cucurbita pepo.
Summer squashes, and winter squashes, are native to the Americas and belong to the cucurbitaceae family of melons and squashes.
In the culinary world, squash, including zucchini, are used as vegetables but did you know that botanically speaking, zucchini is the immature fruit, or swollen ovary of the female zucchini flower.
Archaeologists have traced their origins to Mexico, dating back from 7,000 to 5,500BCE, when they were included in most meals along with maize, beans, and squashes.
Zucchini is the more common name in Italy and probably where the name came from.
Zucca means squash in Italian and Zucchini, is little squash. 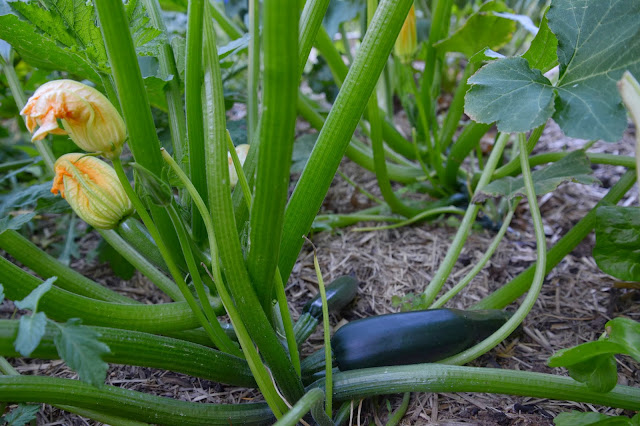 We call this veggie Zucchini as they do in North America, and Germany, while courgette is the name you’ll hear in the United Kingdom, Greece, New Zealand, Ireland, France, the Netherlands, Portugal and South Africa.
Zucchinis are sort of a shrub that is a bushy, non-vining plants with large, dark green, mature leaves that have silver-gray splotches and streaks.
The plants are monoecious, meaning they grow male and female flowers on the same plant. Zucchini grows outwards and spreads but doesn’t send out long runners like pumpkins.
Zucchini fruits can be dark or light green, grey green and a related hybrid, the golden zucchini is a deep yellow or orange colour. They are usually long, sort of cigar like and you eat the whole thing, skin and all.
When to Grow
In temperate areas, plant out zucchinis from September through to January.
Cool temperate areas, you have been October and January
Arid areas, yes that’s you in Alice Springs and Broken Hill, you have a bigger window, September through to March'
Sub-tropical, August to February, but for tropical areas, now’s too hot. Your Zucchini planting time is April to August. Very different from the rest of Australia!

.Having said all that Zucchinis are great for the beginner gardener because they are quick and easy to grow.

Come to think of it, the last few vegetable heroes are perfect for beginner gardeners-beans, sunflowers and Yacon. 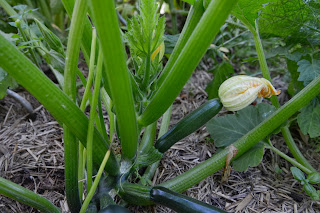 To grow your Zucchinis, prepare your soil with the usual digging in some compost or cow manure. Zucchinis are light feeders so won’t need much more than an occasional feed with some liquid fish fertiliser.
Sow your zucchini seed where you want them to grow.
Mound up the soil and then make a indent up to your first knuckle, or even 7 cm deep, and drop in 3 seeds.
When they shoot up pick the strongest one and discard the others. It will get too crowed otherwise.
TIP: Planting your seeds deeply will make your plant more drought tolerant.
Zucchinis can take up a lot of space so maybe try growing them vertically. That way there’s also improved air circulation so the fungal problems are a lot less.
You could grow them in pot that way. The pot would have to be about 30cm diameter.
The important thing with growing them vertically is have lots of soft ties, like old panty hose cut into strips, so you can tie up the stems as they grow. That way they won’t flop all over the place and probably break their stems.
How to Pollinate Zucchini Flowers.
If you don't get many bees or pollinating insects around your way you might need to pollinate the zucchini flowers yourself.
Get a cotton wool bud and take some pollen from the male flower. Male flowers tend to be on the end of a long narrow stalk.
Female flowers are a lot closer to the main stem and have a swelling behind the petals. Just like female flowers on pumpkins. 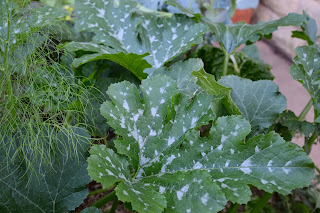 Look inside the female flower. There should be a golden formation. Dab the male pollen all over this female part. Hopefully in a few weeks that swelling behind the female flower will grow into a zucchini.
Fully grown zucchini leaves tend to look a motley silvery grey colour which looks like the fungal problem powdery mildew.
Don’t worry, this is the normal Zucchini leaf and unless you’re watering the leaves this shouldn’t happen.
Powdery mildew looks quite different and usually covers the whole leaf. This mildew grows on wet zucchini leaves or on any veggie leaves that are wet.
TIP:WATER THE ROOTS NOT THE LEAVES.
In summer you'll need to keep your zucchini's water levels high. They dehydrate very quickly on hot days so mulch them heavily (but remember to keep the mulch away from the main stem).
There are two main problems that gardeners have when growing zucchinis.
When the fruits are 5cm long, they rot and drop off. This is a pollination problem. You might have to pollinate them yourself. Next year grow a whole lot of flowers nearby like Borage, nasturtiums or marigolds.
The second problem sounds like blossom end rot where fruit almost ready to harvest starts rotting from the top.
If this happens you need to add lime to the soil at the time of planting.
Too late this season. Otherwise it can be caused by irregular watering, that means, too much drying out in between waterings.
If your plants have many days of no water and then a glut of it, blossom end rot can develop, ruining the fruit.
Zucchinis need to be regularly harvested, usually when they’re about 20cm long.
Picking them help the plant to keep on cropping. If you let Zucchinis grow too big-like a metre long, they’re not much good as a vegetable to eat because they become too tough and contain mostly seeds.
The flowers are also edible - they can be used in salads, as garnish, and even fried.
Why is it good  for you?
The zucchini vegetable is low in calories, about 15 calories per 100 g fresh zucchini.
1/2 cup of zucchini also contains 19% of the recommended daily amount of Manganese
As well as Zucchini containing large amounts of folate and potassium, the rind contains the nutrient beta-carotene, so to get the most out of your zucchini, you should also eat the rind.\
If you want some unusual varieties, go online to buy the seeds on Goldfinger Hybrid, (16cm) Costata Romanesco-speckled with light coloured ribbing.
www.newgipps.com.au-
Ring for the website or if you don’t have a computer or like shopping on line there’s also a free call number. 1800 887 732 Both of these I’ll put it on my WEBSITE
Storing Zucchini-Store zucchini fresh and unwashed in a cold dry place, like the fridge, for about 3-5 days.
After that they start to get soft and wrinkly, and nobody wants that. Makes you wonder about the zucchinis that you buy in supermarkets. How has their shelf life been increased? Better to grow you own. 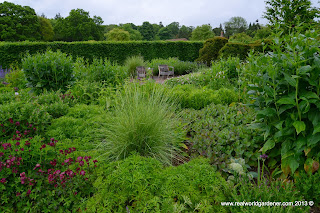 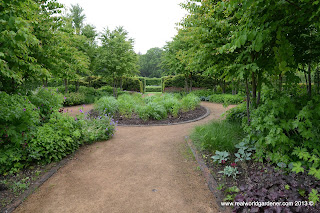 Christopher Owen is very passionate about using grasses in his designs because it’s not just the appearance that affects the overall design of a garden, but the texture and sounds that you can also create.
Something to think about.


Plant of the Week

For millions of years these types of Magnolias grew in gorges and valleys, outlasting many ice ages and the extinction of families of plants and animals.
The tree has evolved with what is now one of the most magnificent flowers you’ll ever see and a scent that is delicate yet powerful. So what is this plant”  , let’s find out…

The fragrance of the flowers outlast the cut flowers and can fill a room with delicious lemony scent. 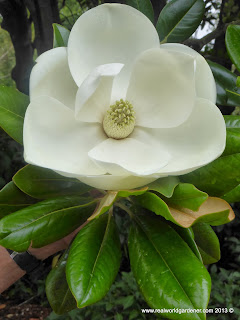 Interestingly the flowers of the Magnolia have no nectar but only pollen. Bees aren’t the primary pollinators but they certainly go there for a feast of pollen as well as the major pollinators-all kinds of beetles..

Evergreen Magnolias
Magnolia Grandiflora is the 'Evergreen Magnolia'
There are many forms of this Magnolia now and they vary in size from large specimen trees such as Bull Bay Magnolia, Magnolia Exmouth,  to types suited to screening such as the smaller growing Magnolia Teddy Bear.
Magnolia Grandiflora will grow up to 20m or more, an absolutely fantastic specimen tree in park or a very large garden.

We need to point out that the Michelia group of evergreens, like Michelia figo, the port wine magnolia and Michelia champaca , Himalayan cedar, in 2006 because of a cladistic analysis of the genus Michelia, they were moved to the genus Magnolia, with the name now being Magnolia figo and Magnolia champaca.
There’s too much to say about this group so we’re sticking to the large leaved original Magnolias and leave the others for another segment.
Magnolia grandiflora is native to southern USA where it grows is on edges of swamps and lakes on fairly rich soil.
No surprise that this magnolia's common name is Southern Magnolia or Bull Bay Magnolia.


The leaves are mainly oval shaped around,  and quite large, stiff and leathery to about 12–20 cm long and 6–12 cm wide, with smooth margins.
The underneath of the leaves is brown and felty, sometimes described as scurfy with yellow-brown pubescence.


The dinner plate sized, lemon-scented flowers are white, up to 30 cm across and, with 6–12 tepals with a waxy texture, growing from the tips of twigs on mature trees in December to January.
Flowering is followed by the red seeds

New cultivars including Magnolia Kay Parris and Magnolia Teddy Bear are now on the market and these have slightly different foliage and flower forms.


Magnolia 'Little gem' was the first of the so called 'dwarf' magnolias, however it will still grow to 10m.


Magnolia 'Little Gem' can be pruned back to a certain extent but sometimes the pruned branch dies back or only one shoot will result.
Some say that this makes it suited for maintaining as a tall hedge, but I disagree.
I think the large leaves on Magnolia Little Gem, make it look ungainly, untidy, and  awkward looking as a hedge.
But it might make a great as feature tree instead.


The cultivar 'Kay Parris' Magnolia has a very long flowering season, tolerates cold a little more than most magnolias.
The leaves are a nice green, extremely glossy, and a deep orange on the underside.


Marginally smaller growing than 'Little Gem' perhaps to only 6-9m, again it makes a nice specimen tree as it has good structure and holds its shape well,


Again, I don’t like big leaved plants as a hedge, but some say that 'Kay Parris' Magnolia could also be a screening plant and it's faster growing tree than 'Little Gem' 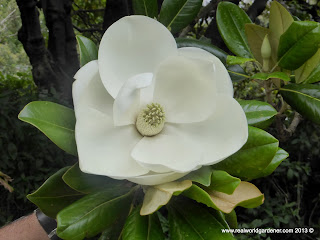 Magnolia 'Teddy Bear' is smaller growing than even 'Kay Paris'.
Teddy Bear Magnolia is different to others in that the dark green leaves are rounded and cup shaped and quite densely held.
Will still grow to 6m, however like both 'Little Gem' and 'Kay Paris' if pruned in winter it can easily be kept more compact.
Large white flowers to almost 20cm.
Evergreen Magnolias are fairly versatile, in general,  evergreen magnolias prefer full sun to part shade.


In pots in temperate and humid climates, the leaves can develop cotton cushiony scale.

Posted by Real World Gardener at 11:46