How to Grow Healthy Seedlings and Patty Pan Squash

What's Going On With My Seedlings?

People have been turning to gardening in droves this year, and for one reason or another, they’re into growing their own food.
A lot of new gardeners, though, are finding it difficult to either get those seeds to germinate, or keep those seedlings going. 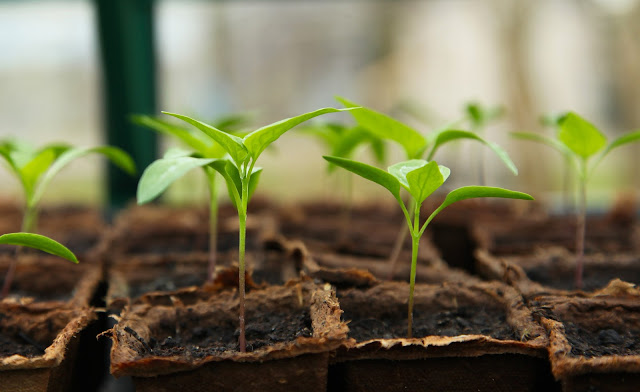 Here are some of the common problems:
Hopefully you’ll be inspired to get back into growing from seed and have all the information you need to get those seedlings going.

So what help do they need? Let’s find out more by listening to the podcast.
I’m talking with Steve Falcioni from www.ecoorganicgarden.com.au

If you have any questions about seedlings, drop us a line to realworldgardener@gmail.com or write to 2rrr PO Box 644 Gladesville NSW 1675

Summer Button Squash is the yellow or green saucer shaped members of the Cucurbit family that includes pumpkins, melons and zucchinis. Cucurbita pepo. 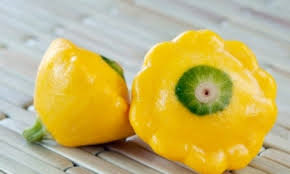 If you don’t like the taste and texture of Button Squash, some even call patty pan squash, maybe you need to buy a different variety to zhuszh up your taste buds.

A Bit of History
Did you know that squash comes from a native American word which means eaten raw or uncooked?
No surprises that archaeologists have traced squash origins to Mexico, dating back from 7,000 to 5,500 BC.

Button squash are small veggies that look a bit like space ships with scalloped edges.
It’s a twining vine with large, broad, spiny, lobed leaves and an angled, prickly green stem.
Squash grow to between 3 and 5cm in size, and the vines like to spread out, but will follow a trellis if they’re tied to one. 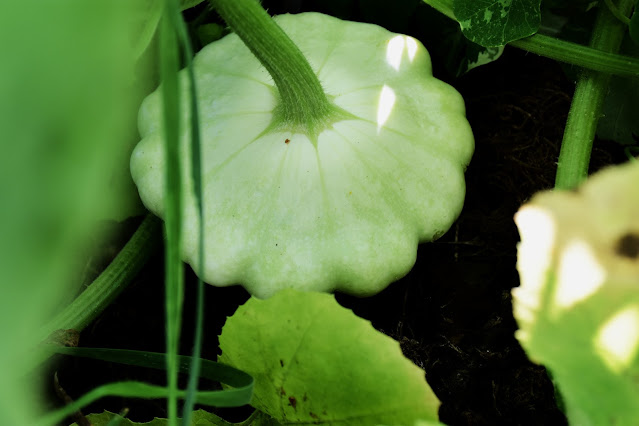 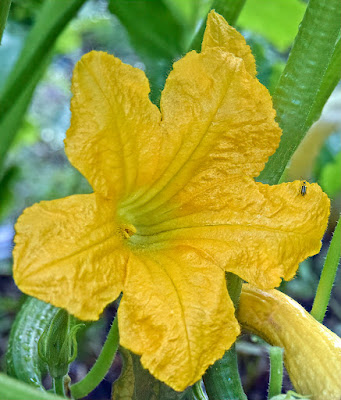 Flowers on Squash, where are they?

Squash have male and female flowers that bees, flies, wasp or other creatures must pollinate it. Only after fertilisation, grow those little buttons.

If you got male and female flowers but not too many squash, plant plenty of flowers alongside your squash otherwise you’ll end up having to hand pollinate using an artist’s paintbrush.
Mostly gardeners start to worry when they see only male flower.
It is perfectly normal for the males to arrive first, and, they do so in big numbers.
A week or so goes by without any ladies appearing, and you are beginning to think there's a problem.

Fertilising your squash
Squash are, like most vegetables, heavy feeders and need lots of fertilizer and water.

Harvesting
Pick your button squash carefully by cutting them from the vine through their stem.
If you plant an open pollinated type, (doesn’t have hybrid in its name) you can let one or two squash grow out until they are completely ripe and save the seeds from them at the end of the season.
Some varieties from various online seed suppliers.
There’s a French heirloom variety Squash Jaune Et Verte especially for those of you who are not convinced about the merits of growing squash.

Scalloped patty pan squash, pale green, harvest 7.5cm—10cm, fine texture, medium sized bush, very productive over a long period, popular traditional variety for home gardens. 47-56 days.
Seeds per packet: 17
Why are they good for you?
Summer squash is very low in calories and high in fibre.
Button squash is rich in beta-carotene an excellent source of vitamin C, folic acid and calcium.
One cup of summer squash has nearly as much potassium as a banana!
They also contain the valuable mineral nutrient phosphorus.
Button squash are vitamin C
The darker skinned squash supply some beta carotene.
Did I say they were low in calories?
100g of squash has just between 85 and 105kJ.

THAT WAS YOUR VEGETABLE HERO FOR TODAY

Posted by Real World Gardener at 16:27 No comments:

Are you missing the Christmas spirit? In Australia it was mostly too hot around Christmas time to partake in mulled wine. Winter isn't that far away, and for some people, Christmas in July is a thing.
That would include mulled wine.
Right now though, you could make some mulled wine jelly to relive some of that Christmas cheer which just seems like a faded memory.

You may have heard of the spices that go to make mulled wine, a traditional drink in the northern hemisphere at that time of year.
But here in Australia, it’s too hot, so what else can we do with these spices? 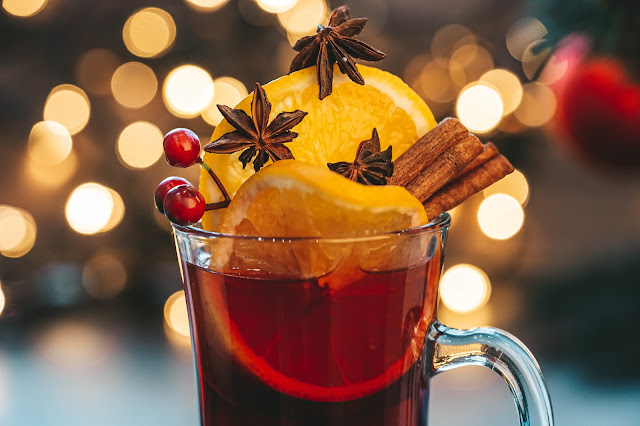 METHOD: Mulled Wine
In a saucepan
POUR 1 bottle of red wine
ADD1 cup of brown sugar,
ADD 1 fresh lime
ADD 1 fresh quartered orange.
ADD2-3 tablespoons of mulling spices.
SIMMER gently for 30-40 minutes DO NOT BOIL
STRAIN: into a jug and serve while warm.
If you’re keen to experiment with your own recipe, then use real vanilla pods, cinnamon quills, fresh citrus and star anise at the very least.

Apart from mulled wine jelly, and mulled wine fizz, there’s also mulled wine glazed ham. So experiment away. Listen to the podcast to find out more.
I’m talking with Ian Hemphill from herb and spice expert from www.herbies.com.au
If you have any questions about spices in mulled wine spice mix, drop us a line to realworldgardener@gmail.com or write to 2rrr PO Box 644 Gladesville NSW 1675

Today’s vegetable hero is -Celery Leaf , Leaf Celery or Chinese Celery. Leaf celery is also called Cutting Celery, Parcel, Smallage, Zwolsche Krul, and German celery.
Leaf celery sounds like it’s all leaf, but that’s not the case.Yes there’s a lot of leaves, but they’re on top of long, albeit thinner stalks.
In colder zones, if you can nurse year-old plants through winter, they will send up a huge flush of stems in early summer, followed by lots of flowers and seeds.
As a true biennial,  cutting celery is happy to produce zillions of seeds at the end of summer here in Australia.
Celery Leaf tastes similar but slightly better than regular stalk celery!
I would say it tastes a little stronger than stalk celery or celeriac.

A Bit of Hsitory
Did you know that leaf Celery has been around for a long time and was in fact used by the ancient Romans as a medicinal herb.
Supposedly, Celery seed has been used for around 3000 years as a seasoning for food.
Did you also know that crushed celery seeds are steam distilled to make celery oil?
This oil is used for flavouring sauces, meats, liqueurs, perfumes, cosmetics and soaps.

Some gardeners have run out of room in their veggie bed already-full of tomatoes, Basil and whatnot.
Never fear, Leaf Celery will grow in large pots because it’s a compact plant that grows to 45-60cm in height.
When to plant:
In cool temperate districts, Spring and Summer are your sowing times, in temperate and sub-tropical zones, you have from Spring right through to Autumn, 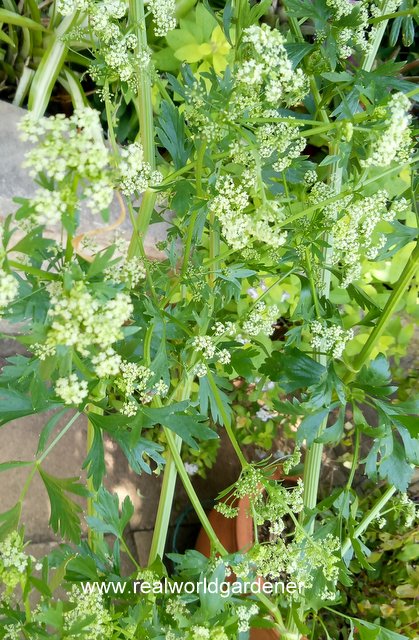 Arid areas, the only time you can’t really sow it is in summer, and tropical districts win the jackpot, because they can sow it all year round.

How to grow:
From putting the seed into the ground or pot, it’ll take around 2-3 months.
Like most veggies, Leaf Celery needs full sun but can do alright in part shade in soil that’s not too dry.
You can start them off in punnets if you like because they don’t mind being transplanted.
Sow the very fine seeds thinly, and only 5mm (1/4”) deep.
Be careful not to cover the fine seeds too much because they need light to germinate.
For fine seeds I tend to use a light cover of vermiculite which I then mist to make moist.
Once the seeds have germinated it’s a good idea to thin them out around 30cm (12”) apart.
TIP: number 1: Don’t let them dry out.
TIP: number 3 and now for the Celery Seed.
If you leave your Celery leaf over winter, the plant will bolt to seed in Spring.
What can you do with that?
Apart from replanting fresh seed, the seeds are actually edible.
What you can also do is grind it up in your mortar and pestle with a little sea salt. Better than from the supermarket shelf.
Plus you can enjoy the dainty white umbels of flowers.
After a couple of months, pick leaves as you need them to put in soups, stews, stocks and sauces.
A few eaves go well in salads with a strong blue cheese or some or cured meats.
Packed with flavour and fibre, it's best to thinly slice cutting celery crosswise or diagonally.
A sharp knife makes quick work of slicing and dicing any type of garden celery.
Use it as you would regular celery, eat it raw or cooked in long slow cooked meals, or as flavouring in sauces.
Why is it good for you?
The leaves are brimming with five times more magnesium and calcium than the stalks. They're also a rich source of vitamin C and antioxidant’
The good thing is Leaf Celery is low in carbs, and has even a small amount of fibre.

THAT WAS YOUR VEGETABLE HERO FOR TODAY
Posted by Real World Gardener at 18:30 No comments:

The Art of Fermentation: Just a Cabbage

THE ART OF VEGETABLE FERMENTATION

Have you ever wanted to ferment vegetables but thought it was a bit too hard?
Perhaps you’re an avid fermenter but need to know more.
In this new segment I find out that it’s actually easy to start fermenting.
Holly describes herself as an 'old fermenter.' 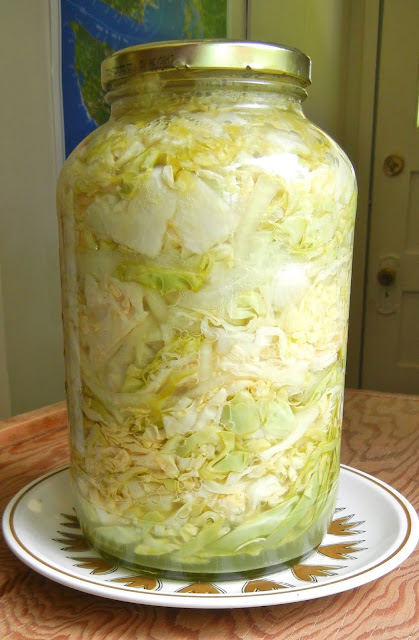 Jokes aside, what's the first thing you need to know before you start fermenting any vegetable.
Do you need high end equipment?
Fermenting is a process that happens in the absence of air.
It turns out that a clip lock jar or a glass jar with a screw top lid would suffice. Or you can use a plastic jar.
NOTE: the lid needs to have a coating on it which most would have if they were on jars that were bought with food in them. These jars are perfect for re-purposing for fermenting.
Cabbages and other root vegetables are ideal for fermenting.
METHOD:
PICK a cabbage that is heavy for it's size, preferably an organic one.
Should be dense and tightly packet.
STRIP off outer leaves.
CUT the cabbage into four and cut the heart out of it.
SHRED your cabbage finely, Holly likes it between 3-5mm in width so it has some crunchy.
If your ferment comes out mushy then air has entered into the process.
ADD 20gms of fine ground sea-salt to every kilo of cabbage.
RUB sea salt into cabbage until it releases moisture-make sure it's vigorous , releasing plenty of liquid.
There should be enough liquid to completely submerge the cabbage in the jar.
STUFF into a jar and cover with the liquid.
PLACE one of the previously discarded whole leaves on top of the shredded cabbage in the jar.
I’m talking with Holly Davis, whole food chef, and educator.
Let's find out more

Dry Fermentation Process: we're doing a cabbage.
The whole leaf on top of the shredded cabbage is the 'plug.'
Leave some headroom in the jar so the fermenting process doesn't bubble over.
The cabbage should start bubbling which is the fermentation process. 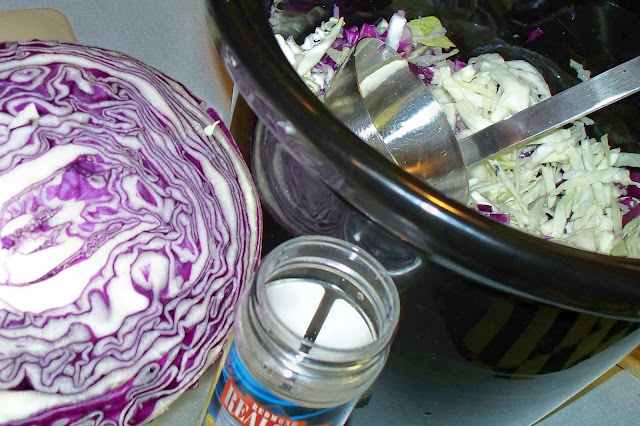 LEAVE it out of the fridge but in a cool spot such as a tiled floor.
WAIT ten days then taste it. Before this time it doesn't taste very nice.
You can leave it longer if you like.
PROBLEMS:
White yeast growing on the surface needs to be removed otherwise it will spoil the flavour.
If you see mould, throw it out and start again.
Once you like the flavour, put it in the fridge, it will slow the fermenting process.
Let's find out more.
Posted by Real World Gardener at 18:01 No comments:

Email ThisBlogThis!Share to TwitterShare to FacebookShare to Pinterest
Labels: fermenting a cabbage, Holly Davis, how to ferment, the art of fermentation
Newer Posts Older Posts Home
Subscribe to: Posts (Atom)