Grafting Techniques: What You Need To Know.

If you’ve ever grown a tree from it’s seed, such as an orange lemon or avocado, you probably were disappointed by the result.
I daresay, that firstly, it took a long time for it to fruit, and when it did, it was nothing like the fruit that the seed came from.
After all apart from the novelty factor of  being able to grow a tree from a tiny seed, the time involved isn't really worth the effort. So what to do instead?
Grafting is a method that would vastly improve the result all round but the word itself sounds terrifying if not complicated!
There is after all the possibility that you'll end up slicing of the tip of your finger with the super sharp budding knife, or at the very least drawn blood from the deep wound that resulted from a slip of the wrist.
I confess to having done that.

Practice makes perfect and I would recommend wearing gloves before attempting to do any type of grafting.

So What is Grafting? 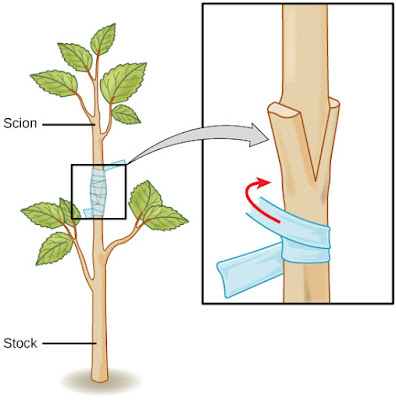 Grafting is a swag of techniques that involves having a root stock that is happily growing in the ground or in a pot, whose upper part you will cut off completely.
Next, you attach a scion, a piece of plant whose features you really like, such as fruit size and flavour.
There are of course plenty of other reasons why you want to try your hand at grafting.
Some of these are to improve disease resistance such as for roses or fruit trees or dwarfing.
Dwarf  trees are the result of grafting a scion from a tree of full size fruit onto dwarfing root stock. 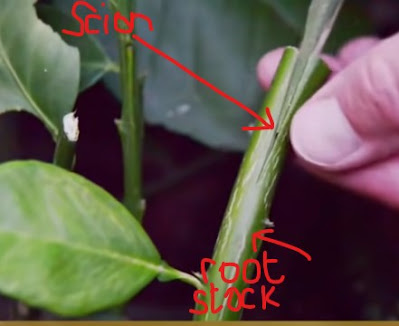 TIP:If you’ve never tried grafting, make sure you get the right tools before you start.
You’ll also need the correct root stock.

Let’s find out more by listening to the podcast. I'm talking with Margaret Mossakowska of www.mosshouse.com.au

In part 1 of grafting techniques Margaret Mossakowska and I talked about how growing from a tree such as an orange or lemon from seed isn’t all that successful unless you graft it onto hardy rootstock.

In this segment, we refresh some of those points and take you onto more grafting techniques.

There are many types of grafting that are available to be used, some more complex or more exacting than others.

My Take On Grafting

Cleft grafting I find is quite straight forward and easy to get right.

Camellia 'Red Crystal' is a cross between C. reticulata ‘Crimson Robe’ and C. japonica ‘Wildfire,’ however, both are slow growing. and don't grow so fast in temperate Sydney.

I find this is a faster alternative, plus Camellia sasanquas are very hardy and less prone to root rot.

The grafted union in most cases needs to be above the ground. There is one exception and that is with lilacs(Syringia vulgaris.). Lilacs tend to sucker if grown on their own rootstock so they are grafted onto privet rootstocks.
Things to Watch Out For.
Once you've successfully grafted your desired planted, whether it's a citrus or camellia or some other favourite, there's still room for failure.
Let’s find out more by listening to the podcast. I'm talking with Margaret Mossakowska of www.mosshouse.com.au
NB:If you’ve never tried grafting, make sure you get the right tools before you start.
You’ll also need the correct root stock.

Posted by Real World Gardener at 16:38 No comments:

Modern day gardens are much smaller than they used to be.
Many gardeners and would be gardeners, hanker for a produce filled garden with as many different edibles  as befits their lifestyle.
If you you only have a small space such as a paved courtyard or even just a balcony, but don’t know what to do next, this next segment will spur you onto creating your own oasis, without digging up the stones or pavers. 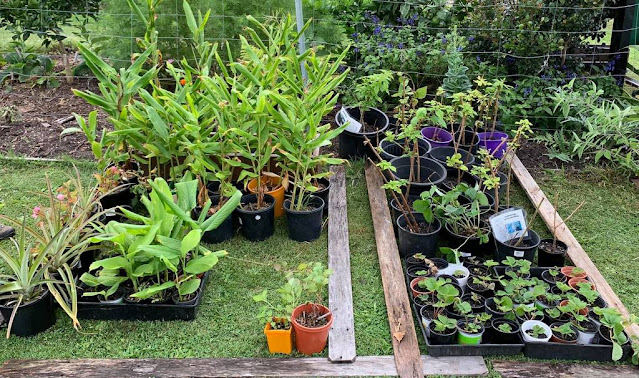 Soil prep is key for Corinne.

Let’s find out more by listening to the podcast.
I'm talking with Corinne Mossati drinks writer and founder of the gourmantic garden website.
www.thegourmanticgarden.com

Don’t be put off by lack of space you may have because no space is too small to have plants, even if it’s just herbs on the kitchen windowsill.

If you have any feedback email realworldgardener@gmail.com or write in to 2RRR PO Box 644 Gladesville NSW 1675
Posted by Real World Gardener at 15:20 1 comment:

Bush Tucker Plants by 5 You've Never Heard of Before

Not all fruiting vines or canes come from the northern hemisphere, Australia has quite a lot of its own.
These plants have similar fruits and are easier to grow than there northern counterparts so why are we growing them more?

My experience is observing one such plant in Sydney Botanic gardens, scrambling on a stream bank near the Palm House. This plant is part of the native garden along with banksias, grass trees, lomandras, carpobrotus and many others, including a peppermint gum.

The habit of rubus species is to keep suckering and spreading, much like the non-native blackberry bushes, so take care where exactly you plant it in your garden.

Listen to the podcast to find out more.

PLANT OF THE WEEK Number 2

Possibly, listeners would be familiar with the term ‘old man saltbush’ or even have seen this plant growing somewhere.

But I daresay, you would not have heards that parts of this plant are considered bush tucker.
There are many bush tucker plants that are not that well known and this is another one of them.

"Shrubs are grown in hedgerows as block or alley plantings across the farm to provide high-protein green feed during periods of feed shortage."

In the home garden, if you’re first planting out old man saltbush, don’t expect it to survive without any water at the start. After the first warm season, then it’s good to go on just what falls out of the sky in rainfall.

Let’s find out more by listening to the podcast with Adrian O' Malley horticulturist and native plant expert.

PLANT OF THE WEEK Number 4

Common Name:Warrigal Greens
Family: Aizoaceae
Native Habitat: fcoastal areas, sandy shorelines or inland rivers and salt marshes
Description:A ground cover that can act like a dune stabiliser.
Height-Width: 2 x 2 m
Flowering: tiny inconsipicuous flowers Spring and Summer
Fruiting:Juicy fruit produced in clusters.
Position: Full sun or part shade.
Attributes: Dry tolerant once established.
These greens can be a spinach substitute, and although one of the names is NZ Spinach, here in Australia, we prefer to call them Warrigal greens.
High in oxalic acid so need to be blanched for 1 minute before using raw in salads.

Let’s find out more by listening to the podcast.
I'm talking with Adrian O’Malley, horticulturist and native plant expert.

PLANT OF THE WEEK Number 5

Common Name: Appleberry
Family: Pittosporaceae
Native Habitat: found mainly along the east coast in a variety of commnityes such as coastal heath and sclerophyll forest.
Description:A twining climber or groundcover.. Pale lance shaped green leaves have wavy margins.
Height-Width: 1.5 x3 m
Flowering: September to December. Pendulous bell-shaped flowers on branch tips, similar to correa flowers.
Fruiting: Oblong berries appear on the bush in summer while the plant continues to flower. At first green to purple that turn yellow when ripe. Taste is similar to green kiwi fruit. Size is similar to sultana grapes. (Those that are elongated having been treated with gibberelins.)
Position: Full sun or part shade. Will become more sparse in shade.
Attributes: Long flowering and fruiting period. Requires watering and regular pruning in cultivation.
Over the past few weeks I’ve been focussing on bush tucker plants, some of which you may not have heard of before.
The appleberry is no exception because even though it can be found in national parks, most people would walk by and not realise that it’s a bush tucker plant.
For Sydneysiders, it can be found in Lane Cove National Park.

There are many bush tucker plant nurseries that supply these plants online and are able to post out to most areas of Australia.

If you have any questions or feedback or have some information to share, drop us a line to realworldgardener@gmail.com or write in to 2RRR PO Box 644 Gladesville NSW 1675 and I’ll send you a packet of seeds.

Posted by Real World Gardener at 18:28 No comments: