Stunning Coastal Pincushion Bush and Which Mushrooms to Pick

Mushroom picking sounds like a great idea, but around the world, people die from eating poisonous ones.
Not only do you need to know where to go but also how to tell which are poisonous and which are not.
Authorities recommend to only forage in the supermarket aisles or buy a mushroom kit and grow your own!
However, if you go out with a knowledgeable guide, you may be able to enjoy this pleasant past time without fear of keeling over.

In Australia, cool climate pine forests are the best places.

State owned forests have public access and picnic tables for you to enjoy your mushrooms after picking them.
Forests need to be 10 - 20 years old so that the fungal networks have had time to re-establish after the intensive agriculture that's involved in starting forest plantations.

Saffron Milk Cap mushrooms (pictured above) exude an orangey white sap when cut.
This sap oxygenates to a green colour, so it's not mouldy.
These are the easiest to identify.

Slippery Jack Mushrooms (pictured here) don't have gills on the underside but more of a foam structure.
You can also find mushrooms where horses and cows are pastured. these are mostly button mushrooms and harder to identify. 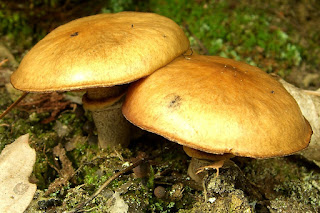 TIP: Cut the mushrooms instead of pulling our digging them out. By doing this you're letting spores for future generations of mushrooms remain in the environment where they grow best.

Margaret says that when she takes people out foraging for mushrooms, that she asks them to tip out their collected mushrooms onto a blanket.
By doing this, Margaret can check each and everyone one of them to make sure that they’re not the poisonous ones.
If you have any questions about mushroom picking or have some advice or photos to share, why not drop us a line to realworldgardener@gmail.com or write in to 2RRR P.O. Box 644 Gladesville NSW 1675.

Are you tired of growing the perfectly ordinary?
Perhaps you’re not tasting that much difference between home grown and shop bought?
Of course, your will be organically grown though.
On the other hand, you might have easy access to local fruit and veg markets, whether organic or not, that can grow the staples like potatoes, onions and carrots much cheaper.

So instead of growing those, you could try going for Jerusalem Artichokes, Mizuna, Giant Red Mustard, Choy Sum, and Japanese Chrysanthemum for starters.

You don’t even have to be a computer nerd because seed companies are quite happy to send you their seed catalogues.
Pick something out from the descriptions in the catalogues that you haven’t tried before.

Here’s a few details about some of the unusual ones that I have mentioned in previous vegetable hero segments.

Japanese chrysanthemums are sometimes called chop suey greens.
You can use the leaves and flowers of this vegetable.
So this is a warm season crop, but never mind, put it on your to do list for next Spring.
Pick the leaves 6 – 8 weeks for your salads and throw the flowers in as well.

Chicory is one I’ve mentioned as a vegetable hero, but it is rather unusual/
This one gets sown in Summer and you can use the outer leaves for a few weeks before you let the heart develop over winter.

Jerusalem artichokes are rather a large plant that you can even grow in a large pot. 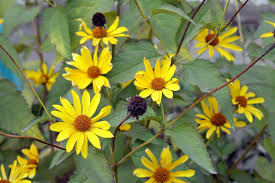 You eat the tubers in winter but plant them in Spring. 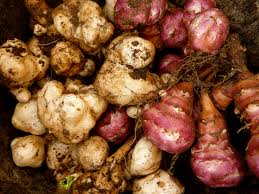 Easy to re-grow from fragments or just re-plant a couple after you dig them up.
Flowers are nice and tall, and look like small sunflowers. 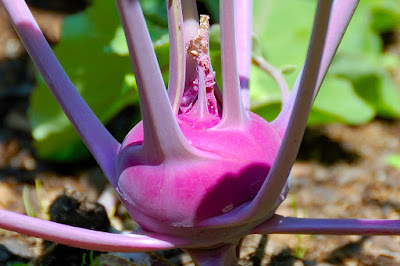 Kohlrabi is another one I’ve mentioned as a veggie hero but a lot of gardeners just don’t grow it.
You know you can eat kohrabi raw. It’s crunch and sweet but not too sweet.

What are Kohrabi?
These are round, white, green or purple “roots”, which are actually the swollen stem bases of a short, squat brassica plant with blue-green leaves.
Sow the seeds in Spring and pick them what they’re at tennis-ball size in summer to grate raw in salads or home-made coleslaw, or slice very thinly as raw veg “crisps”.

Celeriac
Another favourite of this segment is the ugly looking Celeriac.
You can sow this one in summer and Autumn in most places in Australia except for the tropics.
It’s not suitable to grow there. 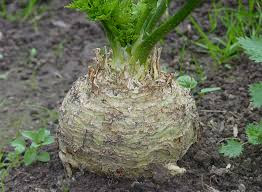 These plants produce large spherical “roots” that grow half above ground at the base of their stems.
The usual size you see in the supermarket is roughly 10cm, a very pale brown, rough, almost acne’ed looking ball with lime green tops.
The green tops look a bit like celery, and the smell is similar but a bit stronger.
The thick, rough brownish skin covers a creamy white, crisp inside that’s slightly hotter tasting than celery.
Celeriac also grows more easily and keeps longer than celery, making it an excellent winter vegetable.

New Zealand Spinach
New Zealand spinach is a low, floppy, ground-covering plant with thick, fleshy leaves, this tastes just like conventional spinach when cooked.
It’s a frost-tender ground cover type of plant that can grow in extremely dry conditions once established.
For something really out of the ordinary, not a vegetable but a fruit and it’s white instead of the tradional red. 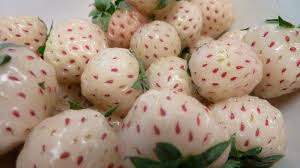 White Strawberries
White strawberries, also called Pineberries, are available to buy from some nurseries as plants but not seeds.
They’re not genetically engineered but rather an old variety – I bet you didn’t know that all strawberries in South America used to be white!

Inside these purple pods the peas are as green as any other but their attractive Aubergine colour looks beautiful on the vine.
The colour is practical as well because the pods are easier to see.

Oca New Zealand Yam
Finally there’s Oca ‘New Zealand Yam’
Considered a ‘Lost Crop of the Incas’, this is another new variety for me and I’ve yet to taste them cooked.
Raw, they’re like a mild crunchy radish but it’s said that when this South American root vegetable is boiled or roasted that the flavour and texture is like a lemony potato.

The tops of this plant look very similar to Sorrel, a wild plant with a lemony tang flavour that can be used in salads and soups.
The tubers only start growing in size after the very first frost so you need to leave them in the ground for some weeks after that happens.
If you dig them up earlier, you’ll only get a few tubers.

Have you ever been stunned by the flowers of a plant that you felt the need to buy one immediately?
Sure you have, it’s one of those things that gardeners get and it’s so very hard to resist.
This next plant falls into that category and I hope you’ll be inspired to rush out and purchase one.
But first, let’s find out about this plant.
I'm talking with the plant panel : Karen Smith, editor of Hort Journal www.hortjournal.com.au and Jeremy Critchley, The Green Gallery wholesale nursery owner. www.thegreengallery.com.au
PLAY: Leucospermum Patersonii_26th April 2017
The silver edged pincushion plant is such an appropriate name for this beauty.
The leaves are a feature with their silvery edges but the flowers, are more so coming in clusters of three.
The added benefit of the closely clasping leaves is that the bush is densely covered.
The flowers are bright orange to crimson and very showy and appear on the bush in groups of three.
Flowering is from July to December.
the coastal Pincushion bush does well in limestone derived soils, therefore alkaline.
However it should do well in most well drained soils around Australia.

What to watch for:
Root rot or phytophthera can cause sudden death for plants in the Proteaceae family.
This can happen after long spells of dry weather followed by a period of heavy rain.
As a preventative measure drench or spray with Phosacid sometimes marketed as Anti-Rot.

If you have any questions about the Silver Edged Pincushion Plant, why not write in to realworldgardener@gmail.com