PLANT OF THE WEEK x 3

Etymology:Kennedia...after John Kennedy, an English nurseryman
rubicunda...referring to the colour of the flowers
Flowering: Spring with pea like flowers, that is, a standard of 4 petals, a keel and two wings.

Grows: 3m high x 3m wide
Suitable as a trellis climber or covering embankments. Bird attracting.
This next plant is a climber as we have been taking about climbers for a couple of weeks.
It’s got these attractive scarlet to pink flowers but what else?
Let’s find out…
I'm talking with Adrian O’Malley, qualified horticulturist and native plant expert.

The running postman title is probably because of the red flowers that appear on this fairly vigorous vine or creeper.
Did you also know though that it’s a very useful medicinal plant to grow?
Apparently its leaves were bruised and drunk as a tincture when recovering from illness. Don’t know what sort of illness though.

Use it as a groundcover, for arches, teepees and vine supports.
some will say that it's happy growing in a pot.  I can't be sure about that.
Dusky Coral Pea does best in full sun but will tolerate part shade. 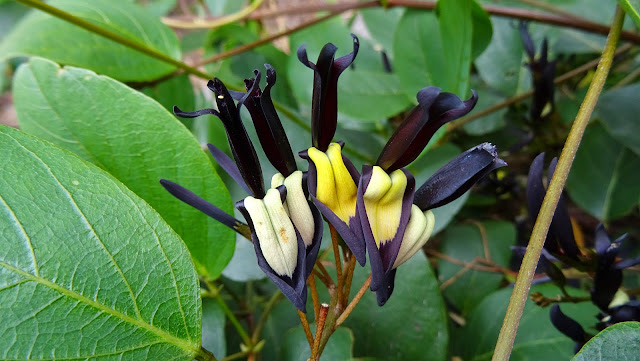 It needs to be protected from frosts.
There is another cultivar Kennedia nigricans that Adrian and Marianne mention. This has black and yellow coloured flowers.
A cultivar known as Kennedia nigricans 'Minstrel' was registered with the Australian Cultivar Registration Authority by Goldup Nursery of Mount Evelyn, Victoria in September 1985. This cultivar was selected from a batch of seedlings in 1983 and has a pale colouration instead of the yellow, which appears almost white. 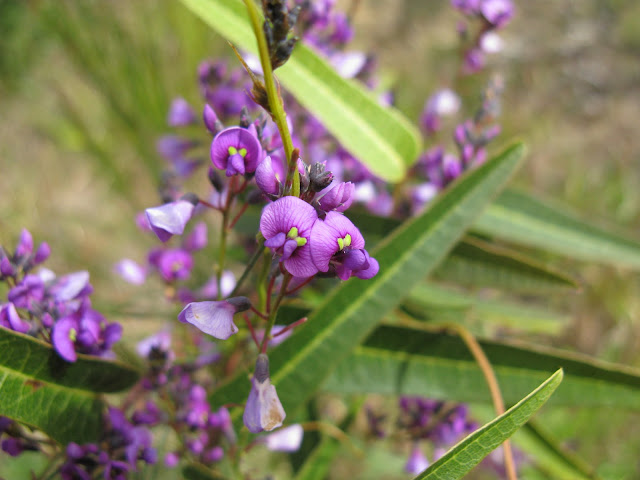 Grows:the species form grows to 6m. There are many other forms that grow only as a sub-shrub or smaller climber.
Etymology: Hardenbergia...after Franziska Countess von Hardenberg.
violacea...referring to the typical flower colour
Cultivars: 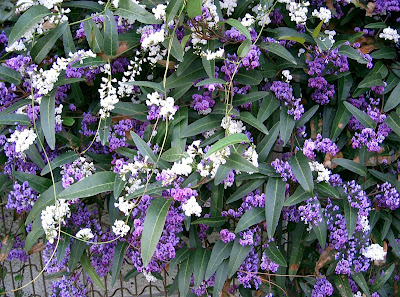 If you love the colour purple in the garden you’ll love this next plant because it’s got it all.
It’s tough, it flowers for ages, and you don’t even have to do too much to look after it.
Let’s find out more...
I'm talking with Adrian O’Malley, qualified horticulturist and native plant expert.


There’s so many Hardenbergias to choose from that come in not just creepers or climbers, but small little shrubby things that spread a bit.

Some of the shrubby forms of Hardenbergia are very useful for mass plantings, rock gardens, retaining walls and banks for home gardens and larger landscapes.

There are some good shrubby forms on the market such as ‘Bushy Blue’, ‘Purple Spray’ and ‘Regent’ which can grow from 60cm tall (‘Bushy Blue’) to 1.5m tall (‘Regent’). ‘Mini Haha’ is a compact dwarf form but it is not as robust as other types.

There’s also ‘Meema’ will grow to approximately 450mm tall with a 2 metre spread which is ideal for outcompeting weeds and creating a ground cover with a shrubby appearance.

That was Adrian O’Malley, qualified horticulturist and native plant expert.
Hibbertias are sometimes called Guinea Flowers because the flower shape and colour looks like the ancient Golden Guinea coin.
When Adrian has seen it in the bush, it's mostly in open forest or gullies.
The flowers shape and colour is a dead give-away for the hibbertia species.
The "snakes" are the tendrils that twine themselves together and climb up.
Perfect specimen for sloping sites where it can scramble freely.
If you have any questions of course, why not email realworldgardener@gmail.com or write in to 2RRR P.O. Box 644 Gladesville NSW 1675.
Posted by Real World Gardener at 19:02