Tawny Frogmouths can blend into a tree trunk so you wouldn’t know they were there, and they’re often mistaken for Southern Boobooks, but are not owls.
They’re also members of the nightjar family, and are more closely related to kookaburras and kingfishers than they are to owls. What's a nightjar then? Let's find out....I'm talking with ecologist Sue Stevens

Betel leaf is a native plant to Vietnam and Thailand, and  is related to black pepper
If you’ve ever eaten Thai food chances are that you’ve already eaten Betel leaves or at least had food served on a platter of Betel leaves.

Don’t confuse Betel leaf to a different plant to the Betel pepper Piper betle, which is chewed with betel nut.
Traditionally, Betel leaf plant was used to treat fever, as an expectorant, toothache, for coughs, asthma and pleurisy.
Some say it has a somewhat pungent odour and taste, others find it mild with a hint of black pepper. 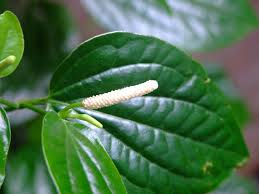 Betel leaf is an evergreen, perennial creeper that doesn’t grow particularly tall. Only to about 1 metre.
Betel leaf has shiny heart-shaped leaves that have a waxy, glossy surface.

The flowers are small –on white flower spikes. 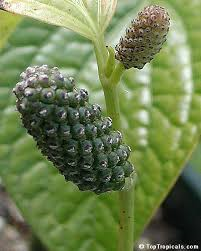 After flowering little dry rounded fruits with little bulges show up –almost like a little like a green/brown mulberry when ripe and can be eaten;
The fruit is sweet  and jelly-like pulp.

So what’s betel leaf got going for it?
As a food, it makes a great 'wrap' for prawns and can be shredded to add to salads and quick stir-fry's.
More on its uses later. 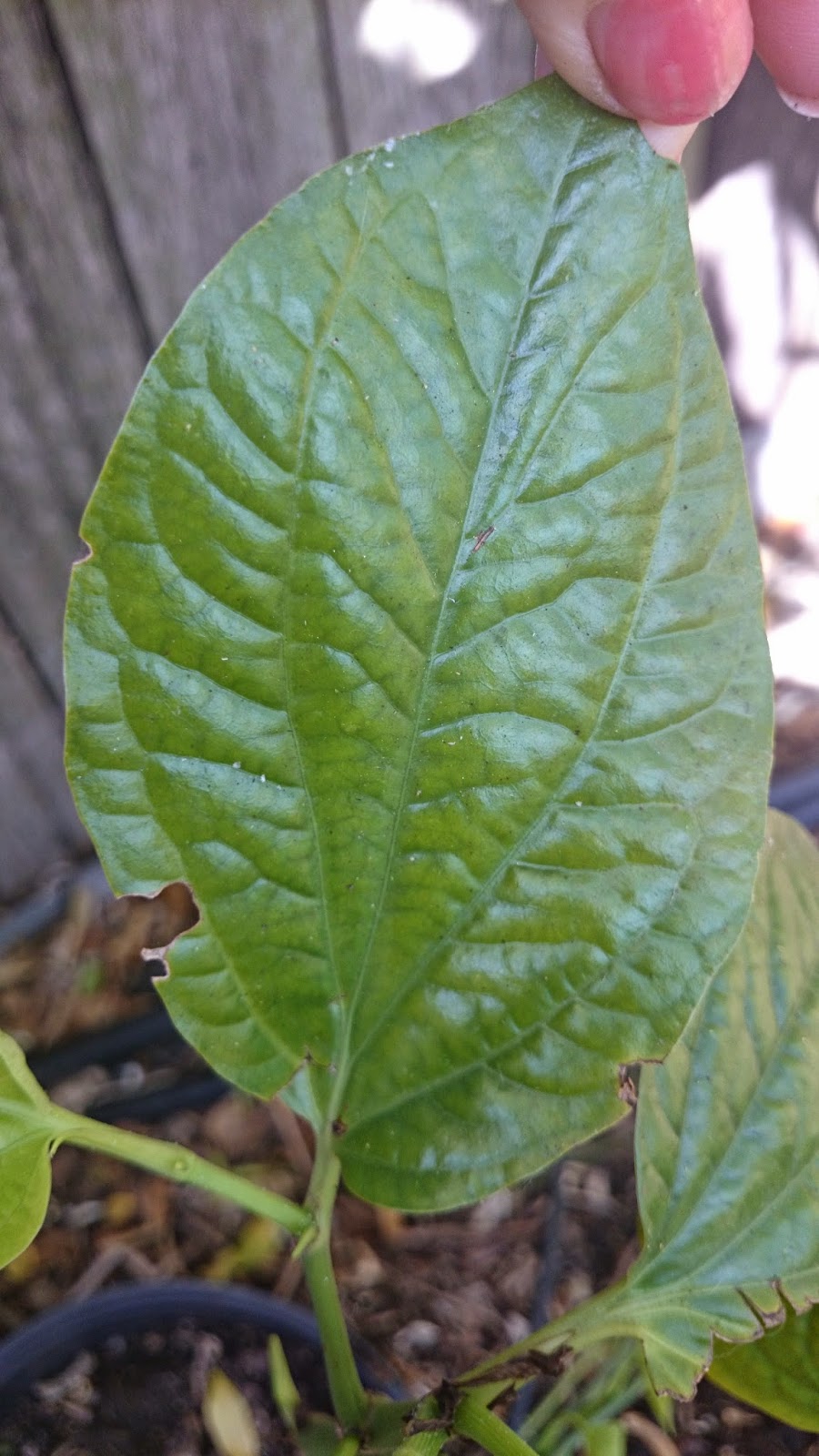 You can grow Betel leaf in most parts of Australia at any time of the year.
Find a spot in fairly good, well-drained soil with partial shade.
Under a tree somewhere is good and keep it moist but don’t overdo it because it doesn’t cope with waterlogging.
Frost will damage the leaves but not kill the plant once it is well established.
Betel leaf makes a good groundcover under trees in subtropical and tropical areas.
In warmer climates Betel leaf grows really well in the right position and because of its habit of suckering can be difficult to remove.
You can grow it successfully in colder areas but not in the ground.
Put your plant in a hanging basket or large pot and move it to a warm, sheltered position in winter. 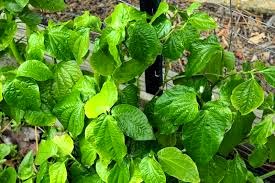 Although I have heard that the characteristic growth of the plant is to grow on the ground and spread out like a ground cover.
As it spreads it sends down roots from sections.
So growing it like a hanging basket might not be the best advice.
You could try keeping it in a large shallow container so it sends down multiple roots.
If you’re wondering where to buy it and don’t seem to have any luck try an Asian veg. shops.
It’s easy to propagate from cuttings at the hot times of the year.
Growers take the top 20cm of the vine and sell it as a bunch to local markets.
You can buy a bunch of Betel leaves, take of the bottom two-thirds of leaves leaving the top few, and recut the bottom.
Put these cuttings in a glass with water and they will be producing roots in no time.
Another method is to take cuttings again about 25 cm long, strip the leaves off the bottom half of the stems and bury to half their length in potting mix.
Cover with plastic or place these cuttings in a greenhouse and keep moist.
Remember Betel leaf plant likes a wet shaded position protected from frost and midday sun; best under big trees. 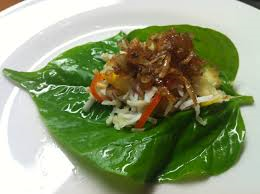 The leaves are large enough to wrap a filling.
Betel leaves are often used ‘open’ topped with something delicious Include them in a stir fry
The spicy leaves are popular in south east Asian cooking, being used raw and cooked. To eat raw in a salad or use as a wrapping the younger more tender leaves are the best to use.
Used in omelettes in Vietnamese cooking  and to wrap mince.
In Thailand, these wraps are a favourite snack, 'mieng kum', using an assortment of fillings, like peanuts, shrimps, shallots with lime and raw ginger.
Use as a herb in rice, salads.... They look great as a garnish too .If you soak the leaves in cold water with a little sugar for 2 hours before use this changes the flavour just slightly.
As the leaves are a very attractive heart shape, they’re often used as a base to line platters, with foods arranged on top.
The white flower spikes develop into a small fruit that can be eaten.
Fresh leaves are prone to dryness and fungal rots. Store like lettuce: in the fridge for a few days (3-5) in a sealed plastic bag. Use as soon as possible after purchase.


WHY ARE THEY GOOD FOR YOU?

Good source of protein, potassium, nitrogen and minerals.
The plant has many traditional medicinal uses. Malaysians use the leaves for headaches, arthritis and joint pain. In Thailand and China the roots are crushed and blended with salt to relieve toothache.
In Indonesia it’s used as a natural antibiotic, and drunk as a tea daily to benefit health. This tea is also used to keep the body free of unpleasant smells of perspiration.
AND THAT WAS OUR VEGETABLE HERO SEGMENT


Not that long ago I went to the Australian Garden Show to see what was going on the in garden design world.
Sure enough there were some fresh new ideas from around the country.
Today is one of three designers that I managed to interview from the show who had on display is concept garden-My Island Home.


So what is concept gardening? Or is it garden conceptualism?


In either case this is design in which a single idea, or concept, is used to underpin everything.
But perhaps the most celebrated conceptualist landscape is the Diana memorial fountain in Hyde Park, England designed by Kathryn Gustafson and Neil Porter. The central concept of this piece was the late Princess of Wales herself; the moods and undulations of the ring-shaped watercourse reflecting the Diana's own life.


Let’s find out what Phil had in mind.

Native Frangipani-Hymenosporum flavum
An absolutely stunning tree, and one of our own!
The Native Frangipani is native to most of the East Coast of Australia, from Sydney to Cape York, and also PNG.  Used as a street tree in Perth so what’s so good about it?
Native Frangipani can grow to 15metres in it’s native habitat, but on poorer soils, I’m going for about 5 metres max.


I think it does better in clay soils even though it’ll grow on other soil types. I have a friend who is growing one on clay soil as far south as ….Certainly a bigger tree than mine will ever be, but it’s probably about 70 years old.
It’s a fairly open tree so you could grow quite a few things under it.
There is a dwarf cultivar around called “Dwarf Gold Nugget” but I don’t know how available it is.
I have seen it as being available from a native nursery in . It grows to 1metre by 1 metre.
Sounds like it could make a good fragrant hedge. 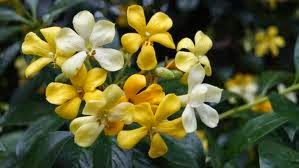 In spring, and especially now, the tree is flowering with the mixture of yellows and whites, and quite perfumed. But not overpowering. The effect of masses of cream and yellow flowers is very lovely and it lasts for about six weeks.
The flowers start off white then as they get older turn a deep sulphur yellow.
It is a little bit drought hardy, that is, it won’t cope without water for long periods. You’ll know it’s been too long when it starts dropping its leaves.
This is a plant for sunny position, but smaller branches are easily broken by strong winds.
So maybe a sheltered position.
If you want a bushier plant you need to pinch of the tip when it’s still small otherwise it’ll be quite an open tree.
You can fertilise with a native fertiliser when it’s still small, but after that, just a mulch of some kind.
If your soil is a bit on the sandy side, watch for borers in the trunk. A telltale sign is a branch dying off here and there. If that happens do a closer inspection for any sawdust type of material, that’s called frass. Scraping that away will reveal the hole that the borer has made.
Butterflies like the blue triangle, like this tree, so do honeyeaters.
I think it easily fits into most peoples gardens and can take quite a bit of neglect.
Depending on where this tree grows, it usually grows to around 10m in warm/tropical areas of the country, smaller in cooler areas.


Foliage is beautiful, glossy deep green up to 15cm long, and flowers are formed in spring. The whole canopy of the tree is covered in sweetly fragrant and yellowy cream flowers which age to a deep orange
Posted by Real World Gardener at 11:53