Indoor plants for warm climates.
So you live in a climate that's warm all year round.

Does that mean you need to grow anything indoors?

True, you can grow almost anything indoors in tropical and subtropical climates, as well as outdoors too.

All you need to remember ks that the most important elements required for healthy houseplants include light, water, temperature and humidity.

If any or all of these factors aren’t properly met, your houseplants will inevitably suffer.

You might be sweltering under the fans in the heat of a subtropical summer but what about your indoor plants?

Can they cope or is this the climate where they thrive the best?

So let’s find out more in this new series on indoor plants.

The good news is that tropical plants usually enjoy warmer conditions and don’t perform well once indoor temperatures fall below 130-160C.
Plus they like a lot of humidity, that means at least 50%, but better at 70% or more.
Most of the tropical, ornamental indoor plants with attractive foliage & colourful leaf patterns are suitable for hot & humid climates.
For example Dieffenbachia or Dumb Cane, Dracaena, house ferns of many kinds, Tricolor plant, snake plant, Philodendron, Money plant, Syngonium etc

If you have any questions about indoor plants why not email us realworldgardener@gmail.com or write in to 2RRR PO Box 644 Gladesville NSW 1675

Aloe vera
The botanical name of Aloe vera is Aloe barbadensis Miller.
It belongs to the Ass-fodd-elacey (Asphodelaceae) family which has a subgroup (Liliaceae) whose members are also the lily plants as well as onions and garlic.
Did you know that people used Aloe vera at least 6,000 years ago in Egypt?

Known as the “plant of immortality,” Aloe vera was depicted on stone carvings and was presented as a burial gift to deceased pharaohs.

So where did the name come from?
Aloe vera derives from the Arabic word “Alloeh” meaning “shining bitter substance,” while “vera” in Latin means “true.”

Did you know that the word Aloe in Sanskrit means Goddess? 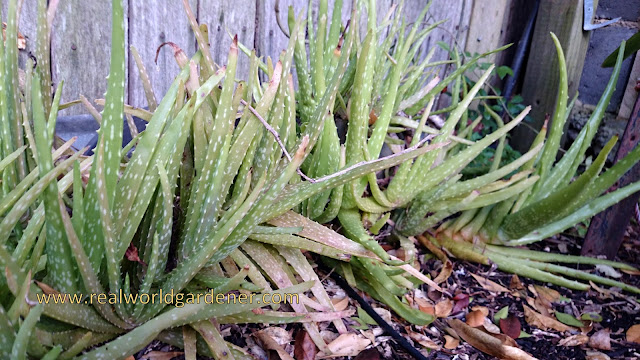 Not surprisingly, because of aloe’s well-known healing properties for the skin, aloe is one of the primary compounds used in the cosmetic industry.
There are even Aloe vera drinks that you can buy, or you can use the juice straight from the plant.
Aloe leaves contain a clear gel that is often used as a topical ointment.

The yellow sap that oozes from the base of the leaf when it is cut is called bitter aloes.

This bitter sap when dried is called latex and contains contains Ann-Thrak-Quinn-Owns (anthraquinones), used quite a lot in medicines that act as a strong laxative. 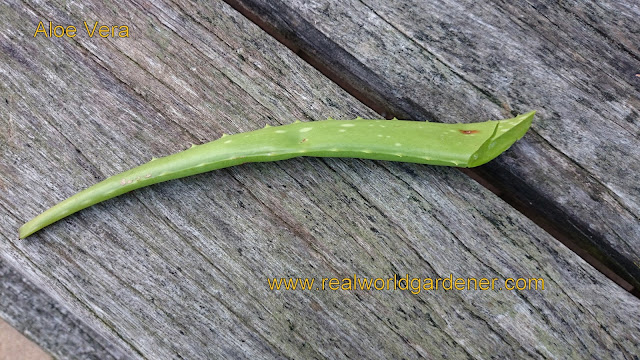 Be warned though, don’t feel you can make your own oral medicines from Aloe and I’m not recommending that you drink the gel straight from the leaf either unlike a vlogger that I mentioned a couple of weeks ago.

The reason is because not only is aloe vera juice pungent to taste, but there’s no scientific evidence that drinking the juice does anything.

On the other hand, Aloe plants improve air quality, and when grown in pots inside the house, help remove toxins from the atmosphere.

So what is Aloe vera?
Aloe vera isn’t a cactus but a low growing spreading, xerophytic, succulent.

It grows mainly in the dry regions of Africa, the Arabian peninsula and nearby islands such as the Canary Islands and Madagascar.

Not to be confused with other ornamental Aloes, Aloe vera has triangular light green fleshy leaves with serrated edges, but also with elongated pale creamy white spots on the leaves.

The Aloe plant is grown in warm tropical areas and because the leaves consist of 95% water, they’re extremely frost tender.

However the root can survive freezing air temperatures, so long as the ground is not frozen and the root destroyed.

On the other hand, Aloe vera doesn’t grow all that big and can be easily moved indoors in colder climates if outside temperatures are less than 5°C.

Place it near a sunny windowsill and it will survive for a few weeks or a couple of months if it needs to.

On the upside, for those gardeners living in warm climates, Aloe vera can cope with temperatures in the high 30’s and can even withstand severe drought.

Don’t water during the winter months if your plant is able to grow outdoors because it’s practically dormant.

Aloe vera tolerates either full or partial sun for at least 8 – 10 hours a day, but will require a little more frequent watering in full sun.

If you’re area receives a lot of rain, you may find that the plant turns to mush so move it under cover.

During the summer months, the soil should be completely soaked, but then be allowed to dry again before re-watering.

If you’re growing your Aloe vera in a pot, because Aloes have a shallow, spreading root system, when it‘s time to repot, choose a wide container, rather than a deep one.

Always use planters or containers with a drainage hole, or put a 3-4 cm layer of gravel in the bottom of the pot so it receives sufficient drainage. Use a good commercial potting mix with extra perlite, charcoal, or coarse sand added.
Or you could use a packaged 'cacti mix' soil.

Fertilising is only necessary once a year in spring but use only half strength. Aloe plants have relatively short roots and heavy leaves, so it’s best to move your plant to a heavier pot when they become top-heavy and tip over.
If Aloe vera runs out of space for its roots to grow, it may start to produce "pups" that can be moved to their own pot .
New Aloe Vera plants are grown by removing these offsets which are produced around the base of mature plants, when they are about 5 - 7cm tall (or larger). They can also be grown from seed.

Has your Aloe vera ever flowered?
Keeping an Aloe vera plant at home is one of the easiest ways to get the freshest and most concentrated gel.
If the leaves start getting burnt on hot days, you ‘ll definitely need to move your plant to a location with light shade.
If the leaves are growing flat and low, that means the need more sunlight. Aloe vera leaves should grow upward or outward at an angle, toward the sunlight.
Growing low to the ground or growing flat outward, is an indication that the plant is probably not receiving enough sun.

Move it to a sunnier area.
If it’s indoors, consider keeping it outdoors during daylight hours.
If the leaves turn yellow or fall apart, stop watering.
Yellowed or "melting" leaves are suffering due to excess water.
Stop watering altogether for the next week (or two weeks during the dormant season), and water less often after that.
You can remove the discoloured leaves from the plant without doing any damage.
Remember, water it only when the soil has become dry.
Using aloe vera gel, that’s the inner portion of the leaf, topically is OK straight from the leaf.

TIP: To use the gel, break off a leaf and cut it lengthwise to expose the inner layer.
Scoop the gel out and apply generously to the area needing treatment. Discard whatever gel is not used immediately, as it will degenerate quickly.

Why is it good for you?
Aloe Vera contains many vitamins including A, C, E, folic acid, choline, B1, B2, B3 (niacin), B6. Aloe Vera is also one of the few plants that contains vitamin B12.
Soothes and heals sunburns because it contains cooling properties similar to menthol.
Takes the sting or itch out of insect bites.
Use it on those joints that have osteoarthritis.
Aloe gel has not been shown to prevent burns from radiation therapy. AND WAS YOUR VEGETABLE HERO FOR TODAY

Keeping Goats with Robyn Rosenfeldt editor of PIP permaculture magazine
Have you ever kept a sheep goat or pig in your backyard in suburbia?
Sounds a bit far fetched but I do remember see a couple of sheep keeping the lawn down in the front yard of near where I used to live which was only 8km from the CBD.
So what questions should you ask yourself about goat keeping and why would you want to anyway?
What are the benefits?
First why keep a goat or two in suburbia?
How much space do you need for say 2 goats?
Do You Want to Keep Goats So That You Will Never Have to Mow Your Lawn?
If so, think again. Goats will eat your rosebushes clean, carefully devouring every single leaf and flower. However, they’re not going to mow your lawn.
They’ll nibble at grass here and there in a sort of unorganized fashion, creating a look very similar to Rod Stewart’s hairstyle.
How much work is involved? Ie milking, feeding, building a goat pen?
Do goats make good pets?
Do I need to exercise my goat and take my goats for a walk?

What information does the prospective goat buyer need before getting their first goat? 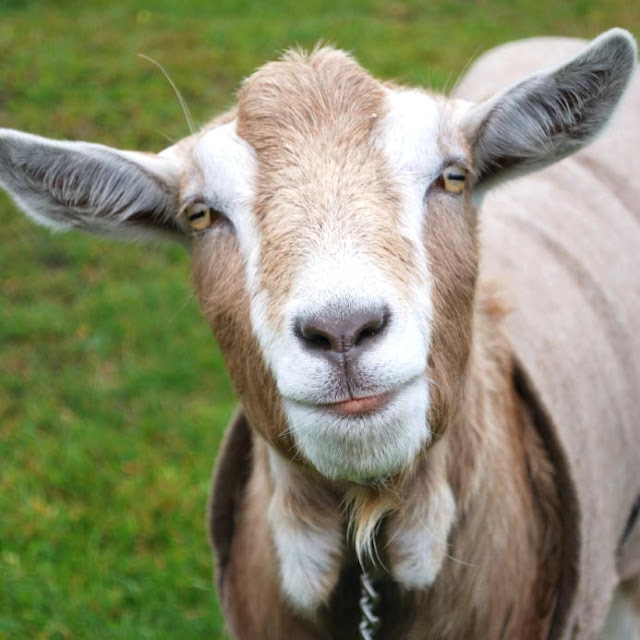 I'm talking with Robyn Rosenfeldt, editor of PIP magazine  to answer all these questions and more. 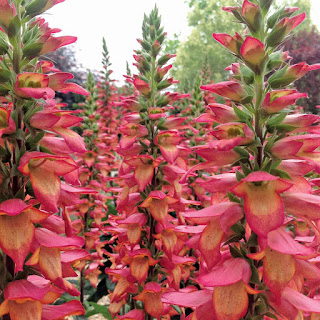 If you’ve ever been to an international flower show in the northern hemisphere, chances are you turn green with envy when you see how easily these flowers can be grown.

These are tall plants that hover above most other flowering annuals you have in the garden but breeders have gone to the trouble of creating a sort of intergeneric hybrid that flowers for several months instead of several weeks. 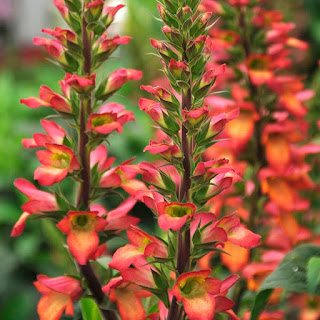 Of course the flowers are magnificent, so let’s find out what it is.

To get more flower spikes and a more bushy plant, just pinch or tip prune the stems.

Plant breeders also recommend because it’s a vigorous tall plant, that if you do want to grow it in a pot, choose a fairly big one.

If you have any questions about this Foxgloves or foxxies as some like to call them, email us realworldgardener@gmail.com
Posted by Real World Gardener at 06:00