How to Get More Out of Your Flowers and Veg Plus a Brown Booby.

What’s On The Show Today?

Find out the components of fertilisers, grow a love apple in Vegetable Heroes, all about no –dig gardening in part 2 of starting from scratch in this new series in Design Elements, plus a ray of sunshine in Talking Flowers.

Sula leucogaster Brown Booby
It’s not just seagulls that frequent our shores but Australia is home to one of the world’s most spectacular divers.
This bird is seen around harbours, river mouths and the like where they are partial to roosting on moored boats, channel markers and other structures.
I'm talking with Dr Holly Parsons, Manager of www.birdsinbackyards.org.au
Let’s find out about it .

Their flight is fairly distinctive - alternating between a few flaps and a glide, often low over the water.
Did you know that the Brown Booby can accelerate up to 90 kph?
The booby’s sleek and velvety profile serves a double purpose, for not only is it aerodynamically adapted for speed in the air, but it is also aquadynamically adapted for swiftly penetrating the surface waters of the ocean.
"In Australia, the Brown Booby is found from Bedout Island in Western Australia, around the coast of the Northern Territory to the Bunker Group of islands in Queensland with occasional reports further south in New South Wales (NSW) and Victoria (Marchant & Higgins 1990). The species is reported further south to Tweed Heads, NSW, and to near Onslow, Western Australia and may be becoming more common in these areas." (ref Birds in Backyards.)

If you have any questions about the Brown Booby, either for me or for Holly or have some information to share, why not drop us a line to realworldgardener@gmail.com or write in to 2RRR PO Box 644 Gladesville NSW 1675.

The reason this topic is being mentioned is because although gardeners realise that pollination is vital in a plants reproductive cycle so that seeds, fruit or veg is formed.

First , let’s start with what is pollination
To simplify things, during plant reproduction, pollination is when pollen grains move from the anther of one flower to the stigma of another flower. 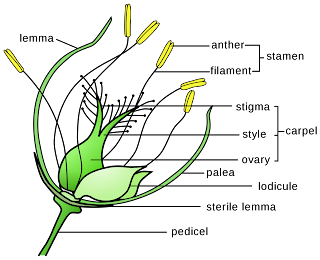 In Corn the male flowers are position above the female flowers, ie, silks, below containing the ears.
The flowers are self-compatible with pollen being spread by wind and not insects.
This means it’s subject to inbreeding depression, so seed saves need to replant at least a hundred plants for true to type maintenance.
Pumpkin and zucchini is another variation in that the separate male and female flowers are on the same plant and are self –compatible just like corn, but relying on insects.
Without insects to transfer the pollen there would be no fruit.

Did you know that our favourite vegetable, the tomato, is a hermaphrodite too?
Botanists call the flowers of tomatoes, perfect flowers because they have male and female flowers within the same flower.
That means they are self-pollinating and don’t need cross-pollination by wind, birds or insects. 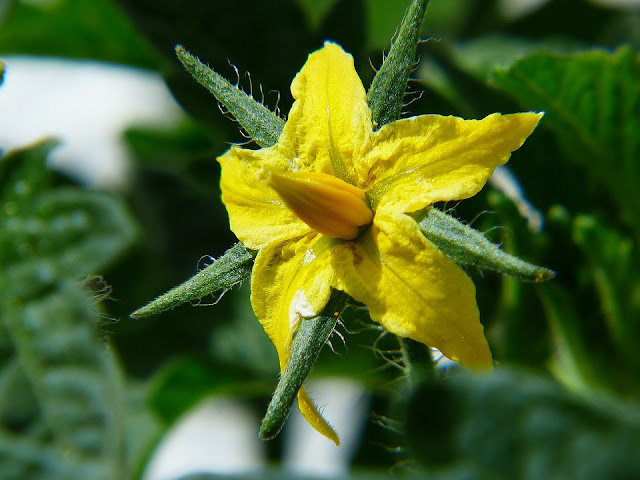 Now to that sticky question, “why isn’t my plant fruiting?”

If you need to you can hand pollinate the cucurbit’s flowers.
To help with fruit set, try misting the flowers with water occasionally and keep up the mulch around the base so the plants don't dry out too much.
This is common with many plants, especially with more northerly climates.
The cure, shade covers .
The Cure:: Get your soil tested. Alter pH levels as indicated by the test.
And if you don’t have enough insects like bees visiting your garden, you know what to do, plant more bee and other insect attracting plants like Borage and Alyssum around your garden.
AND THAT WAS OUR VEGETABLE HERO SEGMENT FOR TODAY!


A Greek Legend
The ancient Greeks have got it all when it comes to romance and mysticism with their stories about various Gods. 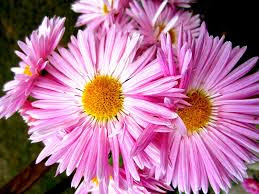 It all started with the ancient Greeks burning aster leaves to ward off both snakes and evil spirits.
According to Greek mythology, when the god Jupiter decided to flood the earth to destroy the warring men, the goddess Astraea was so upset she asked to be turned into a star.
Her wish was granted, but when the flood waters receded she wept for the loss of lives.
As her tears turned to stardust and fell to earth, the beautiful aster flower sprung forth.
I'm talking with Mercedes Sarmini of https://www.flowersbymercedes.com.au

Posted by Real World Gardener at 17:52