Correa glabra and other correas.

Scientific name: Correa species- Correa Glabra, Correa reflexa, Correa alba, Correa nummularifolia
Common name: Native Fuchsia
Family: Rutaceae
Distribution: Mainly eastern Australia  from southeast South Australia, through Victoria to eastern New South Wales and continues into south-east Queensland; it includes eastern Tasmania and Kangaroo Island off South Australia.
Australia has many small shrubs that are equivalent to if not better than some northern hemisphere plants and this one is no exception.
Plant breeders love this plant so much that there are now many hybridised forms with bigger flowers or flowers on a plant that can take full sun.
Correas are generally easy to grow.
You need to know which species of correa you have so that you know their particular requirements.
To grow correa at its best, a light sandy soil with good drainage and a position protected from wind, with broken or morning sunlight, is desirable.
Groups of three to five offer added protection and enhance visual appeal. 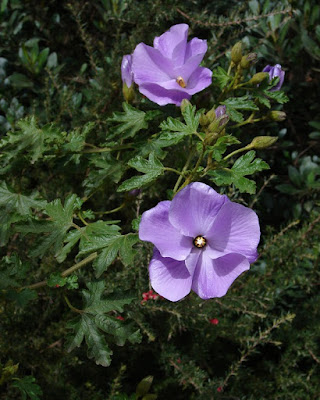 As in all Hibiscus, the flowers open in the morning and last one day.

A. huegilii is a prolific flowerer-lots of flowers from late spring until the end of summer.

I’ve seen it grown at the back of the border, amongst exotics like May Bush, Loropetalum, and in front of Princess Lillies, and I must say, I regret having pulled mine out because the flowers are really lovely.

This plant blends so well with any other plant on the planet.
There are new select forms that are more compact and lower growing.
Alyogyne heugelii Karana-a medium shrub 1.5m by 1.5m wide
Alyogyne heugelii Misty-a medium shrub 1.5m by 1.5m wide; also frost tolerant.
Have a listen to the podcast.
I'm talking with Adrian O’Malley, qualified horticulturist and avid native plant expert.

There’s a lot to choose from but before you run out to the nursery to buy up all the winter flowering ones for your garden. Let’s look at what conditions Grevilleas need to thrive.

Grevilleas like air in the soil, so a light sandy soil is preferable,but you could easily just plant them on a bit of mound mixed with good compost and some light potting mix in it so they  can get established first..

Once they are older they don't seem to mind the heavier soil, but  drainage is a must.

Grevillea 'Peaches and Cream' grows to 1.5m x2m. with cream flowers which change to pink as they age. Flowers all year.

Have a listen to the podcast. 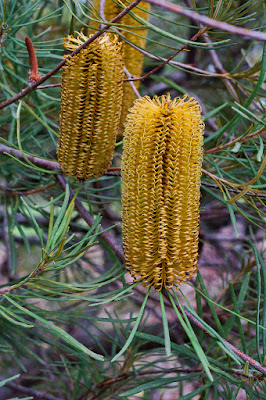 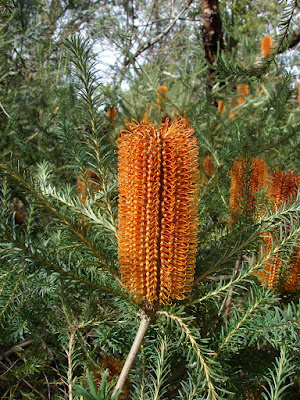 Leaves: The linear dark green leaves are small and narrow, 9–20 mm long and up to 1 mm wide, generally with two small teeth at the tips.
The leaves are crowded and alternately arranged on the branches..
Flowers: cylindrical flower spikes are quite large at 4-6 cm wide and up to 30 cm long
Differences: Banksia ericifolia has much narrower leaves and is fire-sensitive in that it does not have a lignotuber for vegetative regeneration after bushfires. The species relies on seed for regeneration - seeds are retained in the cones for many years and are released by the heat of a fire.

People are afraid to prune Banksias because they think of them as being a bit tricky.
If you’re not sure what type of Banksia you have, then only light pruning.
If you know your Banksia has a woody rootstock (lignotuber) then it can be heavily pruned.
Here's an interesting tidbit: Historically B. ericifolia is supposed to be the first specimen collected by Sir Joseph Banks at Botany Bay in 1770.
For some reason, Banks did not describe this new discovery however and it was left to Carl Linnaeus who later named the genus Banksia in honour of Banks in 1782.

Have a listen to the podcast.

Posted by Real World Gardener at 18:22