For some reason, many gardeners have been reluctant to prune their native plants, thinking that if they did, those plants might never recover or worse, just drop dead.
Then there’s the gardener that’s reluctant to prune something that they’ve just planted because after all, they paid good money for that plant, so why should I cut off the top third as soon as I plant it?
Seems counter intuitive doesn’t it?

If we look back at when native gardens first started to be in vogue in the 70's, this might have been true of many of the cultivars that were grown back then.
Plus, there was the theory that native gardens should be somewhat wild and untamed, much like they are in the bush.
All this did was result in a messy looking 'wild' garden which fell out of favour rather quickly, although not quick enough for some.
Fast forward to the 21st century, and by now, many native plants have been selectively bred or hybridised to produce much healthier, stronger native plants that not only can be pruned but should be pruned to look their best.

So how should we prune our native plants?

Steve and I are not saying that you need to clip everything into a ball to make it look like a formal garden.
Not at all, but you do need to clip plants to reign them in so you have some control over their growth.

A good tip for plants that have a specific flower time such as Golden Penda.
Plants that flower for most of the year like Grevillea 'Robyn Gordon' or 'Grevillea Ned Kelly,' or Peaches and Cream.
In these cases, leave the flowers during the winter months when food is scarce for nectar feeders such as birds and possums. Prune off one-third of growth at the end of winter. 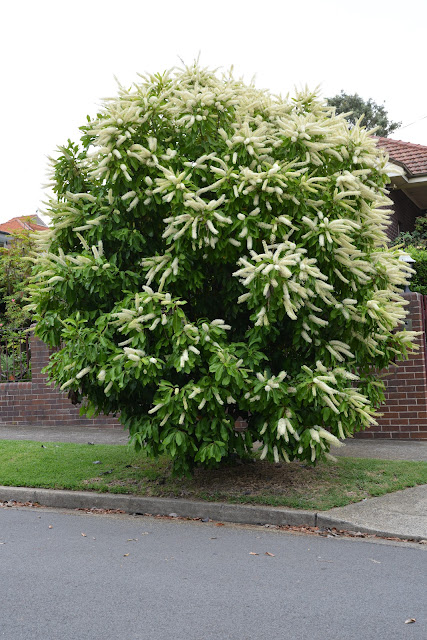 Steve's tip: As soon as you get your plant home, give it a light prune or even a tip prune depending on the size of the plants. Do this often, every 6 or so weeks to make the plant more bush.
Marianne's tip: Some plants respond to constant tip pruning and become more like a shrub than a tree with a straight bole of around 2 metres, for example, Ivory Curl tree or Buckinghamia celsissima.
It might seem risky, but if you only prune lightly, then you’ll be rewarded with a much better looking plant.
Some native plants respond to being pruned close to the ground such as Callistemon (although not too often), Melaleuca 'Claret Tops,' and Breynia cernua.
Look for varieties that suit hedging.
To find out more, listen to the podcast.
PLAY: Native pruning_22nd April 2022

If you have any questions you can email us Realworldgardener@gmail.com or write in to 2rrr, PO Box 644 Gladesville NSW 1675.
Posted by Real World Gardener at 13:15