Starting with the vanilla bean story with herb and spice guru Ian Hemphill, growing winter savory and why you should in vegetable heroes, a new series on old fashioned shrubs for every region in Australia in Design Elements and groundcovers that suit in Plant of the week.

Vanilla planifolia and cvs
Have you ever wondered how and when the spice trade started?
Maybe not but did you know that nutmeg was once worth more by weight than gold?
Also that in the 16th century, London dockworkers were paid their bonuses in cloves?
There was so much to tell with the story of this spice that I had to split it up into two parts.
Here's part 1.
I'm talking with Ian Hemphill from www.herbies.com.au 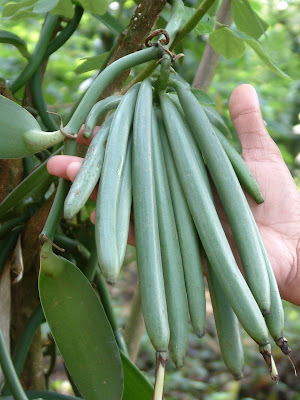 The vanilla bean is  a long green bean. When it's mature the beans are put on curing racks during the day, then wrapped up in woollen blankets at night.
this is done everyday for 15 - 28 days.
It's up to the head curer to judge the readiness of this stage.
After the 28 days have been reached, the beans are then wrapped for a further 2 months.
Vanilla bean curing is very labour intensive and so far hasn't been mechanised successfully enough to give the complexity of aromas reached by the manual method.
Thanks to Ian’s encylopeadic knowledge of the spice trade we can look forward to part 2 of the vanilla bean story next week.
There’ll be plenty of tips on how best to use vanilla in cooking plus a surprise tip that will just delight you. We’ll also re-cap a little tiny bit of the story.
If you have any questions either for me or for Ian, drop us a line to realworldgardener@gmail.com or write in to 2RRR PO Box 644 Gladesville NSW 1675

Winter Savoury
Did you know that Savory, is the Herb of Love!


If you’ve heard of Savory before, you might already know that it’s best known for its use in dishes made with beans.


All Savory’s belong to the mint or Lamiaceae family. They have dark-green, very narrow little leaves for winter savory and light green narrow leaves for summer savory.
The savories can be used fresh or  dried and crushed.
I can’t say that it’s a well know herb but the history of savory goes back about 2000 years and it’s one of the oldest culinary herbs.

There are two distinct varieties of savory - summer and winter. Summer savory is most often used for healing.


Savory has active ingredients called  carvacrol, p-cymene and tannins.
Because it’s an astringent and mild antiseptic if you made a tea from summer savory,  it was said to control diarrhea, stomach-ache and mild sore throat.
Rubbing a sprig of savory on an insect bite will bring instant relief.
How To Grow Savory:What does winter Savory like?
Savory prefers to be planted in soil that's slightly alkaline.


If some of those conditions sound like something you have, you need to put your savour in a pot in a sheltered position. 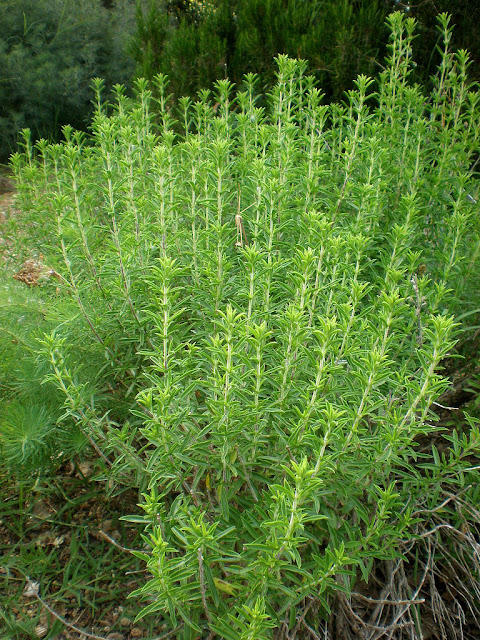 Harvesting and Storage
You can begin to take the leaves from your savory plant as soon as it reaches 13cm or about 6 inches in height. Keeping the plant pruned means you’ll always have some. When they insist on flowering, cut the whole plant and put on a some paper in a warm shady place. When dry, strip the leaves and store in airtight jars or tins. When the seed begins to turn brown, harvest them for next years planting. My plant dies down a bit in winter, but always regrows, so that’s a good reason to get some summer savory for your herb garden.
Tips For The Chef


Why is it good for you?
The Savory herb has many minerals and vitamins which make it an excellent herb to use for medicinal purposes.
The shoots and leaves of this herb are a rich source of zinc, magnesium, calcium, iron, potassium, manganese, and selenium. The vitamins that this herb contains include Vitamin A, Vitamin B-complex group vitamins, Vitamin C, pyridoxine, niacin and thiamine. You would need to eat about 100g of savory leaves which is a bit too much, but making a tea of the leaves would have health benefits as well.
Make baked mozzarella sticks by cutting the cheese into squares, dip in eggs and dredge in bread crumbs with minced savory leaves. Bake in a 180 Degrees C until the cheese just begins to melt.
AND THAT WAS OUR VEGETABLE HERO SEGMENT FOR TODAY!

DESIGN ELEMENTS
Old Fashioned Shrubs: Introduction of 5 part series.
Gone are the days when you had lots of variety in garden centres to choose from.
Now you only get the familiar plants like Murrayas, lilly pillies, star jasmine, viburnum odoratissium, with a spattering of smaller sub-shrubs like Osteospermum with a kaleidoscope of colour.
Thanks for that. Gardeners need colour.
But what happened to the shrubs of old?
Have they just disappeared or can we still get them and which ones suit where?
Let’s find out with this new series on old fashioned shrubs
I'm talking with Peter Nixon, garden Designer and project Manager from Paradisus Garden design.

What could be nicer than a lilac bush ( for colder climates), May bush (most climates) or even a Daphne or two?
You can visit Peter’s garden Sea-Changer’ which is opening Sat 4th May no gate, 10am to 2pm at 21 Lavinia Street Forresters Beach 1 hr from Wahroonga Pacific Motorway on ramp.
For a day out of the city, lunch at Bamboo Buddha Holgate and BURSTING with freshness & flowers. WHAT could be nicer?

Do you want a ground cover that suits shade, still flowers and provides plenty of colour?
William Turner, a 16th century physician and naturalist described it as ‘It is a blacke herbe and it groweth in shaddowy places and moyst groundes.’- 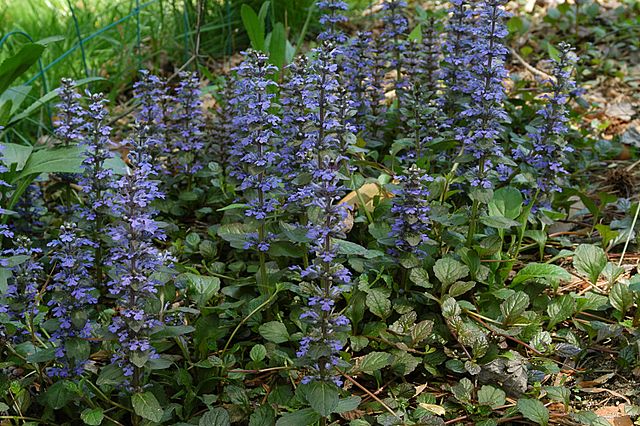 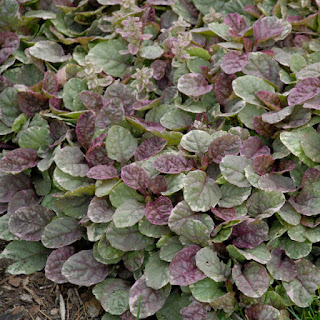 
Spoiler alert, there’s a new variety out now called Ajuga Princess Nadia. Lookout for it in your nearest garden centre.
Not only does Carpet Bugle cope with shade but it copes with sun as long as it gets sufficient watering.
Nobody knows why it’s really called Bugle flower , it’s one of botany’s mysteries.
Posted by Real World Gardener at 17:14