Starting with the vanilla bean story part 2 with herb and spice guru Ian Hemphill, growing a root veggie that some people add to schapps in vegetable heroes, a the new series on old fashioned shrubs for every region in Australia continues in Design Elements and all the perfume you could want in Plant of the week.

Vanilla bean:Vanilla planifolia "Andrews"
Commercially, Vanilla fragrans and Vanilla tahitensis are used but they have less vanillin in them.
Harvesting and curing the vanilla bean is very labour intensive.
Once the green bean has matured, then they are laid out during the day on drying racks.
At night , they are wrapped up in woollen blankets.
This process goes on for 2 months.
I'ts really labour intensive, but if you missed it, you can catch up on my blog for last week.
There was so much to tell with the story of this spice that I had to split it up into two parts.

But this episode is about how we can economise with our hugely expensive cured vanilla bean in cooking.

Plenty of tips on how best to use real vanilla in cooking plus a why not make a vanilla flavoured rum?

Vanilla Bean and Poached Pears:
The rest is mostly synthesized from either guaiacol (which accounts for about 85 percent of it) or

1 Vanilla Bean and champagne OR
1 vanilla bean and sugar syrup of your choice.
Simmer for 30 minutes.
Remove the vanilla bean and store if canister of caster sugar for a week.
This gives you vanilla flavoured caster sugar.
NOTE: As long as the vanilla bean hasn't been used on milk, you can use the bean up to 3 times before discarding.
Here’s why you shouldn’t use imitation vanilla.
Did you know that less than one percent of the world’s vanilla fl lignin.
Guaiacol is a fragrant liquid obtained by distilling wood-tar creosote or guaiac (resin from the guaiacum tree).
If you have any questions either for me or for Ian, drop us a line to realworldgardener@gmail.com or write in to 2RRR PO Box 644 Gladesville NSW 1675

Horseradish
Armoracia rusticana syn. A. lapathifolia
Horseradish is a member of the mustard family or Brassicaceae
You may be wondering what comic book character loved this veggie and what country adds it to their beer and make Schnapps with it?”
If you were a fan of the comic strip that featured Dagwood and his wife Blondie, well you would know that Dagwood ate horseradish.
"Blondie," by Dean Young and Stan Drake.”
But did you also know that Germans still brew horseradish schnapps and some also add it to their beer? 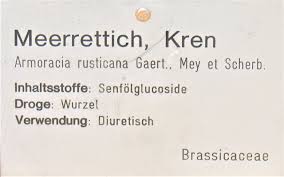 Apparently the Egyptians knew about horseradish as far back as 1500 B.C.
And early Greeks used it as a rub for lower back pain and as an aphrodisiac.
In Germany, it’s called "meerrettich"
In the 1600s, Englishmen loved to eat their beef and oysters with horseradish.
But not only that, the loved it so much, that the English, grew it at inns and coach stations, to make cordials to revive exhausted travellers.
So Why grow Horseradish?
Gardeners grow horseradish for its thick, fleshy white roots.
Did you know that the bite and aroma of horseradish root is totally missing until it’s grated or ground?
That’s because as soon as the root cells are crushed, volatile oils known as isothiocyanate (ISO-THIGH-O SIGH-A-NATE)  are released.


Vinegar stops this reaction and stabilizes the flavour.
Very similar to Wasabi really.
If you’re interested in making your own horseradish, and you don’t want it too hot and bitey, just add the vinegar straight away.
Growing Horseradish
Growing horseradish is easy – the tricky bit is stopping it taking over your garden. 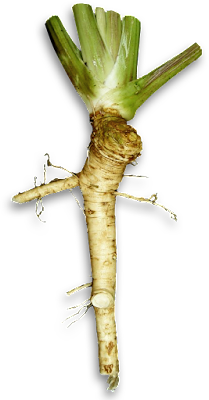 TIP: This deep rooted plant can be used in orchards to open up compacted soils and return nutrients to the soil’s surface.
By far the easiest way to grow Horseradish is from root cuttings.
Now’s the time to get a piece from a friend or your friendly garden club members because Horseradish is propagated by root division in spring or
Don't worry too much about soil or position, other than too much shade because it’ll die off.
Dig out a trench at least 60cm deep – horseradish has extremely long tap roots.
Replace about 40cm of topsoil and then add some compost .
Lay the roots of horseradish on this about 30cm apart and then cover with more soil.
Firm down the soil.
If you can get seed. the time to sow it is in early spring.
Keep your horseradish well-watered.
Next year by mid-autumn if you were lucky enough to have planted it last year either in autumn OR spring, the roots should be ready to harvest.
Dig up all the plants.
Use the larger roots to make horseradish sauce and store the smaller ones in sand for replanting next year.
You could plant some of the smaller shoots in pots – either give them away or sell them once they start showing signs of growth.
By digging up all the plants, you’ll stop the horseradish from getting out of control and taking over your garden.
Although I must say, in my garden it’s extremely well behaved.
I have found suggestions that sinking half of an old rubbish bin into the ground, with its bottom removed stops its spread.
Horseradish is very versatile – not just as a sauce with beef, but it goes well with smoked mackerel, sausages, ham, trout, eggs and avocado.
Why is horseradish good for you?
Horseradish is a natural antibiotic.
If you’re on a low salt diet, then horseradish is really useful as a seasoning.
Horseradish has only 2 calories a teaspoon, is low in sodium and provides dietary fibre.
Where do you get it? Well there’s an online company that has divisions, but they won’t be available until July. Otherwise, the herb section of most nurseries and garden centres do stock this plant.
AND THAT WAS OUR VEGETABLE HERO SEGMENT FOR TODAY!

Old Fashioned Shrubs and Trees for Cool Climate Gardens
Last week I mentioned that gone are the days when you had lots of variety in garden centres to choose from.
So this series is all about what were those old fashioned shrubs.
But we’re not just doing a blanket five but going through each climate zone in Australia, including some of Peter Nixon’s zoning.
Some of these other zones might suit your area as well even though they’re classified as say arid or sub-tropical.
It all depends on whether or not you’ve got a micro-climate in your garden that will suit.
Let’s find out what old fashioned shrubs suit cool temperate areas.
I'm talking with Peter Nixon, garden Designer and project Manager from Paradisus Garden design.

Daphne 'Perfume Princess'
If you love fragrance, you’re probably going to buy plants that aren’t supposed to do well in your district.
Plants like Luculia, or Lilac (Syringia vulgaris) which are for cool climates mostly.
There’s another plant that has a reputation of keeling over without warning, but gardeners still want to grow if because of its high fragrance.
Now, there’s a new variety with flowers double or triple the size of the old species (Daphne odora) and hopefully, a bit more resistant to some of the problems that plagued the predecessor.
So, what so good about it?

Not only are the flowers bigger than the species Daphne, but it flowers longer, can grow anywhere in Australia and it has the strongest fragrance of any Daphne.
A definite must have.