We’re talking the new wave of battery operated tools in part 2 of this segment in Tool Time growing an unusual berry in Vegetable Heroes, starting a new series on lawn alternatives in design elements, plus bloomin' Ranunculus flowers in Talking Flowers.

Battery Operated Garden Tools part 2
Last week, part 1 of the topic of battery operated garden tools was aired because there was so much to be said about them.
This week, it’s part 2 with a brief summary of what points that were touched on in part 1.
So, the new wave of garden tools are battery operated.
Let’s get into the topic
I'm talking with Tony Mattson, general manager of www.cutabovetools.com.au


Batteries for garden tools can be purchased as 3, 4, 5, and 6 Amp Hours.
How long the battery lasts depends on which garden equipment you are using and how much load you will be putting on that particular piece of equipment.
It's advisable to buy two batteries at the initial purchase so that one can be charging while you are using the other.
Typically, recharging batteries takes between 30 - 45 minutes.
TIP: batteries aren't interchangeable between brands.

Make your brand selection based on the range of equipment that meets your needs.
Battery powered tools are easier to start, lighter, have no petrol smell, and best of all are much quieter and cheaper to run.
If you're wondering whether or not a battery operated lawnmower will cut through buffalo or kikuyu lawns. Tony says, no problem at all, and no tread marks on the lawn because the lawnmower is so much lighter.
If you have any questions for me or for Tony, why not write in to Realworldgardener@gmail.com or write in to 2rrr, PO Box 644 Gladesville NSW 1675.

Cape Gooseberry: Physalis peruviana syn. P. edulis  also sometimes called the ground cherry.
Did you know that Cape Gooseberries are thought to have originated in Peru and were one of the few fresh fruits of the early settlers in New South Wales?

So What Does It Look Like?
The cape gooseberry is related to tomatillo, and husk tomato, in fact, all in the genus Physalis.

TIP:Don’t confuse the Cape Gooseberry, Physalis peruviana with an entirely different species referred to as Gooseberry bush. Ribes uva-ursi
The Gooseberry bush will produce very sweet, tart berries, but the cape gooseberry is quite different- and nice!


The best thing is that Cape Gooseberry is very easy to grow and as the fruit are popular with birds and plants can be easily spread around the garden.
The berry is the size of a cherry tomato,1-2 cm in size and is very aromatic and full of tiny seeds.
How you know that the berries are ripe is when they turn a golden orange and drop to the ground.
When to Sow
How to sow the seeds

Sow seed at the usual depth rule-3x the diameter of the seed.
Best planted at soil temperatures between 10°C and 25°C
Space plants: 50 cm apart if you want to go into production otherwise just try one plant first because they do produce quite a few fruits.
Harvest in 3-4 months or 14-16 weeks.
To get the most fruit from your cape gooseberries, they need to be in a sunny place as long as there is no risk of frost.


How Do You Eat Cape Gooseberries.
Cape gooseberry once extracted from its husk, can be eaten raw tasting bit like ordinary tomatoes maybe a bit more zingy. 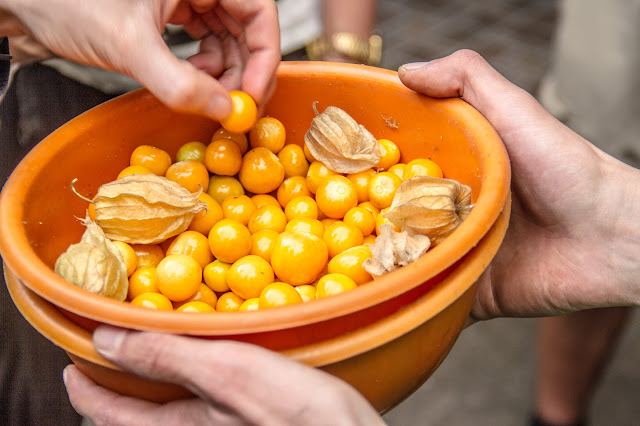 They can be added to salads, desserts and cooked dishes, they are delicious stewed with other fruit, especially apples.
They also go well in savoury dishes with meat or seafood,  as a flavouring, and in jams and jellies.
They can also be dried and eaten much like raisins or other small dried fruit.
Cape gooseberries contain large amounts of pectin, and are therefore suitable for jams and pies
Grab some cape gooseberry seeds from online seed suppliers, sprinkle a packet over your garden & go nuts!
The variety Golden Nugget grows to 1m
Why are cape gooseberries good for You?
Apart from their taste, Physalis is a good source of nutrients, minerals, vitamins.
Vitamins A, C & B, high in protein and rich in iron.
Put some berries in the bottom of a cup and mash them with a
wooden spoon.
Add some water into the cup. The mashed fruit should float, and the seeds will sink to the bottom.
Strain off the mash and water and dry out the seeds on clean tissue paper.
Sow the seeds thinly on the surface and cover them lightly with more compost.
Put the pot in a see-through plastic food bag/mini greenhouse and
tie the end up. This is to keep all the moisture in so the pips don’t
dry out.
The seeds will germinate in a few days, so you will need to check them every day.
If the compost looks dry, give it a little water. When the seeds have
sprouted, remove the plastic bag and put the pot on a sunny
windowsill. Once the seedlings have four or five leaves, they will
need to be potted up in separate pots, using the same compost.
Repot your plants as they grow.
THAT WAS YOUR VEGETABLE HERO FOR TODAY

Lawn alternatives: considerations
Do you have places in the garden where your lawn just will not grow?
Perhaps it's in a shady part where moss seems to appear in winter instead of green lawn.
Or is it under or near trees where the tree root competition is too much and the lawn is patchy?
Then again, you may be just tired of the constant mowing during the warmer months of the year and want to swap mowing for low maintenance lawn alternatives.
So what are the considerations?
Let's find out.I'm talking with Glenice Buck, landscaper and consulting arborist with


www.glenicebuckdesigns.com.au
Lush lawns need lots of maintenance such as watering, fertilising and mowing.
If you live in a region that experiences periods of intense heat and drought, this type of lawn may not be possible to maintain.
Looking at brown lawn is not that much fun so exploring other options that need less frequent irrigation is a good alternative.
Unless you make the right lawn alternative choice, you may be swapping the mowing for the weeding.
Over the coming weeks, Glenice will talk about what lawn alternatives suit high foot traffic and low foot traffic areas.

Ranunculus:
Family:Ranunculaceae also includes anemones, clematis, delphiniums, nigella and hellebores.
Grow from claw-like tuber or corms but now referred to as thickened rhizomes.
Growing tips:
These plants are very hardy and will grow in a wide range of conditions.
If you missed planting them out in autumn for a spring show, treat yourself with a bunch of ranunculus from your favourite florist.
Mercedes Tips: www.floralgossip.com.au 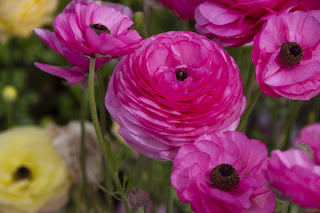 As they prefer to have their roots kept cool and moist, plant Ranunculus species in a sunny or partly shaded position with moist well-drained soil.
Don’t like clay soils.
I'm talking with Mercedes Sarmini florist, and floral therapist.
This video was recorded live during the broadcast of Real World Gardener radio show in Sydney.