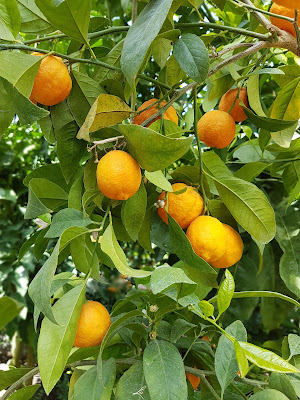 Host Marianne and Steve from www.ecoorganicgarden.com.au are talking about citrus and things to watch out for in Plant Doctor growing an Asian greens in Vegetable Heroes; holly leaves can be native in Plant of the Week plus which flowers are ethylene sensitive in Talking Flowers

NEW Citrus Watch
Citrus trees have their fair share of pests of diseases and control is better if it’s done proactively.
Certain times of the year are crucial in beginning your control program, but don’t worry, it’s not too daunting.

Let’s find out what needs doing
I'm talking with Steve Falcioni of www.ecoorganicgarden.com.au

There are several types of pests

Sap Sucking Pests: control with botanical oils such as eco Oil
Chewing Pests; caterpillars: control with Dipel
Queensland fruitfly: control with pheremone lures, spinosad based pesticides and/or exclusion netting.
Mediterranean fruitfly (found in W.A.) control with spinosad based pesticide and/or exclusion netting.
Timing is the key for pests and diseases because they have a lifecycle which tells us when the pest is most vulnerable or when the diseases is most likely to strike.
This is a good indicator of when control is most effective.
After all, you don’t want to waste your time, energy and money using a product that won’t work as well as it should because it’s the wrong timing.
If you have any questions for me or for Steve, why not write in to Realworldgardener@gmail.com or write in to 2rrr, PO Box 644 Gladesville NSW 1675.

Asian greens.
Many Different Names for Asian Greens.
To some people because there are many different types, have many names which may even have different spellings depending where they come from. Names include Chinese White Cabbage, Chinese Chard, Chinese Mustard Cabbage,  bok choy, pak choy paak tsoi, choy sum  - as I said Confucius...er... confusing!


They all tend to have smooth edges to the leaves.
There are also those cultivars that have pale green stems instead of white, and the leaves are paler green in colour.
Pak choy and bok choy are basically the same plant.
“Bok Choy has a white stem, and pak choy has a green stem.
Choy sum, is also known as the Chinese silverbeet.
Confusing names aside, when to grow them?
Asian greens-can be grown basically anywhere in Australia.
The main commercial crops are Gympie, the Sunshine Coast, Windsor in Sydney, and the Metropolitan area in Melbourne.
Sometimes Asian Greens go to seed too quickly.
Harvesting
Pull them out of the ground then remove the root ball and trim it with a knife. Wash them to remove the sand and the greens are ready to cook.
Asian greens tend to attract insects, which love to eat them. “Aphids, cluster grubs, diamond back moth.
Everything will have a chew on them but it doesn’t matter because even if you’ve got a hole in the leaf, it makes no difference to the cooking or flavour and once these leaves wilt down, you won’t even see the hole.
Why are Asian Greens good for you?
In many Asian cultures, people believe that food should be their medicine.
Bok choy would be a good choice as we’re an excellent source of vitamin C
• Asian greens contain dietary fibre as well as some iron, calcium and folate.
• Also a good source of beta carotene which your body can make into vitamin A. Your eyes need vitamin A.
THAT WAS YOUR VEGETABLE HERO FOR TODAY

Holly Leaved Fuchsia:Graptophyllum ilicifolium
There are those gardeners who think that native plants look straggly or messy and won’t plant them in the garden.
No mixing up of plants for them.
Perhaps the holly leaved fuchsia will have them changing their minds because it looks more like something from the northern hemisphere.

PLAY: Holly Leaved Fuchsia_9th October_2019
Graptophyllum ilicifolium, or holly leaved fuchsia is quite unusual, and may just suit your garden.
Leaves look like those of a holly bush so very useful for Christmas decorations perhaps?
The flowers are fuchsia like, but obviously this plant is tougher than your regular fuchsia because of the tougher leaves.
The flowers appear in spring and summer along the stems.

If you have any questions for me or for Adrian, please write in to realworldgardener@gmail.com
Posted by Real World Gardener at 06:00