Avenues of Trees, Gardens of Rocket and Lawn Alternatives

Marianne talks to Stuart Read from the Australian Garden History Society about Avenues of honour and what they mean in Garden  history segment, growing rocket really fast in Vegetable Heroes;part 2 of lawn alternatives-plants for high traffic areas in Design elements with landscape designer Glenice Buck of  www.glenicebuckdesigns.com.au and the birdsnest fern but not as you know it  in Plant of the Week.

Avenues of Honour
How do Australians remember the fallen or returned from wars?
Is it just built structures such as memorials or is there another way such as an avenue of honour?
In this garden history segment you will discover that there a many other ways to remember those who served in wars, and that these commemorations shall we say, are not confined to capital cities.
Let’s find out what avenues of honour are all about. 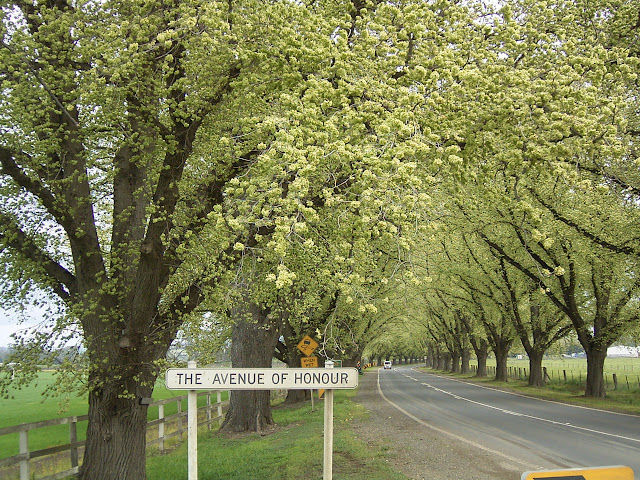 I'm talking with Stuart Read, a member of the National Committee of the Australian Garden History Society.
Avenues of honour were usually trees, but sometimes shrubs.

They were to remember service men and women also nurses who did not return from various wars.
In Australia, there are hundreds of these avenues, particularly in Victoria, but other states also.
Smaller populations in country towns felt that loss more than in bigger cities with figures indicating that 1 in 6 never returned from war.
Often they were on main arterial roads leading into town  or in the main town park or showground.
The "Avenue of Honour," in Ballarat is the longest, measuring 23 miles.
It was started by the girls of the town's textile factory, EL Lucas & Co. in remembrance of husbands and boyfriends that never returned from war.
The first 1000 trees were planted on June 3, 1917 and the last 4000 trees on August 16, 1919.

Trees were often exotic, beeches, oaks and elms at first but later native trees were used.
Roma, in Queensland has an avenue of bottle trees, (Brachychiton rupestris.)
You can search for avenues of honour through www.trove.nla.gov.au just type in what you’re looking for in the search box.
Or www.gardenhistorysociety.org.au and click on the advocacy tab or just search avenues, the list will pop up.
If you have any questions for me or for Stuart, why not write in to Realworldgardener@gmail.com or write in to 2rrr, PO Box 644 Gladesville NSW 1675.


Rocket or Arugula seed has been used as an ingredient in aphrodisiac concoctions dating back to the first century, AD. (Cambridge World History of Food).


Arugula belongs to the Brassicaceae family along with Broccoli, Mustard greens, Kale and Cauliflower.
You won’t be surprised to know then that rocket - Arugula is native to the Mediterranean region. 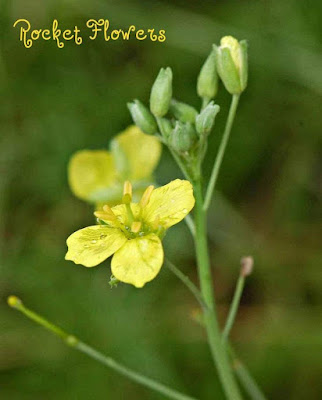 When to sow
What Rocket Likes
Arugula prefers moist, fertile soil, pH 6.0-6.8 but will tolerate a wide pH range.
Arugula is best grown from seed and sow them a couple of weeks apart to have a continuous crop.


Rocket self-seeds readily, although seed is sometimes slow to germinate. Tip: Soak seeds in tepid water with a splash of seaweed solution from Australia’s favourite seaweed company, for 6-8 hours before sowing.  .


Sow the seeds in the garden bed, or in pots or troughs as Arugula is shallow rooted like all salad vegetables
Sow the seeds very shallow and keep the soil moist until seedlings emerge.
The plant grows to about 40cm high so thin out the seedlings so they’re 20cm apart.
Grow in full sun and water well.
Evenly moist soil will help slow bolting and if you don’t want your Rocket or Arugula to be too spicy, then don’t let the plant come under stress.
In warmer areas, grow your rocket in partial shade because even when temps are in the mid 20’s, it starts to droop and yes, become stressed.
If the leaves start looking a bit different-starting to become feathery, this means the plant is about to flower.
Once the flowers appear, the growing season is over.
Rocket-Arugula tolerates some frost. 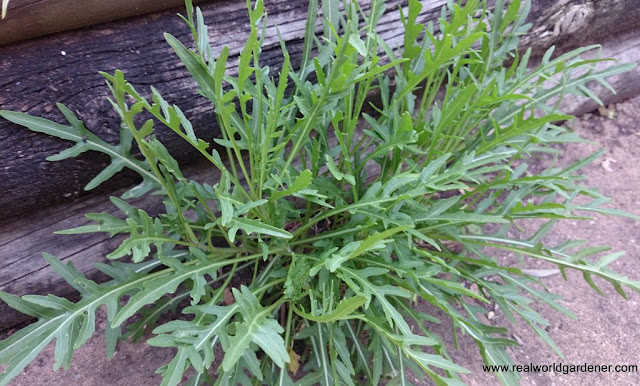 From www.diggers.com.au  you can buy two types of Rocket, the regular as well as Arugula Pronto, which has larger soft leaves and a mild flavour.
Why is it good for you?
Why is rocket or Arugula good for you?
Rocket is rich source of certain phytochemicals thought to be important in preventing cancer cell growth.
Rocket is also a good source of folates, a 100g contains 24% of the daily allowance. Rocket also contains good levels of Vitamin C as well as B complex and vitamin A.
That same 100g of Rocket will give you 90% of your Vitamin K. Vitamin K is linked to bone and brain health.
Lastly, rocket is great as a salad vegetable or why not try making rocket pest? Something different.
THAT WAS YOUR VEGETABLE HERO FOR TODAY

Lawn Alternatives for High Foot Traffic Areas.
So you’ve decided that you no longer want a lawn, but what will you walk on?
Greenery is better than paving because it’s more cooling in summer but of course needs more care.
I must say though, paving, or large concreted areas do have their fair share of maintenance as well. You can get weeds coming up in cracks, then the pavers or concrete get the dirty aged look so needs to be cleaned off with a high pressure water cleaner.
Not good in times of water restrictions.
But can you grow a waterwise plant alternative for high foot traffic areas?
I'm talking with Glenice Buck from www.glenicebuckdesigns.com.au
Let’s find out.

If you have any questions for me or for Glenice, please write in to realworldgardener@gmail.com