Edna Walling was one of Australia’s most influential garden designers of the 20th century but I daresay, not too many people have heard of her.
Edna was Walling was born in 1896, in Yorkshire and grew up in the village of Bickleigh  Devon, England but came to Australia at 17 years of age.
Edna was influenced by her father and studied landscape design at Burnley Horticultural College in Melbourne.
Walling was awarded her government certificate in horticulture in December 1917, and after some years jobbing as a gardener she commenced her own landscape design practice in the 1920s.
Her plans from the 1920s and 1930s show a strong architectural framework with 'low stone walls, wide pergolas and paths – always softened with a mantle of greenery'.
While doing some garden research I happened on one of her most famous creations called Bickleigh Vale in the Melbourne suburb of Mooroolbark in the foothills of the Dandenongs.
Who better to talk about them is someone who has researched Edna Walling for the last 40 years.
I'll be talking with Trisha Dixon, garden author and photographer and sometime tour leader of gardens.
Trisha mentions that she found that actual village that this was modelled on, the real 'Bickleigh Vale ; in Devon, in England.
Listen to parts 1 & 2 of the podcast below.
A quote from https://www.bickleighvalevillage.com.au/properties.html
is this quote
In the early 1920s Edna Walling acquired land at Mooroolbark where she built a house for herself - 'Sonning'. Here she lived and worked, establishing her nursery and gathering around her a group of like-minded people for whom she designed picturesque 'English' cottages and gardens. She named the area Bickleigh Vale village.The houses and outbuildings that were designed or approved by Edna Walling in what she termed 'the English style' include her own home 'Sonning' which was rebuilt in 1936 following the destruction of 'Sonning I' in a fire,
Have a listen to part 1, a bit of Edna’s history and a bit about Bickley Vale.

We’ll continue next with more about the actual village and also more about Edna’s vision in creating beautiful gardens.

Last week, I introduced you to Edna Walling was one of Australia’s most influential garden designers of the 20th century. 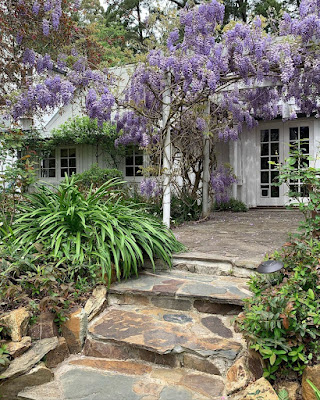 The people that live in the village of about 20 homes, are all in love with Edna's design principles.
In spring, the gardens are like fairlyland, with flowering wisterias, crabapples, flowering cherries, birches, hornbeams. hawthorns, plums, apricots, oaks and elms .
"Edna Walling had a free and easy attitude to garden maintenance and she believed that every window of a house should have a view of the garden, to create the effect of bringing the garden into the house."

Edna Walling came to appreciate Australian flora more and more and started to incorporate many native species in her designs even early on.
I talk again with Trisha Dixon, garden author and photographer.
Let’s find out more


If you have any feedback, email realworldgardener@gmail.com or write in to 2RRR PO Box 644 Gladesville NSW 1675

Posted by Real World Gardener at 18:32