Often there’s a couple of herbs that look alike and even have similar flavour profiles.

If you had them growing together in the herb garden, you may even confuse the two because of how closely they look to each other.
Thyme is the better known herb in Australia, which from the 1950's was commonly used in soups, stews, scones and casseroles.
For some reason, savory is not very well known in Australia, but it’s commonly used America and England.
In England, and America, it's quite popular and in the US, winter savory is a key ingredient in the stuffing for the 'Thanksgiving Turkey.' 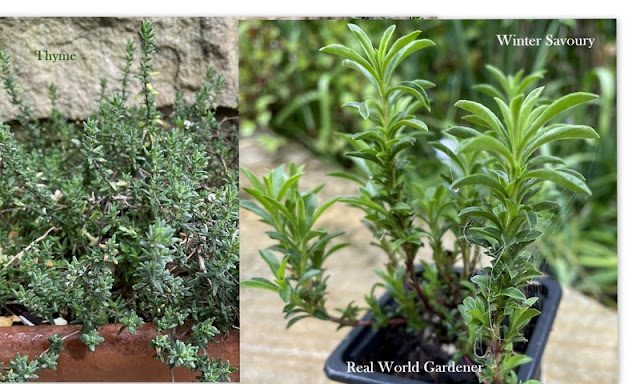 If you rubbed both herbs without knowing which was which, you would most likely think they both were the same herb.
Looking after both herbs
With their tiny leaves, both herbs are adapted to the dry regions of the mediterranean.
Both herbs are in the mint (Lamiaceae) family, but unlike mint, don't  feel you need to give either thyme or winter savory heaps of water with the exception of the hottest days in Australia's summers.

But can you substitute one for the other?

Thyme has the volatile oil: thymol which is a strong natural antiseptic.
You only need to use a small amount to get the flavour, and is a key ingredient in mixed herbs.
The answer is yes, both herbs are interchangeable, but savoury is less pungent than thyme.
Let’s find out more by listening to the podcast.
I'm talking with Ian Hemphill from www.herbies.com.au


If you have any feedback email realworldgardener@gmail.com or write in to 2RRR PO Box 644 Gladesville NSW 1675
Posted by Real World Gardener at 16:03