Slime Mould in the Garden: Friend or Foe?

Slime Mould: What Is It?

What do the words slime mould conjure up in your imagination?
Is it that black stuff growing in the grout and on the tiles in your bathroom?
Or is it that green stuff on your paths on the south side of the house?
You may be surprised to find that it’s neither one of those so where is it lurking?
There are a lot of other moulds that live in the garden some of which are very useful.

Slime moulds are in the kingdom:Protista. 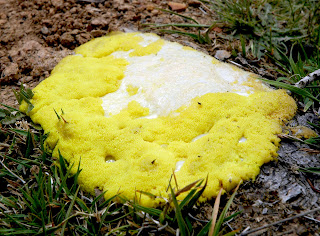 Did you know that slime moulds have a life cycle, and when you are able to observe them, is only part of their lifecycle?

They can grow on grass, logs and pretty much anywhere where the environment is conducive.

Slime moulds are not very well known in Australia, but Tasmania has around 100 species of slime moulds one of which is called 'dog vomit.'

Slime moulds are highly useful in that they break down materials, 80% of which is made available to plants.

The podcast continues with the topic of slime mould but particularly, about the slime mould called phytophthora.

Did you prick up your ears?
Yep, that’s the root rot known as phytophthora which gardeners dread.

Gardeners are often told that phytophthera, in particular Phytophthera cinnamomi,  is a fungi but it's actually a water mould. You may have even heard it called 'root rot.'

Phytophthora cinnamomi lives in the soil and in plant tissues,

During drought or prolonged dry periods , the organisms become dormant chlamydospores which is just a resting spore of Ascomycota.

When environmental conditions are suitable, the chlamydospores germinate, producing mycelia (or hyphae) and sporangia.

The sporangia ripen and release zoospores, which infect plant roots by entering the root behind the root tip.

This organism is very resistant to most chemicals that gardeners can throw at it and doesn't die with soil disturbance..

The best way Botanic gardens have dealt with it is by fencing off affected beds within the gardens so horticulturists and the public don't transfer the spores around the the gardens or indeed, back home to their own gardens.

Drainage was also improved in garden beds so that the organism wasn't able to stay 'live' or active.

Compost is then added to soil to improve the soil so the microorganisms can combat this slime mould.


So know you know the facts and myths about Phytophthora and how to deal with it in your garden.

If you have any questions about slime mould or some feedback why not email us realworldgardener@gmail.com or write in to 2RRR PO Box 644

Posted by Real World Gardener at 15:47