We start with a look at pruning saws and why you might need two in Tool Time,, growing your own super fruit in Vegetable Heroes; part two of a new series “pruning 101” with landscape designer Jason Cornish, in Design elements and a blue flowers in talking flowers.

PRUNING SAWS
There comes a point in your pruning when secateurs, and loppers just won’t do the job.
Do you strain, grit your teeth and pull faces when cutting large branches in your garden that your garden loppers can’t handle?
Let’s face it, the size of the branch is too big but not big enough to call an arborist, so what do you do?
Get a pruning saw and here’s why.
Let’s find out.
I'm talking with Tony Mattson General Manager of www.cutabovetools.com.au

There are two main types of pruning saws and both have different purposes for different types of cutting.
The pruning saw blade is made as a metal blank and the teeth are then machined into the metal.
The metal is then hardened so they don't wear and chrome plated so they don't rust.
Chrome plating will wear off eventually, ( faster on cheaper blades,) so it's important to clean the blade after use and oil the blade with light machine oil.
Tony prefers not to use vegetable oil because it leaves a sticky residue. 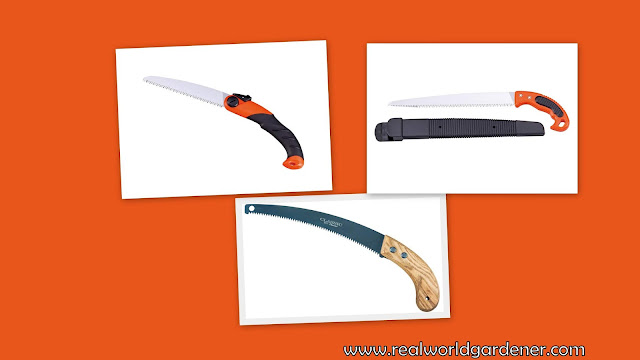 Did you know that pruning saws have less teeth than most woodsaws?
The other difference is that the teeth on pruning saws are larger and sharper, making the job of cutting tree branches easier.

Tony’s Rule: the length of the pruning saw blade determines how big a branch you can cut. Half the length of the blade, is the maximum size of branch that you can cut.
Tony also recommends that , if the chrome coating has worn off, oil your blade after you have used and cleaned it.
If you have any questions for me or for Tony, why not write in to Realworldgardener@gmail.com or write in to 2rrr, PO Box 644 Gladesville NSW 1675.

Blueberries
Would you have thought that the second most popular berry after Strawberries are Blueberries?
Blueberries are the fruit of a shrub that belongs to the heath family which includes cranberries, azaleas and rhododendrons. 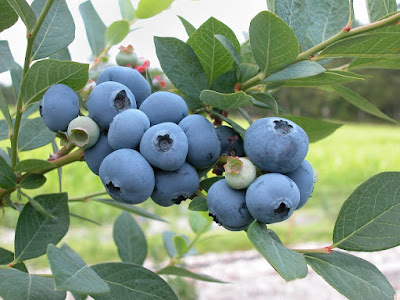 WE all know what blueberries look like from the punnets that are sold in the supermarket, but what do they look like when they’re growing on the plant?
Blueberries grow in clusters and come in sizes from a pea to a small marble.
Did you know that blueberries are one of the only fruits native to North America, but it wasn’t until the early 1950’s that blueberries were first brought to Australia.
Why’s that?
A couple of guys- Messrs Karel Kroon and Ralph Proctor from the Victorian Department of Agriculture trialled growing them.
But, Australia was out of luck there because these guys couldn’t get past the disease problems.
Twenty years later, the Victorian Department of Agriculture tried again.
This time, a chap called David Jones carefully planted and tended to his blueberry seeds and eventually successfully grew several blueberry plants.
Still, it wasn’t until the 1980’s that Blueberries were commercially available.
Where to Grow?
Blueberries like a sunny position but will also get by in some shade (but not too much, otherwise you won’t get too many flowers.


The best time for planting is between late autumn and spring, when plants are sold bare-rooted and are less likely to suffer from transplant shock than at other times of the year.
You can buy containerised blueberry plants all year-round though.
What They Need?
Blueberries need moist soil, good drainage and lots of organic material.
Blueberries are acid loving plants that do best in soils with a pH between 4.5 to 5.5
If you can grow Camellias and Azaleas, you can grow Blueberries.
If you don’t have that ph you will have to add either elemental sulphur (where the pH is too alkaline) or lime / dolomite (where the pH is too acid). If the soil pH is higher the plants may show signs of iron deficiency.
If that sounds too hard, grow you blueberry plant in a pot.
Tip:Very important when growing blueberries. they have a very fine fibrousy root system, just like Azaleas, and this root system needs a porous medium in which to grow, a bit like coarse sand from where they came from.
If you have poor drainage, then grow them in a raised bed or at the very least, on a mound of soil and use lots of mulch.
Or, like me, grow them in a pot, but grow a couple to increase pollination.
So, a little bit fussy there.
When to Grow
Not all blueberry plants are alike, so choose the variety for your region carefully.
Did you know that there are three varieties of blueberry species?


Highbush varieties can be broken down into either Southern Highbush or Northern Highbush.
Gardeners in the know about chill factor will now know, that means a certain amount of hours below 70C.
The highbush variety, grows to 1.5–3 metres, and has many different cultivars.
In Victoria, Tasmania and Southern New South Wales, you are more likely to find the Northern Highbush, high chill variety for sale in your nursery.
Winter chilling  is quite high -(over 1000 hours below 2°C) but they can still tolerate high summer temperatures.


Rabiteyes can also cope with dry conditions, making it right at home in Arid climates too.
And where does the name come from?


Supposedly during the ripening stage when the blueberry is pink, if you look closely you will notice the calyx appears to be little rabbit eyes looking right back at you.


I spoke to a blueberry grower last year and was told to let the shrub establish first.
That means, you must pluck off the flowers in spring so it doesn't set fruit, but the 3rd year you can let it flower.
If you let them establish for the first two years apparently the plants will last a lifetime!
Once your Blueberry shrub is established new stems will come up and fruit for up to four years initially from the tip to down the whole branch.
From the third winter onwards, cut back old, dry stems every winter.
Cut them back either down to ground level or to a vigorous new shoot near the ground.
They first produce sideshoots from the base of the plant soon after flowering in spring. Then in early to midsummer, vigorous growths push up from the base of the bush.
Hard pruning in winter will encourage this renewed growth and result in larger, earlier fruit.
SHARPEBLUE
Generally a tough bush that needs constant picking of the ripe fruit or they’ll get too soft.
MISTY another tough evergreen variety.. It is an early fruiting variety, with light blue, medium to large fruit of excellent flavour.
Blueberries are pest free apart from caterpillars and birds, and if you prune the shrub so its open in the middle it reduces fungal disease.
Selecting and Storing Blueberries –
Pick or buy blueberries that are firm and have an even colour with a whitish bloom.
Important:Blueberries are another fruit that don’t ripen off the bush.
Blueberries should be eaten within a few days of picking or buying.
Ripe berries should be stored in a covered container in the fridge where they will keep for about 1 week.


Don't wash blueberries until right before eating as you’ll remove the bloom that protects the berries' skin from going bad.
If kept a room temperature for more than an hour, the berries will start to spoil.
Blueberries can be frozen.
Why are they good for you?
Blueberries have large amounts of anthocyanins,- antioxidant compounds that give blue, purple and red colour to fruit and vegetables.
Not sure what all the fuss is about? Antioxidants are very well known for their health benefits, especially their ability to reduce damage to our cells and Blueberries contain more antioxidants than most other fruits or vegetables
Blueberries are also a good source of Vitamin C, Vitamin E, manganese and both soluble and insoluble fibre like pectin.
A cup of blueberries will give you 30% of your RDA (Recommended Daily Allowance) of Vitamin C.
Plus they’re low in calories.
If you think they’re too fussy to grow,  for the same price as a cup of coffee, treat yourself to a punnet of Blueberries, eat them straight out of the punnet (wash them of course) and enjoy the health benefits.
AND THAT WAS OUR VEGETABLE HERO SEGMENT