We start with a two part segment on bee-keeping, being cool as a cucumber in Vegetable Heroes; part 4 of lawn alternatives-plants that create living path edges in Design elements and smaller relative of the giant Angophora in plant of the week.

Are you wondering why keep them in the first place?
Well there’s the pollination of flowers, both ornamental and on vegetables in your garden as well as neighbouring gardens, plus the reward of honey by the kilo, not to mention the hive byproduct of beeswax.
Let’s find out about things you need to know about keeping bees in part 1 of this 2 part segment.
I'm talking with John Scot from www.eezybeez.com.au

NOTE:  If you are keen on keeping bees, then you must register with the Department of Primary Industries.

Flow Hive: The bees fill the honey cells and cap them off. When you insert the Flow Key and turn it,  the hone cells are split so that honey flows into the trough, through a tube and into your jar.

We all know what honey is but did you know that that bees make it by gathering nectar from plants and processing it in their stomachs?
They keep the honey in cells, adding an enzyme to ripen it.
It's stored as a food reserve for the colony in winter but, since they make more than they need, beekeepers can collect the surplus.
If you have any questions for me or for John, why not write in to Realworldgardener@gmail.com or write in to 2rrr, PO Box 644 Gladesville NSW 1675.

Cucumbers just love the hot weather, so they’ll germinate and grow quickly at this time of the year.
Cucumbers are a member of the gourd or cucurbita family and have been grown for 4000 years!
Did cucumber start off in India?
No-one’s really sure although some sources point to somewhere in the lower Himalayas where the ancestor of the cucumber was probably a plant with 7 pairs of chromosomes and small, very bitter fruit.
According to legend, in Ancient Rome during the short reign of Emperor Tiberius (14 – 16 AD) he demanded to eat cucumber on every day of the year.
During summer special gardens were tended just for his vegetables, and in winter cucumber was grown on moveable bed frames that were moved to be exposed to the sun, or illuminated with the mirror-stones. 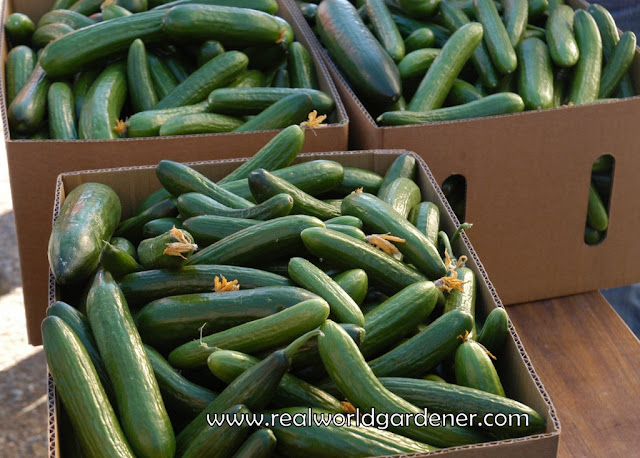 When is the best time to grow some cucumbers?


And where can you grow these delicious cucumbers?
You need to pick a sunny, well-drained spot, because Cucumbers are a subtropical plant, that needs full sun.
Cucumbers also want a decent amount of growing space in your garden.
If you’re short on space, try growing them up vertically on a trellis or even on some netting, perhaps a tomato trellis?
In fact, growing up a trellis would be a great way to avoid all the mildews and moulds that cucumbers are prone to in still humid weather.
So Which Cucumber Should You Grow?
The list is pretty long but you have to decide between regular and burpless varieties to begin with.
Then do you want slicing, or pickling cucumbers?
After that, heirloom or greenhouse varieties.
The burpless varieties don’t need peeling which is an added bonus and would be the way to go if cucumbers repeat on you.
Pickling Cucumbers are shorter, stouter, and have a rougher outer skin, as well as drier flesh that allows them to soak up more of the brine they’re pickled in.
Obviously cucumbers for slicing need to be straight.
The ones you see in the supermarket are regular English cucumbers, usually long thin with a dark green skin.
Great for slicing, and not suitable for pickling.
Let’s start with cucumber “Sweet and Striped” that can grow to a metre long but it will curl.
Armenian cucumber?
This cucumber is a pale almost limey green, it’s burpless with drier flesh so it can be stored up to one month.
Great for slicing or pickling.
My favourite is Cucumber 'Lemon'
'Lemon' is an apple type, heirloom variety, introduced in 1894.
The fruits are round, sweet and crisp with a thin yellow skin and white flesh.
It can be eaten like an apple and is easy to digest.
This cucumber is a good all-rounder because I can be used for salads, pickling and slicing.
For regular eating there’s Lebanese Cucumber 'Beit Alpha'
A Lebanese style of cucumber is thin-skinned, dark green, tender, and burpless.
This one can grow cucumber, up to 30 cm long.
If you pick it when it’s smaller, it has the best flavour whether pickled or fresh and is never bitter.
Lebanese cucumber vines bear early, are disease resistant and very productive
There’s also a number of dwarf varieties if you’d like to grow your cucumbers in pots.
Try Mini White- one of the most popular.
The 10cm long fruit and is best picked when young.
This one gives you lots of fruit per plant and it’s burpless
Or you could try Cucumber Little Potato which as the colour or a potato or Kiwi fruit, with a zesty lemon burpless inner flesh.
Then there’s Cucumber 'Spacemaster'
'Spacemaster' is a bush variety, 90 cm across; suitable for growing in containers. Fruit is slender, dark green, 17 - 22 cm long with a crisp, sweet flavour.
It’s supposed to be disease resistant.
Good for salads or pickles, if picked young.
You’ll need to go to a seed mail order place for some of those, or if you’re in Adelaide or Melbourne, go to the shop in the Botanic Gardens.
The best thing is that Cucumbers aren’t picky about soils.
Parthenocarpic Cucumbers What?


And do you get this information from seed packets?
No because most of the seeds you can buy are monoecious cucumbers that have male and female flowers.


I’m not sure if I’ve ever seen that information on the back of a cucumber seed packet?

Why has my cucumbers not got fruit?

However, do you find your Cucumber seeds sometimes don’t germinate?
When your cucumber has gotten going, water it regularly at the base of the plant, that way the leaves stay dry and you lessen the chances of the leaves getting the white powdery stuff growing on them, powdery mildew disease.
Don’t forget to feed your cucumber plants every couple of weeks with a soluble plant food.
There’s so many now on the market, an some come with seaweed added into them as well.
Disease no 2.
Disease No.3
Crop rotation is important to avoid this disease. There’s no spray of any kind for this problem. Leave the garden bed empty for quite a few months before planting again.

Who out there hasn’t tried a cucumber that’s tasted bitter?

I’m sure some time in your life, that’s happened hasn’t it?
One theory is that the bitterness is caused early in the plant’s development by terpenoid compounds that give a bitter flavour to the entire plant.
Usually the bitterness accumulates at the stem and below the surface of the skin of the cucumber.
According to this theory it’s a genetic problem.
Newer cucumber hybrids seem to have fewer problems with bitterness.


Anyway, it proves that you shouldn’t stress out your cucumbers!
Just like zucchinis, cucumbers have separate male and female flowers. Male flowers come out at first, but don’t worry too much because the female flowers will arrive soon after. Cucumbers should be ready at about 50-60 days and picking fruit often stimulates more to start growing. Some of you probably have realised that if you pick your cucumbers when they’re quite small, this is when they’re at their sweetest.
Twist the cucumbers off the plant or cut the stalk just above the cucumber tip.
They keep for 7-10 days in the fridge then the start to look like something that came from outer space…green and slimy
Why are they good for you?
Cucumbers have lots of Vitamins C but why you should eat them is because the silica in cucumber is an essential component of healthy connective tissue, you know, like muscles, tendons, ligaments, cartilage, and bone.
Cucumbers have some dietary fibre and Cucumber juice is often recommended as a source of silica to improve the complexion and health of the skin, plus cucumber's high water content makes it naturally hydrating—a must for glowing skin.
So eat them quick in sandwiches, salads or juice them for healthy glowing skin!
Happy CUCUMBER growing everyone!
THAT WAS YOUR VEGETABLE HERO FOR TODAY
Posted by Real World Gardener at 06:00