During the last month or more, seeds, and seedlings have been flying off the shelves.
Seed companies and nurseries, normally would expect that at the start of spring, but in these current times, people are turning to good old fashioned growing your own veggies.
That’s a good thing, but what should beginner and advanced gardeners really need to know to be successful.

Over the coming weeks, Glenice will be bringing to you a comprehensive guide to growing your own edible garden. Whether you have a large vegetable garden, a group of planters on a verandah or a few spaces within existing garden beds, you can at least grow some of your own food.
So how do you start?

So if you haven’t started a veggie garden yet think on this.
According to “sustainability Victoria” they reckon that if you grow your own food you
· save money and supplement your household food supply
· save water – home grown food uses less water relative to the amount of food harvested
· reduce your shopping miles
· reduce packaging
· reduce food waste
· enjoy fresher, more nutritious and more delicious food
· know exactly what you're eating (e.g. no pesticides)
· get some exercise and reduce your stress levels.

Finding the right spot for your edible plants can sometimes be a bit of trial and error, however in general most vegetables will require about six hours of good direct sunlight for them to crop well. There are a few exceptions to this rule but in general six hours is the key. You can modify nearly everything else in gardening but you can’t modify or increase the amount of sunshine an area will receive unless you get into grow lights etc which is a whole other topic. 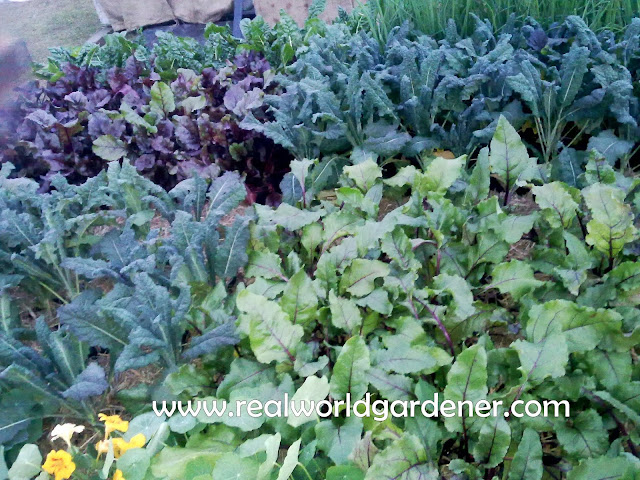 Ideally if you are going to grow vegetables in the ground, in pots or planters, you will need to also have a fairly flat area with no great slopes. If you are going to construct your own above ground beds, you will have a little bit more flexibility as you can build the beds to adapt to a slope. The other issue to think about is that you will be spending a fair amount of time in this space, so you need to ask yourself:
Things to consider:

If you have any questions of course, why not email realworldgardener@gmail.com or glenice@glenicebuckdesigns.com.au
or write in to 2RRR P.O. Box 644 Gladesville NSW 1675.

Garlic-Allium sativum
Garlic comes from the Onion family. Alliaceae
You might have guessed that in medieval times, hanging Garlic outside your door warded off vampires. 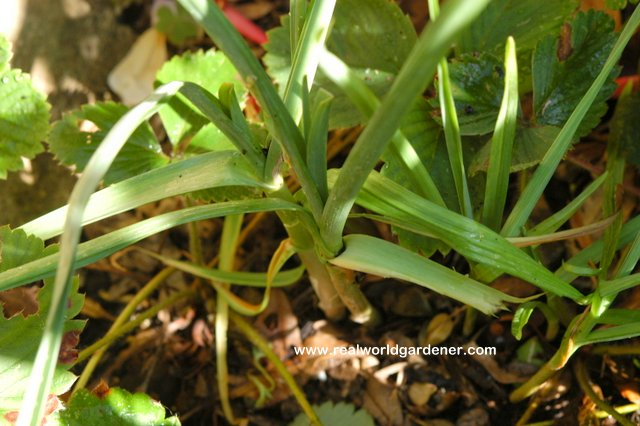 Where does Garlic come from?-a bit of history
Well it’s been around for so long that there’s only records of cultivated Allium longicupis  sometimes known as Wild Garlic, growing naturally in central Asia.

You probably would be surprised to learn that it’s been found in Egyptian tombs as an ingredient used in embalming and as an offering to the gods.
The Greeks and Romans saw garlic as a food that would give strength so that workmen and soldiers would use it.

I think this was mistaken for what the London College of Physicians really recommended during the great plague in 1665, which was to eat the garlic not hang it somewhere.
But then, Louis Pasteur demonstrated, in 1858, that garlic could kill infectious germs.
Garlic was used throughout World War I to treat battle wounds and to cure dysentery. 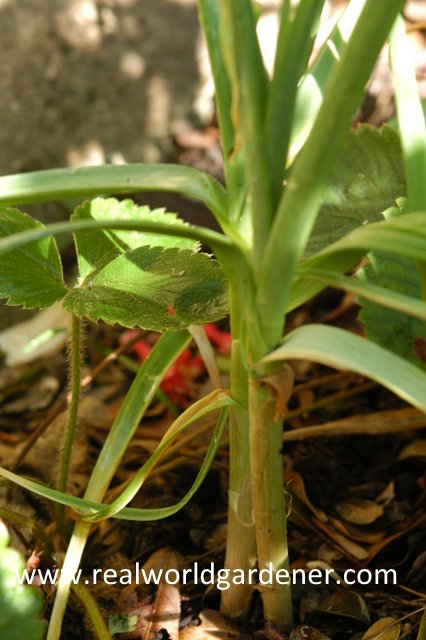 During World War II, garlic was known as "Russian penicillin" because it was so effective in treating wound infections when adequate antibiotics were not available.
Sow direct in garden where they are to grow.

You can plant Garlic bulbs now in all districts of Australia, including cool temperate.
For cool districts, you’re right on the edge of when you can plant, so don’t delay, plant today.


Any soil suitable for onions is good enough for Garlic.
As long as you give garlic a sunny position garlic is easy to grow.
Soil pH should be in the range 5.5 to 7.0.

So you’ve bought your Garlic bulb, what do you do with it?

Do you plant it whole or what? 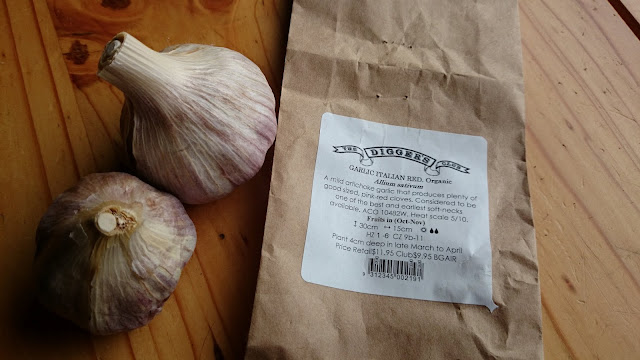 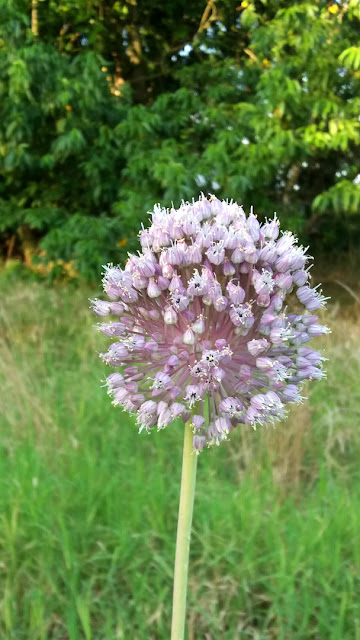 People always ask how do you know when my Garlic is ready?

When they are ready to be dug up, ease bulbs out with a fork, careful not to damage bulbs because these won't store well or go a bit mouldy.
If you’ve got some good weather let them dry in the sun for a few days.
Otherwise hang to dry for 4 weeks in a warm place with good ventilation. 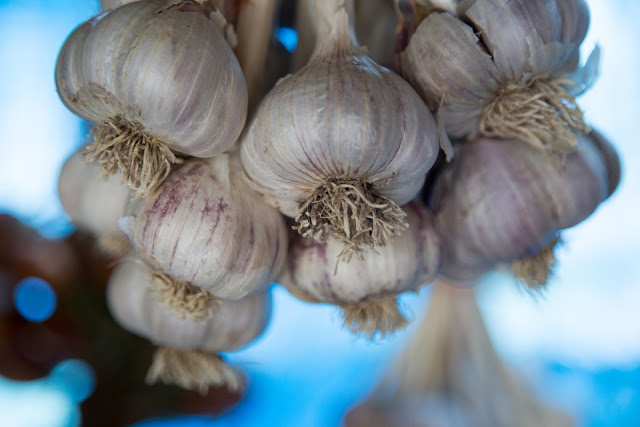 Garlic is a fairly tough and easy-growing plant.
I n better soil with regular watering you will get a better crop.
On poorer soil, and forgetting to water them, you will still get some garlic, only not quite so much.
TIP: Leave a garlic PLANT  to go to seed, and you will probably get plenty of self-sown plants the following year.

Remember most garlic in supermarkets comes from China and has been sprayed with Methyl Bromide in quarantine.
Where to Buy
You can buy Garlic from online suppliers or from organic suppliers. Remember that garlic plants will grow to be 50 – 75cm  tall.
Like onions, there are early, mid season and late varieties available.
There are softneck and hardneck varieties.

Softneck garlic usually doesn’t have a flowerhead and have a longer shelf life (up to 9 months).There’s one called “Italian White” that’s available online.
Monaro purple, and Rocambole- are Hardnecks variety and these do have flowerheads like onions, and usually bigger cloves.
They don’t have as good a shelf life as they're softnecks and prefer cooler winters.
Rocamboles have excellent flavour, glamorous red-purple skins and easily peeled, with a single circle of 6-12 plump cloves.

This is actually a type of leek that you can get these from some markets that are around or from an online bulb company.
Why is it good for you?
There’s so much to be said about the health benefits of garlic. Garlic has been known to, ‘thin the blood’, much in the same way as fish oils.
It can help in lowering blood pressure and evidence is building in its use in lowering blood cholesterol levels.
If you eat only small amounts of garlic – like 1-2 cloves in the family dinner, you won’t get that many nutrients, but if you eat lots of garlic, like they do in Italy, Korea and China, where people there eat as much as eight to 12 cloves per day; then you’ll get  lots of dietary fibre, potassium, iron, zinc and vitamin C.

While that sounds like a lot of garlic, increasing the amount; you eat five or more cloves a day isn’t hard if you use it every time you cook.
Include it in soups, casseroles, even mashed potatoes.
You could also make a habit of snacking on garlicky dishes like hummus with vegetables.
TIP:Many home chefs mistakenly cook garlic immediately after crushing or chopping it, but to maximize the health benefits, you should crush the garlic at room temperature and allow it to sit for about 15 minutes. That triggers an enzyme reaction that boosts the healthy compounds in garlic.
AND THAT WAS YOUR VEGETABLE HERO FOR TODAY

Posted by Real World Gardener at 15:23