Huacatay and Turmeric: A Spicy Combination

Unless you’re a herb and spice expert, there’s bound to be a few spices that you’ve never heard of.
Perhaps Mace isn’t so well known, or asafetida, ajowan, nigella and salem or cubeb peppers.
But then a herb comes along that even stumps the guru that comes on the program, and it even turns out to be a weed.
So what can it be?
Let’s find out .
I'm talking with Ian Hemphill from www.herbies.com.au

Huacatay leaves are a little bit like cilantro or coriander.

The flavour profile is supposed to have notes of basil, spearmint, citrus with notes of tarragon,


Good companion plant for other plants as its reputed to control nematodes.
Huacatay is not available for sale as a herb, but is one you would need to find as 'wild harvest.'
Ian says that he imagines that from 1 kilogram of fresh leaf you would get about 100grams of dried leaf.
If you have any questions of course, why not email realworldgardener@gmail.com or write in to 2RRR P.O. Box 644 Gladesville NSW 1675.

Turmeric or Curcuma longa
Turmeric is one of those spices that I seem to keep mentioning in this segment over the years.
Is it because it’s easy to grow even in the cool subtropics?


A Bit of History:
It‘s native to southwest India and has been grown in cultivation since 500 BCE where it’s an important part of AY-YURR-VEDDIC (Ayurvedic )medicine?
Ayurveda translates to “science of life.”
In India, inhaling fumes from burning turmeric is supposed to alleviate congestion, also turmeric juice was used to help with healing of wounds and bruises, and turmeric paste was applied to all sorts of skin conditions – from smallpox and chicken pox to blemishes and shingles.


You may have seen Buddhist monks with their saffron or yellowy coloured robes.
This is where the natural colouring properties of Turmeric comes in.
Not only is it used to colour Buddhist robes, but has been used to dye clothing and thread for centuries.
What does it look like? 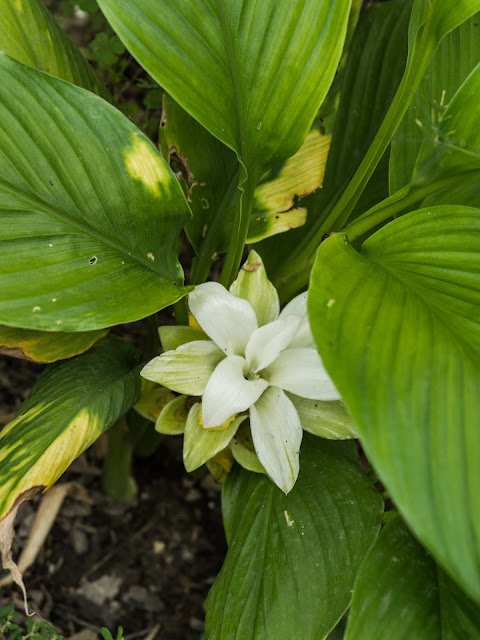 Turmeric grows to about 1 metre in height, with alternating lime green leaves about a metre long; in other words quite big as you’d expect in a rainforest setting.


To get hold of some Turmeric rhizomes you need to go to an organic fruit and veg market where you can buy fresh turmeric roots throughout summer, and you may be able to use those to sprout a plant.
Otherwise, you’ll have to find a local nursery or online store that carries them.
Note: Sometimes it’s sold as hidden Ginger online but we aware that there are different kinds of hidden ginger, but only the rhizomes of Curcuma longa, Curcuma zedoaria and Curcuma aromatica should be grown as spices.


To get your rhizome to sprout just place it in a paper bag in a warmish spot in the kitchen, say by a window and you should see sprouts in a few days.
Once you have a fresh rhizome or root, all you need to do is plant it.
A large root will have several fingers to it.
You can cut these apart and start more than one plant if you like.
Another way to get it to sprout is to just bury the rhizome 5 cm deep into loose potting mix.


If there are any knobs or buds on the root, turn it so they are facing upwards.
Keep it damp but not sopping wet or the root may rot.
In a month or so, you should see sprouts come up.


If you are going to grow turmeric outside, you can transplant it out in late autumn.
For indoor plants, you can do this anytime.
Turmeric is a rhizome so like Jerusalem Artichokes, and Ginger, you plant them in the soil when the rhizomes are dormant
Most books will tell you to plant your rhizome in Spring, but the first lot that I bought withered and shrivelled and it wasn’t until late December that I purchased another lot.
This time the rhizomes were fresher looking and sprouted in a couple of days using the paper bag method.


These were then potted up and placed in a shady spot where all the young plants get put in my garden.
The plant had reached about 30 cm in height by the end of January.
Why grow Turmeric?
Even if you don’t ever make your own curry paste or even cook with Turmeric, the Turmeric plant is very lush and tropical looking.
The whole plant is edible; the roots are boiled, dried and ground up to produce turmeric powder, the leaves make a wrap for steamed fish, and even the flowers can be eaten as a vegetable, like lettuce.
For those that use Turmeric in cooking, did you know that if you make your own Turmeric powder from the rhizomes, it won’t be as bright as the processed store bought version?
Because the root can harbour mould and foodborne pathogens, turmeric is typically irradiated to kill pathogenic bacteria.
Irradiation also creates a brighter powder, but if you don’t want irradiated Turmeric, either buy organic powder or grow your own.
Where to grow it.
Unless you live in a tropical, sub-tropical or temperate zone  in Australia, the majority of people who are going to grow turmeric will have to do it indoors, and it does grow fine in pots.
In temperate regions your Turmeric will die down over winter and return the following year, and  in cold temperate zones unless your ground freezes over it may just pop up again in Spring.
Choose a pot that’s at least 30cm across and the same in depth to give your plants room to grow.
Water your potted turmeric regularly to keep the soil damp, and weekly feedings with mild or diluted fertilizer won’t go astray either.
If you’re growing it in the ground, only put it in full sun if the ground is constantly wet, otherwise shade in the middle of the day is best.
Turmeric will cope with drought and even boggy soils, probably because where it naturally grows, the average rainfall is between 1000 and 2000mm a year
If the plant is stressed by drought or too much sun, the leaves will hang
When to dig it up?
You’ll have to wait at least 8-10 months before you can dig it up.
When the leaves turn yellow and start to dry out that’s when your turmeric is ready to dig up.
You’ll have to dig up the whole plant and cut the rhizome away from the stem.
You might be lucky and manage to dig up only a small part because storing it in the ground will keep it fresh the longest.
If you’re growing it in a pot, it’s pretty simple to turn the rhizome out, take what you want, and then put it all back.
So how else can you use Turmeric?
To store your Turmeric just keep the unpeeled roots in an air-tight container in a cool dark place and the rhizomes should last for up to 6 months.
To use fresh Turmeric in cooking, just slice them thinly or mince instead of using powder.
If you are used to cooking with dry and ground turmeric from the store, take care when using fresh. It’s much stronger in taste and you will only need a small amount to really add its peppery zest to a meal.
WHY ARE THEY GOOD FOR YOU?
You don’t have to make the powder but instead use it as you would fresh ginger.
How about a fruit and veg Turmeric smoothie, or Turmeric pickle?
For sore throats, add 1 teaspoon of Turmeric to your favourite milk, and heat. Add some honey to sweeten.
Drink this before retiring for bed.
It's also an excellent source of fibre, vitamin B6, potassium, and healthy amounts of vitamin C and magnesium.
But you don’t need to eat that much.
Even a small dose has health benefits.
AND THAT WAS YOUR VEGETABLE HERO FOR TODAY

Posted by Real World Gardener at 19:21